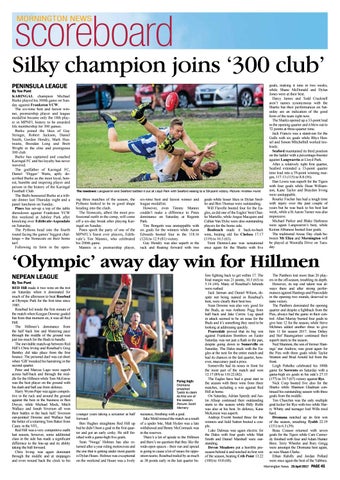 By Toe Punt KARINGAL champion Michael Burke played his 300th game on Sunday against Frankston YCW. The six-time best and fairest winner, premiership player and league medallist became only the 18th player in MPNFL history to be awarded life membership for 300 games. Burke joined the likes of Guy Stringer, Robert Jackson, Daniel Smith, Gordon Hendry, Mark Hustwaite, Brendan Long and Brett Wright in the elite and prestigious 300 club. Burke has captained and coached Karingal FC and his loyalty has never wavered. The godfather of Karingal FC, Daniel ‘Digger’ Watts, aptly described Burke as the most loyal, honest, humble and inspiring player and person in the history of the Karingal Football Club. The Bulls honoured Burke at a tribute dinner last Thursday night and a panel luncheon on Sunday. Pines has set-up a top of the table showdown against Frankston YCW this weekend at Jubilee Park after knocking over Edithvale-Aspendale on Saturday. The Pythons head into the fourth round facing the games’ biggest challenge – the Stonecats on their home turf. Following its form in the open-

The lowdown: Langwarrin and Seaford battled it out at Lloyd Park with Seaford easing to a 59-point victory. Picture: Andrew Hurst

ing three matches of the season, the Pythons looked to be in good shape heading into the clash. The Stonecats, albeit the most professional outfit in the comp, will come off a six-day break after playing Karingal on Sunday. Pines spoilt the party of one of the MPNFL’s finest ever players, Edithvale’s Tim Mannix, who celebrated his 200th game. Mannix is a premiership player,

six-time best and fairest winner and league medallist. However, even Timmy Mannix couldn’t make a difference to Pines dominance on Saturday at Regents Park. Tim Bongetti was unstoppable with six goals for the winners while Aaron Edwards booted four in the 118.16 (124) to 12.9 (81) victory. Guy Hendry was also superb in the ruck and floating forward with two

goals while lesser likes in Dylan Smillie and Ben Thomas were outstanding. Will Flavelle booted four for the Eagles, as did one of the Eagles’ best Charlie Martello, while Angus Macquire and Callan Van Dyke were also outstanding players for the home side. Bonbeach made it back-to-back wins, beating old foe Chelsea 17.17 (119) to 10.5 (65). Trent Dennis-Lane was sensational once again for the Sharks with five

goals, making it nine in two weeks, while Shane McDonald and Dylan Jones were at their best. Darcy James and Todd Cracknell aren’t names synonymous with the Sharks but their performances on Saturday are an indication of the good form of the team right now. The Sharks opened up a 33-point lead in the opening quarter and it blew out to 72 points at three-quarter time. Jack Francis was a stand-out for the Gulls with six goals while Rhys Hensel and Simon MItchelhill worked tirelessly. Seaford maintained its third position on the ladder with a percentage-booster against Langwarrin at Lloyd Park. After a relatively tight first quarter, Seaford extended a 15-point quarter time lead into a 59-point winning margin, 117.13 (115) to 8.8 (56). Dan Lewis was superb for the Tigers with four goals while Dean Williamson, Kane Taylor and Brayden Irving were unstoppable. Rourke Fischer has had a tough time with injury over the past couple of years but he was back to his best last week, while a fit Aaron Turner was also impressive. Michael Parker and Blake Harkness were again Langwarrin’s best, while Keiran Albanese booted four goals. The traditional Anzac Day clash between Mt Eliza and Mornington will be played at Wooralla Drive on Tuesday.

By Toe Punt RED Hill made it two wins on the trot on Saturday when it dominated for much of the afternoon to beat Rosebud at Olympic Park for the first time since 1985. Rosebud led inside the first minute of the match when Keegan Downie goaled but from that moment on, it was all Red Hill. The Hillmen’s dominance from the half back line and blistering pace through the middle of the ground was just too much for the Buds to handle. The inevitable match-up between Red Hill’s Chris Irving and Rosebud’s Greg Bentley did take place from the first bounce. The personal duel was cut short when ‘GB’ tweaked his hamstring in the second quarter. Peter and Marcus Lago were superb across half-back and through the middle for the Hillmen while Tom McEnroe was the best player on the ground with his dash and ball use from defence. Harry Wynn-Pope was again competitive in the ruck and around the ground against the best in the business in Ben Dwyer, while Michael Mock, Mitch Wallace and Jonah Siverson all won their battles in the back half. Siverson out-pointed Downie and Wallace had the better of a returning Tom Baker from Casey in the VFL. Red Hill was a very competitive outfit last season, however, some additional class in the side has made a significant difference to the line-up and its ability taking the ball forward. Chris Irving was again dominant through the middle and at stoppages and even wound back the clock to his

younger years taking a screamer at half forward. Ben Hughes straightens Red Hill up but he didn’t boot a goal in the first quarter and got an early corky. He still finished with a game-high five goals. Sean ‘Nooga’ Holmes has also returned after a year riding motorcross and the one that is getting under most guards is Dylan Hoare. Holmes was exceptional on the weekend and Hoare was a lively

nuisance, finishing with a goal. Jake Mold missed the match as a result of a spider bite, Matt Hyden was a late withdrawal and Benny McCormack was in the reserves. There’s a lot of upside to the Hillmen and there’s no question that they like the wide-open spaces - their run and spread is going to cause a lot of issues for opposition teams. Rosebud trailed by as much as 38 points early in the last quarter be-

fore fighting back to get within 17. The final margin was 21 points, 10.5 (65) to 5.14 (44). Many of Rosebud’s behinds were rushed. Jack Jarman and Daniel Wilson, despite not being named in Rosebud’s best, were clearly their best two. Sean Downie was also very good for the Buds, as was Anthony Pegg from half back and Jake Corrin. Leg speed in attack seemed to be an issue for the Buds and it’s something they need to be looking at addressing quickly. Pearcedale proved that its big win against Frankston Bombers on Easter Saturday was not just a flash in the pan, despite going down to Somerville on Saturday. The Dales stuck with the Eagles at the nest for the entire match and had its chances in the last quarter, however, inaccuracy paid a price. Somerville had its noses in front for the most part of the match and won 12.17 (89) to 110.22 (82). The Eagles have had a great start to the season with three wins from three matches, including a win against Red Hill at home. On Saturday, Adrian Speedy and Justin Allsop continued their outstanding starts to the season while Billy Rolfe was also at his best. In defence, Kane McKenzie was superb. Andrejs Everitt booted three for the winners and Jedd Sutton booted a couple. Luke Dalmau was again electric for the Dales with four goals while Matt Smith and Daniel Marshall were outstanding. Devon Meadows put a horrible preseason behind it and notched its first win of the season, beating Crib Point 13.22 (100) to 10.8 (68).

The Panthers lost more than 20 players in the off-season, troubling its depth. However, its top end talent was always there and after strong performances against Hastings and Pearcedale in the opening two rounds, deserved to taste victory. The Panthers dominated the opening quarter and despite a fightback from the Pies, always had the game in their control. Allan Murray booted four goals to give him 12 for the season, while Steve McInnes added another three to give him 11 for season 2017. Jesse Dehey and Stef Baumgartner continued their superb starts to the season. Ned Shannon, the son of former Hastings’ star Andrew, was great again for the Pies with three goals while Taylor Stratton and Brad Arnold led from the front. Leigh Poholke celebrated his 100th game for Sorrento on Saturday with a game-high six goals in his side’s 27.15 (177) to 10.7 (67) victory against Rye. Nick Corp booted five also for the Sharks while Shannon Gladman continued his outstanding season with three goals from the middle. Tim Churchin was the only multiple goal kicker for Rye with two while Harry Whitty and teenager Joel Wills tried hard. Dromana notched up its first win of the season, smashing Tyabb 22.19 (151) to 6.3 (39). Beau Cosson returned with seven goals for the Tigers while Cam Carmody finished with four and Adam Hunter three. Terry Wheeler and Rory Gregg were amongst the Dromana best again, as was Shaun Clarke. Ethan Rahilly and Jordan Pollard were once again the best of the Yabbies. Mornington News 25 April 2017