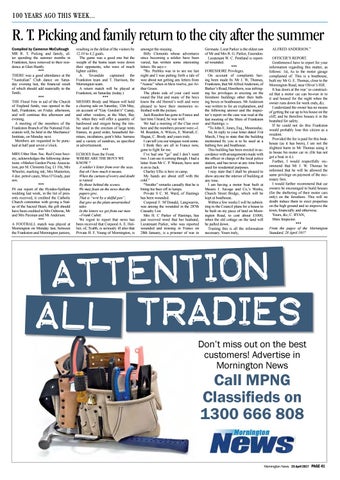 R. T. Picking and family return to the city after the summer Compiled by Cameron McCullough MR R. T. Picking and family, after spending the summer months in Frankston, have removed to their residence at Glen Huntly. *** THERE was a good attendance at the “Australian” Club dance on Saturday evening last, the financial result of which should add materially to the funds. *** THE Floral Fete in aid of the Church of England funds, was opened in the hall, Frankston, on Friday afternoon, and will continue this afternoon and evening. A meeting of the members of the Frankston Branch of the National Federation will, be held in the Mechanics’ Institute, on Monday next. Members are requested to be punctual at half past seven o’clock. *** MRS Utber Hon. Sec. Red Cross Society, acknowledges the following donations :–Market Garden Picnic Association, per M. Clements Esq. £1 10s; Mrs Wheeler, marking ink; Mrs Masterton, 4 doz. petrol cases; Miss O’Grady, pair sox. *** IN our report of the Hyndes-Spillane wedding last week, in the list of presents received, it credited the Catholic Church committee with giving a Statue of the Sacred Heart, the gift should have been credited to Mrs Osborne, Mr and Mrs Paxman and Mr Anderson. *** A FOOTBALL match was played at Mornington on Monday last, between the Frankston and Mornington juniors,

resulting in the defeat of the visitors by 12.10 to 4.2 goals. The game was a good one but the weight of the home team wore down their opponents, who were of much lighter calibre. A. Tevandale captained the Frankston team and T. Harrison, the Mornington team. A return match will be played at Frankston, on Saturday (today.) *** MESSRS Brody and Mason will hold a clearing sale on Saturday, 12th May, on account of “Gay Gordon’s” Camp, and other vendors, at the Mart, Bay St. when they will offer a quantity of hardwood and oregon being the timber used in the erection of large tents frames, in good order, household furniture, incubators, gent’s bike. harness and a variety of sundries, as specified in advertisement. *** ECHOES from the Front. WHERE ARE THE BOYS WE KNOW ? A soldier’s letter from over the seas. But oh I how much it means. When the curtain of worry and doubt is raised, By those behind the scenes. We may feast on the news that the papers give, That is “writ by a skilful pen”; But give us the plain unvarnished tales In the letters we get from our men –Frank Cubitt. We regret to report that news has been received that Corporal A. E. Hollier, of, Tyabb, is seriously ill also that Private H. F. Young of Mornington, is

amongst the missing. Billy Clements whose adventures since becoming a soldier have been varied, has written some interesting letters. He says – “Ro. Peebles was in to see me last night and I was putting forth a tale of woe about not getting any letters from “Aussie” when in blew twelve, per Arthur Green. The photo side of your card went round the Hut and many of the boys know the old Hermit’s well and were pleased to have their memories refreshed with the picture. Jack Reardon has gone to France and last time I heard, he was well. We had a meeting of the Clan over here and the members present were.–J. M. Reardon, A. Wilcox, E. Worrall, C. Hagan, C. Brody and yours truly. I can tell you our tongues went some. I think they are all in France now, gone to fight for me. I’ve had one “go” and I don’t want two. I can see it coming though. I had a letter from Mr C. P. Watson, have sent it on to Jack. Charley Ellis is here in camp. My hands are about stiff with the cold.” “Smitho” remarks casually that he is biting his beer off in lumps. Private S C. M. Ward, of Hastings has been wounded. Corporal F. M’Donald, Langwarrin, was among the wounded in the 287th Casualty List. Mrs H. C Parker of Hastings, has just received word that her husband, Lieutenant Parker, who was reported wounded and missing in France on 28th January, is a prisoner of war in

Germany. Lieut Parker is the eldest son of Mr and Mrs R. G. Parker, Essendon. Lieutenant W. C. Pentland is reported wounded. *** FORESHORE Privileges. On account of complaints having been made by Mr J. W, Thomas, Frankston, that Mr Alfred Anderson, of Barker’s Road, Hawthorn, was infringing his privileges in erecting on the foreshore buildings other then bathing boxes or boathouses. Mr Anderson was written to for an explanation, and the following answer and the inspector’s report on the case was read at the last meeting of the Shire of Frankston and Hastings :– “To John E. Jones, Esq., Moorooduc. Sir, In reply to your letter dated 31st March, I beg to state that the building mentioned by you is to be used as a bathing box and boathouse. This building has been erected in accordance with arrangements made with the officer in charge of the local police station, and has never at any time been used for residential purposes. I may state that I shall be pleased to show anyone the interior of building at any time. I am having a motor boat built at Messrs J. Savage and Co,’s Works, Church Street Bridge, which will be kept at boathouse. Within a few weeks I will be submitting to the Council plans for a house to be built on my piece of land on Mornington Road, to cost about £1000, when the old cottage on the land will be pulled down. Trusting this is all the information necessary. Yours truly,

ALFRED ANDERSON.” OFFICER’S REPORT. Gentlemen–I have to report for your information regarding this matter, as follows: 1st, As to the motor garage complained of: This is a boathouse, built my Mr G. E. Thomas, close to the Mornington Road, near Oliver’s Hill. It has doors at the rear’ so constructed that a motor car can be–run in to it and housed for the night when the owner runs down for week ends, &c. I understand the owner has no means of getting the car up to his house on the cliff, and he therefore houses it in the boatshed for safety. If he could not do this Frankston would probably lose this citizen as a resident. Provided the fee is paid for this boathouse (as it has been), I see not the slightest harm in Mr Thomas using it to house his motor car in. (He has not got a boat in it.) Further, I would respectfully recommend that Mr J. W. Thomas be informed that he will be allowed the same privilege on payment of the necessary fees. I would further recommend that car owners be encouraged to build houses (for the sheltering of their motor cars only) on the foreshore. This will no doubt induce them to erect properties on the high ground and so improve the town, financially and otherwise. Yours, &c, C. RYAN, Shire Inspector. *** From the pages of the Mornington Standard, 28 April 1917