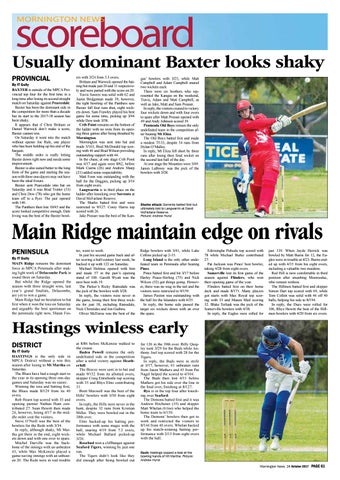 By IT Gully BAXTER is outside of the MPCA Provincial top four for the first time in a long time after losing its second straight match on Saturday against Pearcedale. Baxter has been the dominant side in the competition for more than a decade but its start to the 2017-18 season has been shaky. It appears that if Chris Brittain or Daniel Warwick don’t make a score, Baxter cannot win. On Saturday it went into the match without opener Joe Rule, one player who has been holding up his end of the bargain. The middle order is really letting Baxter down right now and needs some improvement. Baxter is also suited better to the long form of the game and starting the season with three one-dayers may not have been the ideal fixture. Baxter sent Pearcedale into bat on Saturday and it was Brad Trotter (53) and Chris Dew (78) who got the home team off to a flyer. The pair opened with 140. The Panthers then lost 10/45 and the score looked competitive enough. Dale Irving was the best of the Baxter bowl-

ers with 3/24 from 5.3 overs. Brittain and Warwick opened the batting but made just 20 and 11 respectively and were parted with the score on 20. Travis Sawers was solid with 62 and Justin Bridgeman made 39, however, the tight bowling of the Panthers saw Baxter fall four runs shot, eight wickets down. Sam Frawley played his best game for some time, picking up 3/44 while Dew took 3/58. Crib Point remains on the bottom of the ladder with no wins from its opening three games after being thrashed by Mornington. Mornington was sent into bat and made 5/163, Brad McDonald top scoring with 46 and Brad Wilson providing outstanding support with 44. In the chase, at one stage Crib Point was 4/17 and again were 8/62, before Mark Cairns (26) and Andrew Sharp (21) added some respectability. Matt Foon was outstanding with the ball for the Doggies, picking up 3/14 from eight overs. Langwarrin is in third place on the ladder after knocking over Sorrento at David McFarlane Reserve. The Sharks batted first and were restricted to 9/127. Corey Harris top scored with 26. Jake Prosser was the best of the Kan-

gas’ bowlers with 3/25, while Matt Campbell and Adam Campbell snared two wickets each. There were six brothers who represented the Kangas on the weekend, Travis, Adam and Matt Campbell, as well as Jake, Matt and Sam Prosser. In reply, the visitors cruised to victory four wickets down and with four overs to spare after Matt Prosser opened with 49 and Andy Johnson scored 39. Peninsula Old Boys remain the only undefeated team in the competition after beating Mt Eliza. The Old Boys batted first and made a modest 7/133, despite 54 runs from Dylan O’Malley. In reply, Mt Eliza fell short by three runs after losing their final wicket on the second last ball of the day. At one stage the Mounties were 5/49. James LaBrooy was the pick of the bowlers with 3/28.

ter, went to work. In just his second game back and after scoring a half-century last week, he backed it up with 122 on Saturday. Michael Holmes opened with him and made 57 in the pair’s opening stand of 100. Gareth Wyatt was the next best with 19. The Parker’s Ricky Ramsdale was the pick of the bowlers with 3/28. In reply, the visitors were never in the game, losing their first three wickets for just 18, including Ramsdale, Nick Christides and Jon Guthrie. Oliver McEnroe was the best of the

Ridge bowlers with 3/41, while Luke Collins picked up 2-15. Long Island is the only other undefeated team in Peninsula after beating Pines. Pines batted first and hit 3/17 before Harley Peace-Stirling (75) and Nick Wilcox (52) got things going. However, there was no wag in the tail and the visitors were restricted to 9/159. James Paxton was outstanding with the ball for the Islanders with 4/35. In reply, the home side passed the target six wickets down with an over the spare.

By IT Gully MAIN Ridge remains the dominant force in MPCA Peninsula after making light work of Delacombe Park in round three on Saturday. But whilst the Ridge opened the season with three straight wins, last year’s grand finalists, Delacombe, are yet to win a game. Main Ridge had no hesitation to bat first when it won the toss on Saturday and arguably the best sportsman on the peninsula right now, Shaun Fos-

Edirisinghe Pubudu top scored with 78 while Michael Burke contributed 27. Pat Jackson was Pines’ best bowler, taking 4/28 from eight overs. Somerville lost its first game of the season against Flinders, who won their opening game of the year. Flinders batted first on their home deck and made 8/171. Many players got starts with Max Royal top scoring with 33 and Mason Mail scoring 32. Blake Terlaak was the pick of the Somerville bowlers with 4/38. In reply, the Eagles were rolled for

just 139. When Jayde Herrick was bowled by Matt Burns for 12, the Eagles were in trouble at 4/23. Burns ended up with 4/15 from his eight overs, including a valuable two maidens. Red Hill is now comfortable in third position after smashing Moorooduc, who remain winless. The Hillmen batted first and skipper Simon Dart top scored with 69, while Tom Collett was solid with 46 off 40 balls, helping his side to 8/194. In reply, the Ducs were rolled for 106, Rhys Hewitt the best of the Hillmen bowlers with 4/20 from six overs.

By IT Gully HASTINGS is the only side in MPCA District without a win this season after losing to Mt Martha on Saturday. The Blues have had a tough start to the year in its opening three one-day games and Saturday was no easier. Winning the toss and batting first, the Blues made 8/129 from its 40 overs. Rob Hearn top scored with 35 and opening partner Nathan Hunt contributed 27. Sean Hewitt then made 24, however, losing 4/17 in the middle order cost the visitors. Steve O’Neill was the best of the bowlers for the Reds with 3/34. In reply, although shaky, Mt Martha got there in the end, eight wickets down and with one over to spare. Mitchel Darville was the backbone of the innings with an unbeaten 43, while Max McKenzie played a game-saving innings with an unbeaten 20. The Reds were in real trouble

at 8/86 before McKenzie walked to the crease. Baden Powell remains the only undefeated side in the competition after a solid victory against Heatherhill. The Braves were sent in to bat and made 9/152 from its allotted overs, skipper Craig Entwhistle top scoring with 35 and Rhys Elmi contributing 31. Brett Maxwell was the best of the Hills’ bowlers with 3/30 from eight overs. In reply, the Hills were never in the hunt, despite 32 runs from Kristian Miller. They were bowled out in the 38th over. Elmi backed-up his batting performance with some magic with the ball, snaring 4/19 from 7.2 overs, while Michael Ballard picked-up 3/20. Rosebud won a cliffhanger against Seaford Tigers, winning by just one run. The Tigers didn’t look like they did enough after being bowled out

for 126 in the 39th over. Billy Quigley took 3/29 for the Buds while Anthony Joel top scored with 28 for the Tigers. In reply, the Buds were in strife at 3/17, however, 61 unbeaten runs from Jason Mathers and 45 from Pat Nagel helped the scored to 4/104. The Buds then lost 4/11 before Mathers got his side over the line in the final over, finishing at 8/127. Rye is in the top four after knocking over Seaford. The Demons batted first and it was Andrew Hitchener (35) and skipper Matt Whelan (61no) who helped the home team to 6/150. The Demons’ bowlers then got to work and restricted the visitors to 8/144 from 40 overs. Whelan backed up his match-winning batting performance with 2/13 from eight overs with the ball.