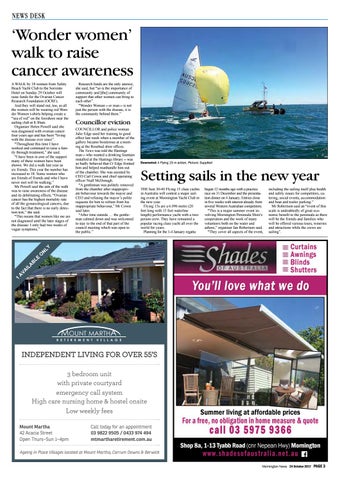 ‘Wonder women’ walk to raise cancer awareness Research funds are the only answer, she said, but “so is the importance of community and [the] community of support that other women can bring to each other”. “Wonder Woman – or man – is not just the person with the disease, it is the community behind them.”

Councillor eviction COUNCILLOR and police woman Julie Edge used her training to good effect last week when a member of the gallery became boisterous at a meeting at the Rosebud shire offices. The News was told the Hastings man – who wanted a drinking fountain installed at the Hastings library – was so badly behaved that Cr Edge fronted him and helped manhandle him out of the chamber. She was assisted by CEO Carl Cowie and chief operating officer Niall McDonagh. “A gentleman was politely removed from the chamber after inappropriate behaviour towards the mayor and CEO and refusing the mayor’s polite requests for him to refrain from his inappropriate behaviour,” Mr Cowie said later. “After time outside … the gentleman calmed down and was welcomed to stay to the end of that part of the council meeting which was open to the public.”

Setting sails in the new year THE best 30-40 Flying 15 class yachts in Australia will contest a major sailing event at Mornington Yacht Club in the new year. Flying 15s are a 6.096 metre (20 feet long with 15 feet waterline length) performance yacht with a twoperson crew. They have remained a popular racing class yacht all over the world for years. Planning for the 1-4 January regatta

began 12 months ago with a practice race on 31 December and the presentation dinner on 4 January. Entries close in five weeks with interest already from several Western Australian competitors. “This is a major summer event involving Mornington Peninsula Shire's cooperation and the work of many volunteers both on the water and ashore,” organiser Ian Robertson said. “They cover all aspects of the event,

including the sailing itself plus health and safety issues for competitors, catering, social events, accommodation and boat and trailer parking.” Mr Robertson said an “event of this scale is undoubtedly of great economic benefit to the peninsula as there will be the friends and families who will be offered various tours, wineries and attractions while the crews are sailing”.

A WALK by 18 women from Safety Beach Yacht Club to the Sorrento Hotel on Sunday 29 October will raise funds for the Ovarian Cancer Research Foundation (OCRF). And they will stand out, too, as all the women will be wearing red Wonder Women t-shirts helping create a “sea of red” on the foreshore near the sailing club at 8.30am. Organiser Helen Powell said she was diagnosed with ovarian cancer four years ago and has been “living with the disease ever since”. “Throughout this time I have worked and continued to raise a family through treatment,” she said. “I have been in awe of the support many of these women have been shown. We did a walk last year as six friends. This year the number has increased to 18. Some women who are friends of friends and who I have never met will be walking.” Ms Powell said the aim of the walk was to raise awareness of the disease and its debilitating effects. “Ovarian cancer has the highest mortality rate of all the gynaecological cancers, due to the fact that there is no early detection test,” she said. “This means that women like me are not diagnosed until the later stages of the disease: I only had two weeks of vague symptoms.”

For a free, no obligation in home measure & quote