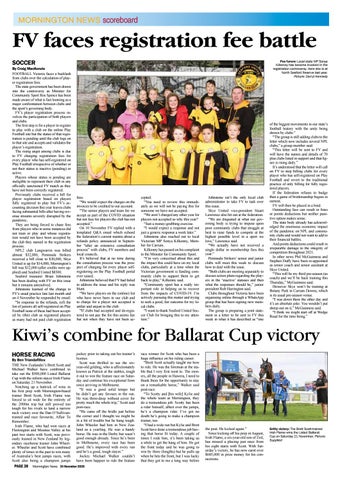 By Craig MacKenzie FOOTBALL Victoria faces a backlash from clubs over the calculation of player registration fees. The state government has been drawn into the controversy as Minister for Community Sport Ros Spence has been made aware of what is fast looming as a major confrontation between clubs and the sport’s governing body. FV’s player registration process involves the participation of both players and clubs. The first step is for a player to register to play with a club on the online Play Football site but the status of that registration is pending until the club logs on to that site and accepts and validates the player’s registration. The rising angst among clubs is due to FV charging registration fees for every player who has self-registered on Play Football irrespective of whether or not their status is inactive (pending) or active. Players whose status is pending are ineligible to represent their club in any officially sanctioned FV match as they have not been correctly registered. Previously clubs received a bill for player registration based on players fully registered to play but FV’s accounting decision this year leaves clubs facing substantial bills after having revenue streams severely disrupted by the pandemic. They are being forced to chase fees from players who in some instances did not train or play and whose registration would not have been accepted by the club they named in the registration process. NPL2 club Langwarrin was billed almost $32,000, Peninsula Strikers received a bill close to $30,000, Skye United is up for $14,000, Mornington’s bill was $12,000 (after credits were applied) and Seaford United $8500. Seaford treasurer Brian Johnstone has been dealing with FV on this issue but it remains unresolved. Johnstone learned of the change to FV’s usual practice late last month and on 4 November he responded by email: “In response to the refunds, (of) the list of juniors all self-registered on Play Football none of these had been accepted by (the) club as registered players as many had not paid club registration

fees. “We would expect the charges on the invoices to be credited to our account. “The senior players and team fee we accept as part of the COVID situation but not fees for players the club has not accepted.” On 10 November FV replied with a templated Q&A email which echoed the federation’s current mantra about a refunds policy announced in September “after an extensive consultation process” with clubs, FV members and local councils. It’s believed that at no time during the consultation process was the prospect of charging for every player selfregistering on the Play Football portal ever raised. Johnstone believed that FV had failed to address the issue and his reply was blunt. “We have players on the (online) list who have never been in our club and to charge for a player not accepted is unfair and unjust to the club. “If clubs had accepted and de-registered to not pay the fee this seems fair but not when they have not been ac-

cepted. “You need to review this immediately as we will not be paying this for someone we have not accepted. “We aren’t charged any other year for players not accepted so why this year? “Just a money-grabbing exercise. “I would expect a response and not just a generic response a week later.” Johnstone also reached out to local Victorian MP Sonya Kilkenny, Member for Carrum. Kilkenny has passed on his complaint to the Minister for Community Sport. “I’m very concerned about this and the impact this could have on my local clubs, particularly at a time when the Victorian government is funding community clubs to support them to get back to play,” Kilkenny said. “Community sport has a really important role in helping us to recover from the impacts of COVID-19. I’m actively pursuing this matter and trying to seek a good, fair outcome for my local clubs. “I want to thank Seaford United Soccer Club for bringing this to my attention.”

Johnstone isn’t the only local club administrator to take FV to task over this issue. Skye United vice-president Stuart Lawrence also hit out at the federation. “We are disgusted at what our governing body is trying to impose upon poor community clubs that struggle at best to raise funds to compete at the highest possible level in a sport we love,” Lawrence said. “We actually have not received a single dollar in membership fees this year.” Peninsula Strikers’ senior and junior clubs will meet this week to discuss how to deal with the issue. “Both clubs are meeting separately to discuss action plans regarding the players in the ‘inactive’ statuses and then what the responses should be,” junior president Rob Harrington said. Clubs throughout Victoria have been organising online through a WhatsApp group that has been signing new members daily. The group is preparing a joint statement in a letter to be sent to FV this week in what it has described as “one

of the biggest movements in our state’s football history with the unity being shown by clubs.” “The group is still adding clubs to the letter which now includes several NPL clubs,” a group member said. “This letter will be sent to FV and will have the names and details of 70 plus clubs listed in support and that figure is rising daily.” It’s understood that the letter will call on FV to stop billing clubs for every player who has self-registered on Play Football and revert to the traditional practice of only billing for fully registered players. If the federation refuses to budge then a game of brinkmanship begins in earnest. FV will then be placed in a bind. Outstanding fees can result in fines or points deductions but neither punitive option makes sense. The state body already has acknowledged the enormous economic impact of the pandemic on NPL and community clubs and would not want to add to their financial battles. And points deductions could result in irreparable damage to the integrity of competition throughout 2021. In other news Phil McGuinness and Stephen Duffy have been re-appointed as senior coach and senior assistant at Skye United. “This will be my third pre-season (as coach) and we’ll be back training this Thursday,” McGuinness said. However Skye won’t be training at Botany Park in Carrum Downs, which is its usual pre-season venue. “I was down there the other day and it’s an absolute joke. You wouldn’t put sheep out on it,” McGuinness said. “I think we might start off at Wedge Road for the time being.”

By Ben Triandafillou THE New Zealander’s Brett Scott and Michael Walker have combined to take out the $500,000 Listed Ballarat Cup with the inform stayer Irish Flame on Saturday 21 November. Notching up a hattrick of wins in his first prep with Mornington-based trainer Brett Scott, Irish Flame was forced to sit wide for the entirety of the 2000m trip but still proved too tough for his rivals to land a narrow neck victory over the Dan O’Sullivantrained and race favourite, Affair To Remember. Irish Flame, who had won races at Flemington and Moonee Valley at his past two starts with Scott, was previously trained in New Zealand by legendary racehorse trainer John Wheeler. Wheeler and Scott have combined plenty of times in the past to win many of Australia’s best jumps races, with Scott also being a champion jumps

jockey prior to taking out his trainer’s licence. Scott was thrilled to see the sixyear-old gelding, who is affectionately known as Patrick at the stables, tough it out to win the feature race on Saturday and continue his exceptional form since arriving in Melbourne. “It was a good solid tempo but he didn’t get any favours in the run. He was three-deep without cover for pretty much the whole trip,” Scott said post-race. “He came off the bridle just before the corner and I thought we might be in a bit of trouble but he hung tough. John Wheeler had him in New Zealand as a yearling. He was a handy horse. He was in the Derby but wasn’t good enough already. Since he’s been in Melbourne, every race has been good. He’s improved with every run and he’s a good, tough stayer.” Jockey Michael Walker couldn’t have been happier to ride the feature

race winner for Scott who has been a huge influence on his riding career. “Brett Scott actually taught me how to ride. He was the foreman at the stable that I very first went to. The owners, all the people in Hawera, I need to thank them for the opportunity to stay on a remarkable horse,” Walker said post-race. “To Scotty and [his wife] Kylie and the whole team at Mornington, they do a tremendous job. Scotty has been a rider himself, albeit over the jumps, he’s a champion rider. I’ve got no doubt he’s going to make a champion trainer, too. “I had a wide run but Kylie and Brett Scott have done a tremendous job having that horse fit today. A couple of times I rode him, it’s been taking us a while to get the hang of him. He got the front today and he was going to win by three (lengths) but he pulls up when he hits the front, but I was lucky that they got to me a long way before

the post. He kicked again.” Since kicking off his prep in August, Irish Flame, a six-year-old son of Zed, has missed a placing just once from his eight starts with Scott. With Saturday’s victory, he has now earnt over $685,000 in prize money for his connections.