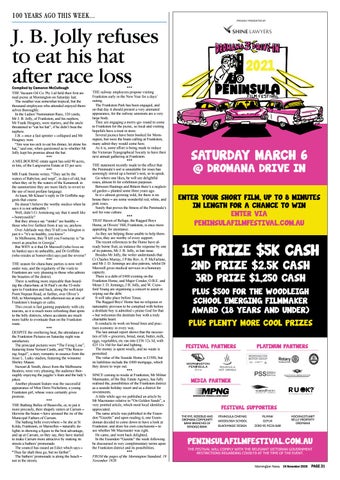 J. B. Jolly refuses to eat his hat after race loss

Compiled by Cameron McCullough THE Vacuum Oil Co. Pty Ltd held their first annual picnic at Mornington on Saturday last. The weather was somewhat tropical, but the thousand employees who attended enjoyed themselves thoroughly. In the Ladies’ Nomination Race, 120 yards, Mr J. B. Jolly, of Frankston, and his nephew, Mr Frank Heagney, were starters, and the uncle threatened to “eat his hat”, if he didn’t beat the nephew. J.B. – once a fast sprinter – collapsed and Mr Heagney won. “Jim was too sick to eat his dinner, let alone his hat,” said one, when questioned as to whether Mr Jolly kept his promise about the hat. *** A MELBOURNE estate agent has sold 90 acres, in lots, of the Langwarrin Estate at £3 per acre. *** MR Frank Stonite writes: “They sat by the waters of Babylon, and wept”, in days of old, but when they sit by the waters of the Kananook in the summertime they are more likely to revert to the use of most profane language. At least, Mr Klauer’s reply to Dr Griffiths suggests that course. He doesn’t believe the worthy medico when he says it is not unhealthy ! Well, didn’t Cr Armstrong say that it smelt like – honeysuckle? But they always say “stinks” are healthy – those who live furthest from it say so, anyhow. Over Adelaide way they’ll tell you Islington is just it – “it’s so healthy, you know”. In Melbourne, they’ll tell you Footscray is “as sweet as peaches in Georgia”. But WHY is it that Dr Maxwell (who lives on its banks) says its unhealthy, and Dr Griffiths (who resides at Somerville) says just the reverse? *** THE season for chara-banc parties is now well under way, and the regularity of the visits to Frankston are very pleasing to those who admire the beauties of the district. There is nothing more enjoyable than boarding the chara-banc at St Paul’s on the 52-mile spin to Frankston and back, along the well-kept Point Nepean Road, or further, over Oliver’s Hill, to Mornington, with afternoon tea at one of Frankston’s lounges or cafes. This circuit is fast gaining popularity with city tourists, as it is much more refreshing than spins to the hilly districts, where accidents are much more liable to eventuate than on the Frankston route. *** DESPITE the sweltering heat, the attendance at the Frankston Pictures on Saturday night was satisfactory. The principal pictures were “The Firing Line”, featuring Irene Vernon Castle, and “The Rescuing Angel”, a story romantic in essence from the Jesse L. Lasky studios, featuring the winsome Shirley Mason. Stewart & Smith, direct from the Melbourne theatres, were very pleasing, the audience thoroughly enjoying the juggler’s feats and the lady’s jokes. Another pleasant feature was the successful appearance of Miss Doris Nicholson, a young Frankston girl, whose voice certainly gives promise. *** THE Bathing Belles of Beauville, or, to put it more precisely, their shapely sisters at Carrum – likewise the beaus – have aroused the ire of the Municipal Fathers of Carrum. The bathing belle everywhere – be she at St Kilda, Frankston, or Marseilles – naturally delights in showing a figure to the best advantage, and up at Carrum, so they say, they have started to make Carrum more attractive by making its streets a bathers’ promenade. The council has issued an Edict which says – “Thus far shalt thou go, but no farther”. The bathers’ promenade is along the beach – not in the streets.

*** THE railway employees propose visiting Frankston early in the New Year for a days’ outing. The Frankston Park has been engaged, and on that day it should present a very animated appearance, for the railway unionists are a very large body. They are engaging a merry-go- round to come to Frankston for the picnic, so local and visiting hopefuls have a treat in store. Several picnics have been booked for Mornington, but were the boats calling at Frankston, many admit they would come here. As it is, some effort is being made to induce the Victorian Typographical Society to have their next annual gathering at Frankston. *** THE statement recently made to the effect that the Peninsula’s soil is unsuitable for roses has seemingly stirred up a hornet’s nest, so to speak. Go where one likes, he will see delightful roses, almost fit for exhibition purposes. Between Hastings and Bittern there’s a neglected garden – planted some three years ago. In it – almost growing wild, for there is no house there – are some wonderful red, white, and pink roses. Surely that proves the fitness of the Peninsula’s soil for rose culture. *** THAT Haven of Refuge, the Ragged Boys Home, at Olivers’ Hill, Frankston, is once more appealing for assistance. As they are helping those unable to help themselves, they are worthy of every support. The recent references to the Home have already borne fruit, as instance the response by one of its patrons, Mr J. B. Jolly, in last issue. Besides Mr Jolly, the writer understands that Cr Charles Murray, J P the Rev. A. P. McFarlane, and Mr J. D. Jennings are also patrons, whilst Dr Maxwell gives medical services in a honorary capacity. There is a debt of £400 existing on the Frankston Home, and Major Conder, O.B.E. and Messr J. D. Jennings, J B. Jolly, and W. Crawford Young are organising a concert to assist in wiping out the debt. It will take place before Xmas. The Ragged Boys’ Home has no religious or nationality provisos to be complied with before a destitute boy is admitted – praise God for that – but welcomes the destitute boy with a truly charitable heart. It conducts its work on broad lines and practises economy in every way. The last annual report shows that the necessities of life – groceries, bread, meat, butter, milk, eggs, vegetables, etc ran into £356 12s 5d, with £25 11s 10d for fuel and lighting. The money is spent wisely, and no waste is permitted. The value of the Seaside Home is £1500, but its liabilities include the £400 mortgage, which they desire to wipe out. *** SINCE coming to reside at Frankston, Mr Milner Maemaster, of the Bay Estate Agency, has fully realised the, possibilities of the Frankston district as a seaside holiday resort and as a district for investments. A little while ago we published an article by Mr Macmaster relative to “On Golden Sands”, a very pointed article, which most local identities appreciated. The same article was published in the Essendon “Gazette” and upon reading it, one Essendonian decided to come down to have a look at Frankston: and draw his own conclusions – to see whether Mr Macmaster was right. He came, and went back delighted. In the Essendon “Gazette” the week following he discoursed in very complimentary terms upon the Frankston district and its possibilities. *** FROM the pages of the Mornington Standard, 19 November 1920

ENTER YOUR SHORT FILM, UP TO 8 MINUTES IN LENGTH FOR A CHANCE TO WIN ENTER VIA PENINSULAFILMFESTIVAL.COM.AU

PENINSULAFILMFESTIVAL.COM.AU THE FESTIVAL WILL COMPLY WITH THE RELEVANT VICTORIAN GOVERNMENT RESTRICTIONS REGARDING COVID19 AT THE TIME OF THE EVENT.