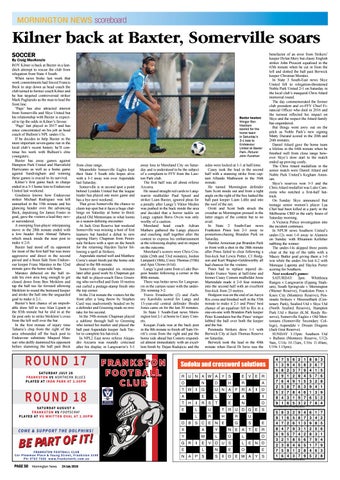 By Craig MacKenzie ROY Kilner is back at Baxter in a lastditch attempt to rescue the club from relegation from State 4 South. When news broke last week that work commitments had forced Francis Beck to step down as head coach the club turned to former coach Kilner and he has targeted controversial striker Mark Pagliarulo as the man to lead the front line. ‘Pags’ has also attracted interest from Somerville and Skye United but his relationship with Baxter is expected to tip the odds in Kilner’s favour. ‘Pags’ last played in 2017 and has since concentrated on his job as head coach of Bulleen’s NPL under-15s. If he decides to help Baxter in the most important seven-game run in the local club’s recent history he’ll continue his work with Bulleen’s elite youngsters. Baxter has away games against Hampton Park United and Harrisfield Hurricanes as well as a home game against Sandringham and winning these games is crucial to its survival. Kilner’s first game back in charge ended in a 3-1 home loss to Endeavour United last weekend. Goodness knows how Endeavour striker Michael Rodriguez was left unmarked in the 15th minute and his glancing header over the advancing Beck, deputising for James Foster in goal, gave the visitors a lead they never surrendered. A sweeping four-player interpassing move in the 28th minute ended with a low header from Ahmad Tabarra which snuck inside the near post to make it 2-0. Baxter had stood off its opponent for most of the first half but was more aggressive and direct in the second period and a brain fade from Endeavour keeper Franc Marateo in the 52nd minute gave the home side hope. Marateo dithered on the ball inside his own area long enough to get closed down from Ben Meiklem and tap the ball too far forward allowing Meiklem to round the bemused keeper and stroke the ball into the unguarded goal to make it 2-1. Baxter’s best chance of an improbable draw fell to wee Alan Lipsett in the 85th minute but he slid in at the far post only to strike Meiklem’s cross from the left well over the bar. In the first minute of injury time Tabarra’s chip from the right of the area rebounded off the back post to Endeavour substitute Maqsod Mansuri who deftly dummied his opponent before slamming the ball past Beck

from close range. Meanwhile Somerville Eagles kept their State 5 South title hopes alive with a 3-1 away win over Aspendale last Saturday. Somerville is in second spot a point behind Lyndale United but the league leader has played one more game and has a bye next weekend. That gives Somerville the chance to claim top spot but it faces a huge challenge on Saturday at home to thirdplaced Old Mentonians in what looms as a season-defining encounter. At Jack Grut Reserve last weekend Somerville was missing a host of first teamers but handed a debut to new signing Harry Chapman from Peninsula Strikers with a spot on the bench for the returning Hayden Taylor following a spell at Strikers. Aspendale started well and Matthew Corra’s smart finish put the home side ahead in the 8th minute. Somerville responded six minutes later after good work by Chapman got the ball to player-coach Dave Greening who swivelled and from 10 metres out curled a postage-stamp finish into the top corner. In the 21st minute the visitors hit the front after a long throw by Stephen Curd was inadvertently headed on by a defender and Greening made no mistake for his second. In the 59th minute Chapman played a sublime through ball to Greening who turned his marker and placed the ball past Aspendale keeper Jack Taylor to complete his hat-trick . In NPL2 East news referee Alejandro Azcurra was roundly criticised after his display in Langwarrin’s 5-1

away loss to Moreland City on Saturday and is understood to be the subject of a complaint to FFV from the Lawton Park club. The first half was all about referee Azcurra. He issued straight red cards to Langwarrin midfielder Paul Speed and striker Liam Baxter, ignored pleas for a penalty after Langy’s Viktor Medini was pushed in the back inside the area and decided that a horror tackle on Langy captain Boris Ovcin was only worthy of a caution. Moreland head coach Adrian Mathers gathered the Langy players and coaching staff together after the contest to express his embarrassment at the refereeing display and its impact on the outcome. Moreland’s scorers were Chris Cristaldo (26th and 53rd minutes), Jordon Lampard (18th), Corey Thomas (55th) and Apai Ukono (61st). Langy’s goal came from a Luke Burgess header following a corner in the 80th minute. There was better news for Langwarrin in the curtain raiser with the under20s winning 3-2. Travis Ernsdoerfer (2) and Zachory Karolidis scored for Langy and 15-year-old central defender Brodie Jones came on for the last 30 minutes. In State 1 South-East news Mornington lost 2-1 at home to Casey Comets. Keegan Ziada was at the back post in the 8th minute to finish off Sam Orritt’s cross from the right and put the home side ahead but Comets responded almost immediately with an excellent finish by Dejan Radojicic and the

sides were locked at 1-1 at half-time. Casey took the lead in the second half with a stunning strike from captain Allando Mathieson in the 56th minute. He turned Mornington defender Sam Scott inside out and from a tight angle on the right of the box lashed the ball past keeper Liam Little and into the roof of the net. Orritt and Scott both struck the crossbar as Mornington pressed in the latter stages of the contest but to no avail. In State 2 South-East news Frankston Pines lost 2-1 away to promotion-chasing Brandon Park on Saturday. Hamlet Armenian put Brandon Park in front with a shot in the 38th minute after Pines failed to clear following a free-kick but Lewis Potter, CJ Hodgson and Kurt Wagner-Goldsworthy all had chances for the visitors. Pines had to replace injured defender Franco Vanni at half-time and former Casey Comets midfielder Jesse Martindale made it 2-0 four minutes into the second half with an excellent free-kick from 25 metres. Hodgson was on the end of an Aaryn Rix cross and finished well in the 55th minute to make it 2-1 and Pines’ best chance of an equaliser fell to Rix in a one-on-one with Brandon Park keeper Peter Koundanis but the Pines’ winger lobbed the ball over both the keeper and the bar. Peninsula Strikers drew 1-1 with Berwick City at Jack Thomas Reserve on Saturday. Berwick took the lead in the 40th minute when David Di Iorio was the