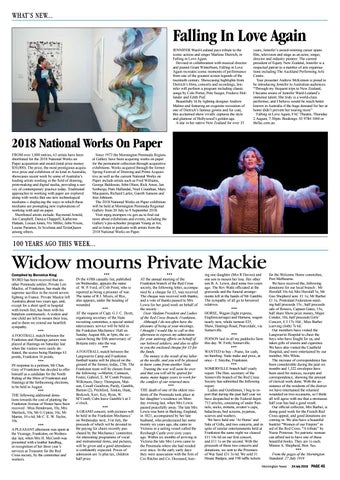 Falling In Love Again JENNIFER Ward-Lealand pays tribute to the iconic actress and singer Marlene Dietrich, in Falling in Love Again. Devised in collaboration with musical director and pianist Grant Winterburn, Falling in Love Again recreates iconic moments of performance from one of the greatest screen legends of the twentieth century. Showcasing highlights from Dietrich’s films, concerts and recordings, Jennifer will perform a program including classic songs by Cole Porter, Pete Seeger, Frederic Hollander and Edith Piaf. Beautifully lit by lighting designer Andrew Malmo and featuring an exquisite recreation of one of Dietrich’s famous gowns and fur coat, this acclaimed show vividly captures the style and glamour of Hollywood’s golden age. A star in her native New Zealand for over 35

years, Jennifer’s award-winning career spans film, television and stage as an actor, singer, director and industry pioneer. The current president of Equity New Zealand, Jennifer is a respected patron to a number of arts organisations including The Auckland Performing Arts Centre. Tour presenter Andrew McKinnon is proud to be introducing Jennifer to Australian audiences. “Through my frequent trips to New Zealand, I became aware of Jennifer Ward-Lealand’s immense talent. She truly is a world-class performer, and I believe would be much better known in Australia if the huge demand for her at home didn’t prevent her touring more” Falling in Love Again, FAC Theatre, Thursday 2 August, 7.30pm. Bookings: 03 9784 1060 or thefac.com.au

2018 National Works On Paper FROM over 1,000 entries, 63 artists have been shortlisted for the 2018 National Works on Paper acquisition and award (total prize money $50,000). The prize, the most prestigious acquisitive prize and exhibition of its kind in Australia, showcases recent work by some of Australia’s leading artists working in the field of drawing, print-making and digital media, providing a survey of contemporary practice today. Traditional approaches to working with paper are explored along with works that use new technological mediums – displaying the ways in which these mediums are prompting new explorations of working with and on paper. Shortlisted artists include: Raymond Arnold, Jon Campbell, Danica Chappell, Katherine Hattam, Locust Jones, Viv Miller, John Nixon, Louise Paramor, Jo Scicluna and TextaQueen among others.

Since 1973 the Mornington Peninsula Regional Gallery have been acquiring works on paper for the permanent collection through acquisitive exhibitions. Works acquired through the former Spring Festival of Drawing and Prints Acquisitive as well as the current National Works on Paper include artists such as Fred Williams, George Baldessin, John Olsen, Rick Amor, Jan Senbergs, Pam Hallandal, Noel Counihan, Mary Macqueen, Richard Larter, Gareth Sansom and Jess Johnson. The 2018 National Works on Paper exhibition will be held at Mornington Peninsula Regional Gallery from 20 July to 9 September 2018. Visit mprg.mornpen.vic.gov.au to find out more about exhibitions and events, including the Gallery’s pre-schooler program Young at Art, and to listen to podcasts with artists from the 2018 National Works on Paper.

Compiled by Boronica King WORD has been received that another Peninsula soldier, Private Len Mackie, of Frankston, has made the supreme sacrifice in the recent severe fighting in France. Private Mackie left Australia about two years ago, and, except for a short spell in hospital with trench feet, has been with his battalion continuously. A widow and one child are left to mourn their loss, and to them we extend our heartfelt sympathy. *** A FOOTBALL match between the Frankston and Hastings juniors was played at Hastings on Saturday last when the visitors were easily defeated, the scores being Hastings 63 points, Frankston 16 points. *** IN response to a petition, Mr Chas. Grey of Frankston has decided to offer himself as a candidate for the North Riding of the Shire of Frankston and Hastings at the forthcoming elections, to be held in August. *** THE following additional donations towards the cost of planting the Frankston Avenue of Honor have been received : Miss Henderson, 10s; Mrs Sherlock, 10s; Mr G Upton, 10s; Mr Martin, 10 s 6d; Mr C. E. W. Taylor, 10s. *** A PLEASANT afternoon was spent at the Vicarage, Frankston, on Wednesday last, when Mrs H. McComb was presented with a leather handbag, in recognition of her three year’s services as Treasurer for the Red Cross society, by the committee and workers.

*** IN the 418th casualty list, published on Wednesday, appears the name of. W. P. Ford, of Crib Point, who is reported as being a prisoner of war. The name of R J. Myers, of Rye, also appears, under the heading of wounded. *** AT the request of Capt. G J. C. Dyett, organising secretary of the State recruiting committee, a special united intercessory service will be held in the Frankston Mechanics’ Hall on Sunday August 4th, at 5pm, the occasion being the filth anniversary of Britains entry into the war. *** A FOOTBALL match between the Langwarrin Camp and Frankston football teams will be played on the ground of the former, today, 27th. The Frankston team will be chosen from the following :—Martin, Cunneen, Foster, Gabriel, E. M’Comb Prosser, Wilkinson, Darcy Thompson, Matson, Coxall Goodwin, Purdy, Gamble, Burton (2), Pitchford, Tonkin, Hunt, Bedcock, Kerr, Key, Ryan, W. M’Comb, Cabs leave Gamble’s at 2 o’clock. *** A GRAND concert, with pictures will be held in the Frankston Mechanics’ on Wednesday next, 31st July, the proceeds of which wil be devoted to the paying for chairs recently purchased by the Mechanics’ committee. An interesting programme of vocal and instrumental items, and pictures, will be given and a good attendance is confidently expected. Prices of admission are 1s plus tax, children half price.

*** AT the annual meeting of the Frankston branch of the Red Cross society, the following letter, accompanied by a cheque for £5, was received The cheque was received with thanks, and a vote of thanks passed to Mrs Lewis for her good work on behalf of the society : Dear Madam President and Ladies of the Red Cress Branch, Frankston, Although I do not.often have the pleasure of being at your meetings, I thought I would like to call in this afternoon to express my admiration for your untiring efforts on behalf of our beloved soldiers, and also to offer to you the enclosed cheque for £5 for the funds. The money is the result of my labor at the needle, and you will be pleased to know came from another State. Trusting the war will soon be over and that you will all be spared for many, many happy years to work for the comfort of our returned men. *** THE death of one of the oldest residents of the Peninsula took place at her daughter’s residence on Monday evening last, when Mrs Lewis passed peacefully away. The late Mrs Lewis was born in Barking, England, in 1821, accompanied by her late husband, who predeceased her some twenty six years ago, she came to Victoria in a sailing vessel called the Roxburgh Castle over sixty years ago. Within six months of arriving in Victoria the late Mrs Lewis came to the Peninsula where she had resided ever since. In the early early days they were association with the firm of Cro Ritchie and Co. Deceased, leav-

ing one daughter (Mrs R Davies) and one son to mourn her loss. Her other son B. A. Lewis, died some two years ago. The Rev Watts officiated at the graveside and the funeral arrangements left in the hands of Mr Gamble. The sympathy of all go to bereaved relatives. *** HORSE, Wagon (light express, Engforecarriage) and Harness, wagon nearly new, whole turnout £25, Shaw, Hastings Road, Pearcedale, via Somerville. *** POISON laid in all my paddocks farm this day. W. Firth; Somerville. *** WANTED to buy - Piano, for cash, no humbug. State make and price, at once - J. Smythe, Frankston. *** SOMERVILLE branch half yearly report. The Hon. secretary of the Somerville branch of the Red Cross Society has submitted the following report. Ladies and Gentlemen, I beg to report that during the past half year we have despatched to the Federal depot 715 articles, consisting of under flannels, socks, mittens, aviator’s caps, balaclavas, bed screens, pyjamas, scarves and washers. We have held one ‘At Home’ and Sale of Gifts, and two concerts, and in spite of similar entertainments held at Frankston the same night we cleared £11 14s 6d on our first concert, and £11 1s on the second. With the proceeds of these two concerts and donations, we sent to the Prisoners of War fund £31 5s 6d. We sold 31 House Badges, and 198 raffle tickets

for the Welcome Home committee, Port Melbourne. We have received the, following donations for our local branch : Mr Horsfall 10s 6d, Mrs Horsfall 5s, Mr Geo Shepherd senr. £1 1s; Mr Barber £1 1s; Protestant Federation meeting half proceeds 15s ; half proceeds sale of flowers, Captain Gates, 15s; half share Show prize money, Major Conder, 10s; half proceeds Girls’ Concert, £.3 17s 10d ; Miss Barber (carving cloth) 7s 6d. Our members have visited the Langwarrin Hospital to cheer the boys who have fought for us, and taken gifts of sweets and cigarettes. We have also visited the Caulfield Hospital, and were entertained by our member, Mrs White. The increase of correspondence has been considerable during the past six months and 1,322 envelopes have been used for notices, receipts and correspondence, showing the amount of clerical work done. With the assistance of the residents of the district we have entertained the returned wounded on two occasions, so I think all will agree with me that a strenuous half year has had a good result. Our official collector, Mrs Barber, is doing good work for the French Red Cross appeal, and good donations are coming in. We also have a beautiful booklet “Women of our Empire” in aid of the Red Cross. “A tribute” by Nurse Primrose. No patriotic woman can afford not to have one of these beautiful books. They are 1s each. Minnie A. Shepherd, Hon. Sec. *** From the pages of the Mornington Standard, 27 July 1918