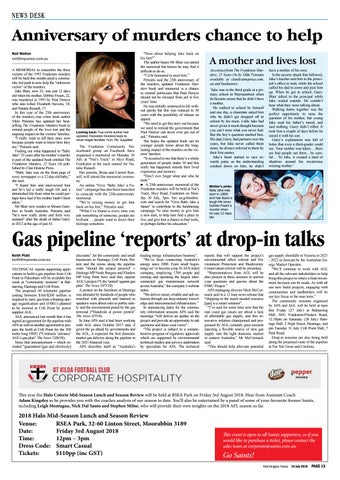 Anniversary of murders chance to help

The Frankston Community Noticeboard group on Facebook have organised a memorial on Monday 30 July at “Nat’s Track” in Skye Road, Frankston at the track named for Natalie Russell. Her parents, Brian and Carmel Russell, will attend the memorial ceremony.  An online “Give ‘Baby Jake’ a Future” campaign has also been launched to coincide with the 25th-anniversary memorial. “We’re raising money to get him back on his feet,” Petraitis said. “What I’ve found is every time you ask something of someone, people are brilliant … people want to direct their feelings somehow.

“How about helping Jake back on his feet?” The author hopes Mr Blair can attend the memorial but knows he may find it difficult to do so. “I’d be honoured to meet him.” Petraitis said the 25th anniversary of the murders, updated Frankston Murders book and memorial is a chance to remind politicians that Paul Denyer should not be released from jail in five years’ time. He was initially sentenced to life without parole but this was reduced to 30 years with the possibility of release on appeal. “We need to get this story out because we need to remind the government that Paul Denyer can never ever get out of jail,” Petraitis said. She hopes the updated book can let younger people know about the longlasting impact of the murders on the victims’ families. “It occurred to me that there’s a whole generation of people under 30 and this really has happened outside their lived experience and memory. “Don’t ever forget what and who he took.” n A 25th anniversary memorial of the Frankston murders will be held at Nat’s Track, Skye Road, Frankston on Monday 30 July, 3pm. See au.gofundme. com and search for “Give Baby Jake a future” to contribute to the fundraising campaign “to raise money to give him a new start, to help him find a place to live, and give him a chance to find work, or perhaps further his education.”

discounts” for the community and small businesses in Hastings, Crib Point, Bittern and the towns along the pipeline route “should the project proceed” – Hastings MP Neale Burgess and Flinders MP Greg Hunt have said they oppose AGL’s project (“Libs ‘united’ against gas plan” The News 10/7/18). A protest on the foreshore at Hastings was attended by hundreds of people who marched with placards and listened to speakers warn about risks to public safety and the environment posed by the gas terminal (“Hundreds at power protest” The News 3/7/18). In June APA said it had been working with AGL since October 2017 and, if given the go ahead by governments and the AGL, it expected the first domestic market gas delivery along the pipeline in the 2021 financial year. APA describes itself as “Australia’s

leading energy infrastructure business”. “We’ve been connecting Australia’s energy since 2000. From small beginnings we’ve become a top 50 ASX-listed company, employing 1700 people and owning and operating the largest interconnected gas transmission network across Australia,” the company’s website states. “We deliver smart, reliable and safe solutions through our deep industry knowledge and interconnected infrastructure.” In announcing dates for the community information sessions APA said the meetings “will deliver an update on the project and provide an opportunity to ask questions and share your views”. “The project is subject to a comprehensive program of regulatory approvals which are supported by environmental technical studies and surveys undertaken by specialists for APA. The technical

Neil Walker neil@mpnews.com.au A MEMORIAL to remember the three victims of the 1993 Frankston murders will be held this month amid a community-led push to now help the “unknown victim” of the murders. Jake Blair, now 25, was just 12 days old when his mother, Debbie Fream, 22, was murdered in 1993 by Paul Denyer who also killed Elizabeth Stevens, 18, and Natalie Russell, 17. In this year of the 25th anniversary of the murders, true crime book author Vikki Petraitis has updated her bestselling The Frankston Murders book to remind people of the lives lost and the ongoing impact on the victims’ families. “I really want to tell their story now because people want to know how they are,” Petraitis said. Finding out what happened to “baby Jake” 25 years after his mother’s murder is part of the updated book entitled The Frankston Murders, 25 Years On published by Clan Destine Press. “Baby Jake was on the front page of every newspaper — a 12-day-old baby,” she said. “I found him and interviewed him and he’s led a really tough life and a diminished life from what he could perhaps have had if his mother hadn’t been taken.” Mr Blair now resides in Mount Gambier in South Australia. Petraitis said “he’s now really alone and feels very isolated” after the death of father Garry in 2012 at the age of just 43.

A mother and lives lost An extract from The Frankston Murders, 25 Years On by Vikki Petraitis available at clandestinepress.com. au and bookstores: ‘Jake was in the third grade at a primary school in Warrnambool when he became aware that he didn’t have a mother. He walked to school by himself and one day, a classmate asked him why he didn’t get dropped off to school by his mum. Little Jake had never given it much thought because you can’t miss what you never had. But the boy’s question startled him. His dad, Garry, had partners over the years, but Jake never called them mum; he always referred to them by their first names. Jake’s heart started to race towards panic as the understanding crashed down on him; he didn’t

have a mother of his own. In the anxiety attack that followed, Jake’s teacher sent him to the principal’s office to wait, while the school called his dad to come and pick him up. When he got to school, Garry Blair talked to the principal while Jake waited outside. He couldn’t hear what they were talking about. Walking home together was the perfect opportunity to raise the question of his mother, but young Jake read his father’s mood, and said nothing. Garry didn’t either. It took him a couple of days before he raised it with his son. Garry’s explanation was full of holes that even a third-grader could see. Your mother was taken… there are bad people out there…be careful… To Jake, it created a land of shadows around his mysterious missing mother.’

Mother’s pride: Baby Jake was born in 1993 and has faced a tough life since Debbie Fream’s murder when he was 12 days old.

Keith Platt keith@mpnews.com.au TECHNICAL reports supporting applications to build a gas pipeline from Crib Point to Pakenham will be available this week at “community sessions” at Balnarring, Hastings and Crib Point. The proposed 60 kilometre pipeline costing between $160-$200 million is required to carry gas from a floating storage regasification unit (FSRU) planned to be moored at Crib Point by power supplier AGL. AGL announced last month that it has signed an agreement for the pipeline with APA as well as another agreement to prepare the berth at Crib Point for the 300 metre long FRSU (“Contracts ‘advance’ AGL’s gas plan” The News 12/6/18). Since that announcement – which included “guaranteed [gas and electricity]

reports that will support the project’s environmental effect referral and Environment Protection and Biodiversity Conservation referral will be presented. “Representatives from AGL will be also present at these sessions to answer your questions and queries about the FSRU Project.” APA managing director Mick McCormack said in a 12 June news release that “shipping-in the much needed resource [gas] is a smart solution”. “I’ve said for some time now that the east coast gas issues are about a lack of affordable gas supply, and this innovative solution championed and progressed by AGL certainly goes towards injecting a flexible source of new gas supply into the tight domestic market in eastern Australia,” Mr McCormack said. “This should help alleviate potential

gas supply shortfalls in Victoria in 2021 - 2022 as forecast by the Australian Energy Market Operator. “We’ll continue to work with AGL and all the relevant stakeholders to help bring this project to where a final investment decision can be made. As with all our new build projects, engaging with communities and landholders will be our key focus in the near term.” The community sessions organised by APA and AGL will he held at 6pm this Friday (27 July) at Balnarring Hall, 3041 Frankston-Flinders Road; 12.30pm on Saturday (28 July) Hastings Hall, 3 High Street, Hastings; and pm Tuesday 31 July Crib Point Hall, 7 Park Road. Drop-in sessions are also being held along the proposed route of the pipeline at Nar Nar Goon and Cardinia.

This year the Halo Coterie Mid-Season Lunch and Season Review will be held at RSEA Park on Friday 3rd August 2018. Hear from Assistant Coach Adam Kingsley as he provides you with the coaches analysis of our season to date. You’ll also be entertained by a panel of some of your favourite former Saints, including Leigh Montagna, Nick Dal Santo and Stephen Milne, who will provide their own insights on the 2018 AFL season so far.

This event is open to all Saints supporters, so if you would like to purchase a ticket, please contact the sales team at corporate@saints.com.au