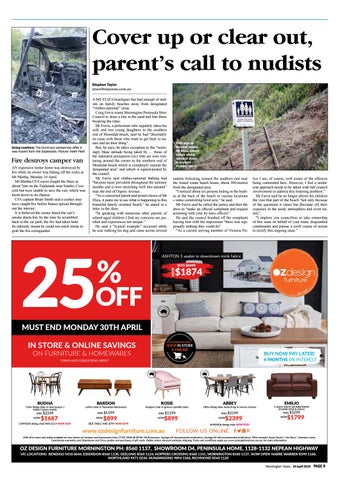 Cover up or clear out, parent’s call to nudists Stephen Taylor steve@mpnews.com.au

Fire destroys camper van AN expensive motor home was destroyed by fire while its owner was fishing off the rocks at Mt Martha, Monday 16 April. Mt Martha CFA crews fought the blaze at about 7pm on the Esplanade near Stanley Crescent but were unable to save the van, which was burnt down to its chassis. CFA captain Brian Smith said a cooker may have caught fire before flames spread throughout the interior. It is believed the owner heard the van’s smoke alarm but, by the time he scrambled back to the car park, the fire had taken hold. Its intensity meant he could not reach inside to grab the fire extinguisher.

nudists frolicking toward the southern end near the Ansett estate beach house, about 300-metres from the designated area. “I noticed about six persons hiding in the bushes at the back of the beach in various locations – some committing lewd acts,” he said. Mr Ferris said he called the police and then the shire to “make an official complaint and request actioning with your by-laws officers”. He said the council brushed off the complaint leaving him with the impression “there was supposedly nothing they could do”. “As a current serving member of Victoria Po-

lice I am, of course, well aware of the offences being committed here. However, I feel a unilateral approach needs to be taken with full council involvement to address this festering problem.” Mr Ferris said he no longer allows his children the visit that part of the beach “not only because of the questions it raises but [because of] their exposure to the seedy atmosphere and overt nudity”. “I implore you councillors to take ownership of this issue on behalf of your many disgruntled constituents and pursue a swift course of action to rectify this ongoing issue.”

Going nowhere: The burnt-out campervan after it was moved from the Esplanade. Picture: Keith Platt

A MT ELIZA beachgoer has had enough of nudists on family beaches away from designated “clothes-optional” areas. Craig Ferris wants Mornington Peninsula Shire Council to draw a line in the sand and fine those breaking the rules. Mr Ferris, a policeman who regularly takes his wife and two young daughters to the southern end of Moondah beach, said he had “absolutely no issue with those who want to get back to nature and do their thing”. But, he says, he takes exception to the “seemingly blase attitude being taken by … those of the naturalist persuasion (sic) who are now venturing around the corner to the southern end of Moondah beach which is completely outside the designated area” and which is signed-posted by the council. Mr Ferris said clothes-optional bathing had “become more prevalent throughout the summer months and is now stretching well into autumn” near the end of Osprey Avenue. “As a concerned parent and proud citizen of Mt Eliza, it pains me to see what is happening to this beautiful family oriented beach,” he stated in a letter to the shire. “In speaking with numerous other parents of school-aged children I find my concerns are justified and experiences not unique.” He said a “typical example” occurred while he was walking his dog and came across several