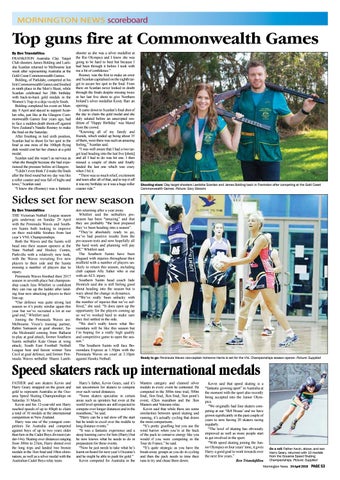 Top guns fire at Commonwealth Games By Ben Triandafillou FRANKSTON Australia Clay Target Club shooters James Bolding and Laetisha Scanlan returned to Melbourne last week after representing Australia at the Gold Coast Commonwealth Games. Bolding, of Parkdale, competed at his first Commonwealth Games and finished in ninth place in the Men’s Skeet, while Scanlan celebrated her 28th birthday with back-to-back gold medals in the Women’s Trap in a deja vu-style finish. Bolding completed his event on Monday 9 April and stayed to support Scanlan who, just like at the Glasgow Commonwealth Games four years ago, had to face a sudden-death shoot-off against New Zealand’s Natalie Rooney to make the final on the Saturday. After finishing in tied sixth position, Scanlan had to shoot for her spot in the final as one miss of the 100kph flying disk would cost her her chance at a gold medal. Scanlan said she wasn’t as nervous as what she thought because she had experienced the pressure before at Glasgow. “I didn’t even think I’d make the finals after the third round but my day was like a roller coaster and was full of highs and lows,” Scanlan said. “I knew she (Rooney) was a fantastic

shooter as she was a silver medallist at the Rio Olympics and I knew she was going to be hard to beat but because I had been through it before I took with me a bit of confidence.” Rooney was the first to make an error and Scanlan capitalised on the eighth target to secure her spot in the final. From there on Scanlan never looked in doubt through the finals despite missing twice in her last five shots to give Northern Ireland’s silver medallist Kirsty Barr an opening. It came down to Scanlan’s final shot of the day to claim the gold medal and she duly saluted before an unscripted rendition of ‘Happy Birthday’ was blared from the crowd. “Knowing all of my family and friends, which ended up being about 35 of them, were there was such an amazing feeling,” Scanlan said. “I was well aware that I had a two target lead heading into the last five [shots] and all I had to do was hit one. I then missed a couple of shots and finally landed the last one which was crazy when I hit it. “There was so much relief, excitement and tears after all of that, and to top it off it was my birthday so it was a huge roller coaster ride.”

Sides set for new season By Ben Triandafillou THE Victorian Netball League season gets underway on Sunday 29 April with the Peninsula Waves and Southern Saints both looking to improve on their mid-table finishes from last year’s VNL Championships. Both the Waves and the Saints will head into their season openers at the State Netball and Hockey Centre, Parkville with a relatively new look, with the Waves recruiting five new players to their side and the Saints missing a number of players due to injury. Peninsula Waves finished their 2017 season in seventh place but championship coach Jess Whitfort is confident they can rise up the ladder after landing four new attacking players to their line-up. “Our defence was quite strong last season so it’s pretty similar again this year but we’ve recruited a lot at our goal end,” Whitfort said. Joining the Peninsula Waves are: Melbourne Vixen’s training partner, Rahni Samason at goal shooter; Sacha Mcdonald coming from Ballarat to play at goal attack; former Southern Saints netballer Kate Oman at wing attack; South East Football Netball League best and fairest winner Tara Cecil at goal defence; and former Peninsula Waves netballer Sharni Lamb-

den returning after a year away. Whitfort said the netballers preseason has been “amazing” and that they are probably “the best prepared they’ve been heading into a season”. “They’re absolutely ready to go, we’ve had positive results from the pre-season tests and now hopefully all the hard work and planning will pay off,” Whitfort said. The Southern Saints have been plagued with injuries throughout their midfield with a number of players unlikely to return this season, including club captain Ally Salter who is out with an ACL injury. Southern Saints head coach Jade Heinrich said she is still feeling good about heading into the season but is wary about the change in dynamics. “We’ve really been unlucky with the number of injuries that we’ve suffered,” she said. “It does open up the opportunity for the players coming up so we’ve worked hard to make sure they feel settled in the side. “We don’t really know what Boroondara will be like this season but I’m hoping for a really high quality and competitive game to open the season.” The Southern Saints will face Boroondara Express at 1.50pm with the Peninsula Waves on court at 3.10pm against Hawks Netball.

FATHER and son skaters Kevin and Harry Geary strapped on the green and gold to represent Australia at the Oceania Speed Skating Championships on Saturday 31 March. Kevin and his 12-year-old son Harry reached speeds of up to 40kph to claim a total of 10 medals at the international competition in New Zealand. Harry was one of the youngest competitors for Australia and competed against boys of up to two years older than him in the Cadet Boys division (under-14s). Skating over distances ranging from 300m to 21km, Harry shined over the long trips and landed two bronze medals in the 1km final and 10km elimination, as well as a silver medal with the Australian Cadet Boys relay team.

Harry’s father, Kevin Geary, said it’s not uncommon for skaters to compete over such varied distances. “Some skaters specialise in certain areas such as sprinters but even at the world level sprinters are still expected to compete over longer distances and in the marathons,” he said. “Harry can be a tad slow off the start but he tends to excel over the middle to long distance events.” “It was a fantastic experience and a steep learning curve for him (Harry) but he now knows what he needs to do in preparation for these events. “Now he just needs to take what he’s learnt on board for next year’s Oceania’s and he might be able to push for gold.” Kevin competed for Australia in the

Masters category and claimed silver medals in every event he contested. He competed in the 300m time trial, 500m final, 1km final, 3km final, 5km point’s event, 42km marathon and the 3km Masters and Veterans relay. Kevin said that while there are some similarities between speed skating and running, it’s actually cycling that draws the most comparisons. “It’s pretty gruelling but you use the wind barrier when you’re at the back of the pack to conserve energy like you would if you were competing in the Tour de France,” he said. “It’s quite strategic as you have the break-away groups as you do in cycling and then the pack needs to time their runs to try and chase them down.

Speed skaters rack up international medals Kevin said that speed skating is a “fantastic growing sport” in Australia at the moment with the sport also recently being accepted into the Junior Olympics. “We originally had four skaters competing at our ‘Sk8 House’ and we have grown significantly in the past couple of years to now having 20 skaters racing regularly. “The level of skating has obviously improved as well as more people start to get involved in the sport. “With speed skating joining the Junior Olympics in four years’ time, it gives Harry a good goal to work towards over the next few years.” Ben Triandafillou

On a roll: Father Kevin, above, and son Harry Geary, returned with 10 medals from the Oceania Speed Skating Championships. Picture: Supplied