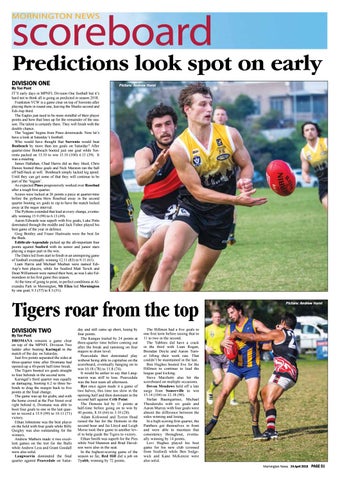 By Toe Punt IT’S early days in MPNFL Division One football but it’s hard not to think all is going as predicted in season 2018. Frankston YCW is a game clear on top of Sorrento after playing them in round one, leaving the Sharks second and Edi-Asp third. The Eagles just need to be more mindful of their player points and how that lines up for the remainder of the season. The talent is certainly there. They will finish with the double chance. The ‘logjam’ begins from Pines downwards. Now let’s have a look at Saturday’s football. Who would have thought that Sorrento would beat Bonbeach by more than ten goals on Saturday? After quarter-time Bonbeach booted just one goal while Sorrento packed on 13.10 to win 15.10 (100) 4.15 (39). It was a mauling James Hallahan, Chad Harris did as they liked, Chris Dawes booted three goals and Nick Marston ran the ball off half-back at will. Bonbeach simply lacked leg speed. Until they can get some of that they will continue to be part of the ‘logjam’. As expected Pines progressively worked over Rosebud after a tough first quarter. Scores were locked at 26 points a piece at quarter-time before the pythons blew Rosebud away in the second quarter booting six goals to zip to have the match locked away at the major interval. The Pythons extended that lead at every change, eventually winning 15.9 (99) to 6.13 (49). Aaron Edwards was superb with five goals, Luke Potts dominated through the middle and Jack Fisher played his best game of the year in defence. Greg Bentley and Fraser Hustwaite were the best for the Buds. Edithvale-Aspendale picked up the all-important four points against Seaford with its senior and junior stars playing a major part in the win. The Dales led from start to finish in an uninspiring game of football eventually winning 12.11 (83) to 9.11 (65). Liam Harris and Michael Meehan were named EdiAsp’s best players, while for Seaford Matt Terich and Dean Williamson were named their best, as was Luke Edmondson in his first game this season. At the time of going to print, in perfect conditions at Alexandra Park in Mornington, Mt Eliza led Mornington by one goal, 9.3 (57) to 8.3 (51).

By Toe Punt DROMANA remains a game clear on top of the MPNFL Division Two ladder after beating Karingal in the match of the day on Saturday. Just five points separated the sides at three-quarter time after Dromana had opened-up a 40-point half-time break. The Tigers booted six goals straight to four behinds in the second term. Karingal’s third quarter was equally as damaging, booting 6.2 to three behinds to drag the margin back to five points at the final change. The game was up for grabs, and with the home crowd at the Pier Street oval right behind it, Dromana was able to boot four goals to one in the last quarter to record a 15.9 (99) to 10.11 (71) victory. Ethan Johnstone was the best player on the field with four goals while Billy Quigley was also outstanding for the winners. Andrew Mathers made it two excellent games on the trot for the Bulls while Andrew Less and Grant Goodall were also solid. Langwarrin dominated the final quarter against Pearcedale on Satur-

day and still came up short, losing by four points. The Kangas trailed by 24 points at three-quarter time before coming out after the break and ramming on four majors to draw level. Pearcedale then dominated play without being able to capitalise on the scoreboard, eventually hanging on to win 10.18 (78) to 11.8 (74). It would be unfair to say that Langwarrin was stiff to lose. Pearcedale was the best team all afternoon. Rye once again made it a game of two halves, this time too slow in the opening half and then dominant in the second half against Crib Point. The Demons led by 11 points at half-time before going on to win by 40 points, 8.16 (64) to 3.10 (28). Adam Kirkwood and Tyrren Head raised the bar for the Demons in the second hour and Jai Lloyd and Leigh Morse took their game to another level to help guide the Tigers to victory. Ethan Smith was superb for the Pies while Ned Shannon and Brad Davidson were also in the seat. In the highest-scoring game of the season so far, Red Hill did a job on Tyabb, winning by 72 points.

The Hillmen had a five goals to one first term before raising that to 11 to two in the second. The Yabbies did have a crack in the third with Liam Rogan, Brendan Doyle and Aaron Turner lifting their work rate. That couldn’t be maintained in the last. Ben Hughes booted five for the Hillmen to continue to lead the league goal kicking. Steve Marchetti also hit the scoreboard on multiple occasions. Devon Meadows held off a late surge from Somerville to win 15.14 (104) to 12.18 (90). Stefan Baumgartner, Michael Theodoridis with six goals and Aaron Murray with four goals were almost the difference between the sides winning and losing. In a high scoring first quarter, the Panthers got themselves in front and were able to maintain that consistency throughout, eventually winning by 14 points. Levi Hughes played his best game for his new club (crossed from Seaford) while Ben Sedgewick and Kane McKenzie were also solid. Mornington News 24 April 2018