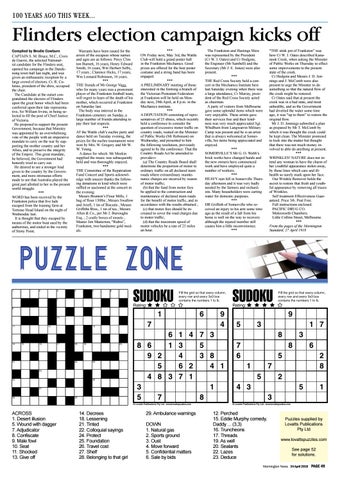 Flinders election campaign kicks off Compiled by Brodie Cowburn CAPTAIN S. M. Bruce, M.C., Croix de Guerre, the selected Nationalist candidate for the Flinders seat, opened his campaign in the Dandenong town hall last night, and was given an enthusiastic reception by a large crowd of electors. Cr. R. Colenso, president of the shire, occupied the chair. The Candidate at the outset congratulated the electors of Flinders upon the great honor which had been conferred upon their late representative, Sir William Irvine, in being selected to fill the post of Chief Justice of Victoria. He proposed to support the present Government, because that Ministry was appointed by an overwhelming vote of the people with an imperative mandate to carry on the war by supporting the mother country and her Allies, and to preserve the integrity of the Empire. This great mandate, he believed, the Government had honestly tried to carry out. He desired to see a stronger lead given to the country by the Government, and more strenuous efforts made to see that Australia played the great part allotted to her in the present world struggle. *** WORD has been received by the Frankston police that five lads escaped from the training farm at Tortoise Head Island on the night of Wednesday last. It is thought that they escaped by means of the motor boat used by the authorities, and ended in the vicinity of Stony Point.

Warrants have been issued for the arrest of the escapees whose names and ages are as follows: Percy Clinton Burnett, 16 years; Henry Edward Smith, 16 years, Wm Herbert Selby, 17 years ; Clarence Hicks, 17 years; Wm Leonard Robinson, 16 years. *** THE friends of Mr George Vagg, who for many years was a prominent player of the Frankston football team, will regret to learn of the death of his mother, which occurred at Frankston on Saturday last. The body was interred in the Frankston cemetery on Sunday, a large number of friends attending to pay their last respects. *** AT the Wattle club’s euchre party and dance held on Tuesday evening, the prizes for the euchre tournament were won by Mrs. W. Gregory and Mr W. W. Young. A dance for which. Mr Meekin supplied the music was subsequently held and was thoroughly enjoyed. *** THE Committee of the Repatriation Fund Concert and Sports acknowledge with sincere thanks the following donations in kind which were raffled or auctioned at the concert in the evening: Messrs Brunton’s Flour Mills, 1 bag of flour 150lbs ; Messrs Swallow and Ariell, 1 tin of Biscuits ; Messrs Griffiths Bros., 1 tin of tea ; Messrs Allen &amp; Co., per Mr J. Burroughs Esq. ; 2 costly boxes of sweets ; Master Jim Masterton, “Rubra”, Frankston, two handsome gold medals.

*** ON Friday next, May 3rd, the Wattle Club will hold a grand poster ball in the Frankston Mechanics. Good prizes are offered for the best poster costume and a string band has been engaged. *** A PRELIMINARY meeting of those interested in the forming a branch of the Victorian Protestant Federation at Frankston will be held on Monday next, 29th April, at 8 p.m. in the Mechanics institute. *** A DEPUTATION consisting of representatives of 25 shires, which recently held a conference to consider the question of excessive motor traffic on country roads, waited on the Minister of Public Works (Mr Robinson) on Wednesday, and presented to him the following resolution, previously agreed to by the conference: That the Country Roads Act be amended to provide— (a) The Country Roads Board shall determine the proportion of motor to ordinary traffic on all declared main roads where extraordinary maintenance charges are incurred by reason of motor traffic; (b) that the fund from motor fees be applied to the construction and maintenance of declared main roads for the benefit of motor traffic, and in accordance with the results obtained ; (c) that motor fees should be increased to cover the road charges due to motor traffic; (d) that the maximum speed of motor vehicles be a rate of 25 miles an hour.

The Frankston and Hastings Shire was represented by the President (Cr W. J. Oates) and Cr Hodgins; the Engineer (Mr Sambell) and the Secretary (Mr J. E. Jones) were also present. *** THE Red Cross Society held a concert in the Mechanics Institute here last Saturday evening when there was a large attendance, Cr Murray, president of the Red Cross Society acted as chairman. A party of visitors from Melbourne gave some splendid items which were very enjoyable. These artists gave their services free and their kindness was very much appreciated Sgt. Whidburn from Langwarrin Military Camp was present and he is an artist that is always welcomed at Somerville, his items being appreciated and enjoyed. *** SOMERVILLE’S Mr G. O. Webb’s brick works have changed hands and the new owners have commenced work and have employed quite a number of workers. *** HEAVY rain fell in Somerville Thursday afternoon and it was very badly needed by the farmers and orchardists. Many householders were carting water for domestic purposes. *** DR Griffeth of Somerville who received an injury to his arm some time ago as the result of a fall from his horse is well on the way to recovery although the injured member still causes him a little inconvenience. ***

“THE stink pot of Frankston” was how Cr W. J. Oates described Kananook Creek, when asking the Minister of Public Works on Thursday to effect some improvements to the present state of the creek. Cr Hodgins and Messrs J. D. Jennings and J. McComb were also present to urge the Minister to do something so that the natural flow of the creek might be restored. Cr Oates said that at present the creek was in a bad state, and most unhealthy, and as the Government had diverted the water some time ago, it was “up to them” to restore the original flow. Mr J. D. Jennings submitted a plan as prepared by Mr T. McComb by which it was thought the creek could be kept clean. The Minister promised to look into the matter but thought that there was not much money involved to able do anything at present. *** WRINKLES! NATURE does not intend any woman to have the charm of her youthful appearance stolen away, by those lines which care and illhealth so surely mark upon her face. Our Wrinkle Remover holds the secret to restore that fresh and youthful appearance by removing all traces of Wrinkles. Self treatment Effectiveness Guaranteed. Price 5/6. Post Free. Full instructions enclosed. PACIFIC DRUG CO. Molesworth Chambers. Little Collins Street, Melbourne. *** From the pages of the Mornington Standard, 27 April 1918