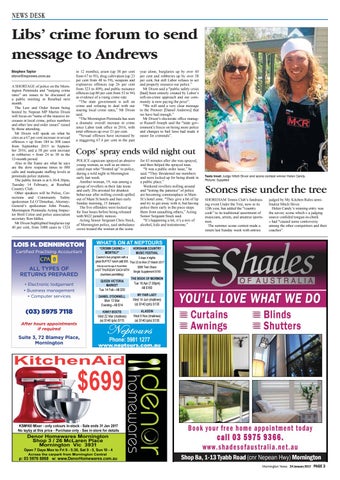 Libs’ crime forum to send message to Andrews Stephen Taylor steve@mpnews.com.au A SHORTAGE of police on the Mornington Peninsula and “surging crime rates” are issues to be discussed at a public meeting in Rosebud next month. The Law and Order forum being hosted by Nepean MP Martin Dixon will focus on “some of the massive increases in local crime, police numbers and other law and order issues” raised by those attending. Mr Dixon will speak on what he cites as a 67 per cent increase in sexual offences – up from 184 to 308 cases from September 2015 to September 2016; and a 58 per cent increase in robberies – from 24 to 38 in the 12-month period. Also in the frame are what he says are the slow response times to 000 calls and inadequate staffing levels at peninsula police stations. The public forum is at 6.30-8.30pm, Tuesday 14 February, at Rosebud Country Club. Other speakers will be Police, Corrections and Community Safety spokesman Ed O’Donohue, AttorneyGeneral’s spokesman John Pesuto, Mornington Peninsula Acting Inspector Brett Coloe and police association secretary Ron Iddles. Mr Dixon highlighted burglaries (up 40 per cent, from 1088 cases to 1524

in 12 months), arson (up 38 per cent from 67 to 93), drug cultivation (up 23 per cent from 48 to 59), weapons and explosives offences (up 26 per cent from 323 to 409), and public nuisance offences (up 80 per cent from 52 to 94) as evidence of a rising crime rate. “The state government is soft on crime and refusing to deal with our soaring local crime rates,” Mr Dixon said. “The Mornington Peninsula has seen a dramatic overall increase in crime since Labor took office in 2014, with total offences up over 21 per cent. “Sexual offences have increased by a staggering 67.4 per cent in the past

year alone, burglaries up by over 40 per cent and robberies up by over 58 per cent, but still Labor refuses to act and properly resource our police.” Mr Dixon said a “public safety crisis [had] been entirely created by Labor’s soft-on-crime approach and our community is now paying the price”. “We will send a very clear message to the Premier [Daniel Andrews] that we have had enough.” Mr Dixon’s electorate office manager Russell Joseph said the “state government’s freeze on hiring more police and changes to bail laws had made it easier for criminals”.

Cops’ spray ends wild night out POLICE capsicum sprayed an abusive young woman, as well as an intoxicated man who “fronted up” to police, during a wild night in Mornington early last week. Another woman, 19, was among a group of revellers in their late teens and early 20s arrested for drunken behaviour after milling crowds spilled out of Main St hotels and bars early Sunday morning, 15 January. The five offenders were locked up for four hours before being released with $622 penalty notices. Acting Senior Sergeant Chris Stock, of Mornington police, said ambulance crews treated the woman at the scene

for 45 minutes after she was sprayed, and then helped the sprayed man. “It was a public order issue,” he said. “They threatened our members and were locked up for being drunk in a public place.” Weekend revellers milling around and “testing the patience” of police are becoming commonplace in Main St’s hotel zone. “They give a bit of lip and try to get away with it, but having police there early in the piece stops them from assaulting others,” Acting Senior Sergeant Stock said. “It’s happening a lot; it’s a mix of alcohol, kids and testosterone.”

Scones rise under the tree SHOREHAM Tennis Club’s fundraising event Under the Tree, now in its 12th year, has added the “country cook” to its traditional assortment of musicians, artists, and amateur sportsmen. The summer scone contest made a return last Sunday week with entries

judged by My Kitchen Rules semifinalist Mitch Skvor. Helen Candy’s winning entry was the savory scone which – a judging source confided tongue-in-cheek – had “caused some controversy among the other competitors and their coaches”.

Only p/p over the age of 18 permitted.

THE BOOK OF MORMON