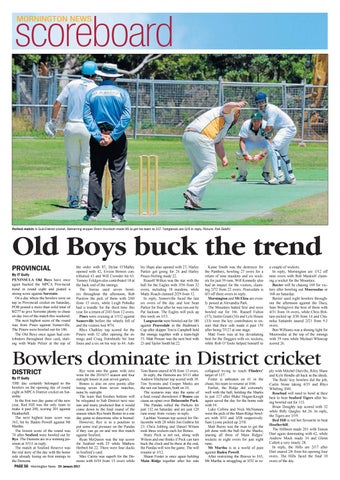 Perfect match: In Sub-District cricket, Balnarring skipper Brent Murdoch made 95 to get his team to 217. Tootgarook are 0/6 in reply. Picture: Rab Siddhi

Old Boys buck the trend PROVINCIAL By IT Gully PENINSULA Old Boys have once again bucked the MPCA Provincial trend in round eight and posted a strong score against Sorrento. On a day where the bowlers were on top in Provincial cricket on Saturday, POB posted a more than solid total of 8/277 to give Sorrento plenty to chase on day two of the match this weekend. The next highest score of the round was from Pines against Somerville. The Piners were bowled out for 186. The Old Boys once again had contributors throughout their card, starting with Wade Pelzer at the top of

the order with 87, Dylan O’Malley opened with 42, Eivion Bowen contributied 43 and Will Crowder hit 63. Tommy Feldgen also contributed 18 at the back end of the innings. The Sorras used seven bowlers throughout the afternoon, Rob Parslow the pick of them with 2/40 from 15 overs, while Leigh Poholke had a trundle for the third time this year for a return of 2/45 from 12 overs. Pines were cruising at 1/112 against Somerville before the wheels fell of and the visitors lost 9/74. Rhys Chalkley top scored for the Piners with 52 after opening the innings and Craig Entwhistle hit four fours and a six on his way to 44. Ash-

ley Hupe also opened with 27, Harley Parker got going for 24 and Harley Peace-Stirling made 22. Russell Wilkes was the star with the ball for the Eagles with 5/36 from 32 overs, including 18 maidens, while Matty Roach claimed 2/29 from 12. In reply, Somerville faced the last six overs of the day and lost Sean Parker for four after he was run-out by Pat Jackson. The Eagles will pick up this week on 1/15. Langwarrin were bowled out for 180 against Pearcedale in the Bushman’s Cup after skipper Travis Campbell held the innings together with a team-high 53. Matt Prosser was the next best with 23 and Taylor Smith hit 22.

Kaine Smith was the destroyer for the Panthers, bowling 27 overs for a return of nine maidens and six wickets for just 39 runs. Will Kennedy also had an impact for the visitors, claiming 2/72 from 22 overs. Pearcedale is 0/3 off three overs in reply. Mornington and Mt Eliza are evenly poised at Alexandra Park. The Mounties batted first and were bowled out for 166. Russell Fulton (57), Justin Grant (34) and Lyle House (33) were the key contributors to ensure that their side made it past 150 after being 7/127 at one stage. Matt Foon was at his devastating best for the Doggies with six wickets, while Rob O’Toole helped himself to

a couple of wickets. In reply, Mornington are 1/12 off nine overs with Rob Maskiell claiming a wicket for the Mounties. Baxter will be chasing 169 for victory after bowling out Moorooduc or 168 on Saturday. Baxter used eight bowlers throughout the afternoon against the Ducs, Sam Wolsgrove the best of them with 4/31 from 16 overs, while Chris Brittain picked up 3/30 from 14 and Chamika Sattambi snared 2/21 from 9.5 overs. Ben Williams was a shining light for Moorooduc at the top of the innings with 59 runs while Michael Whincup scored 26.

By IT Gully THE day certainly belonged to the bowlers on the opening day of round eight in MPCA District cricket on Saturday. In the first two day game of the new year, Red Hill was the only team to make it past 200, scoring 201 against Heatherhill. The next highest team score was 165, hit by Baden Powell against Mt Martha. The lowest score of the round was 74 after Seaford were bowled out by Rye. The Demons are in a winning position at 5/111 in reply. The match at Seaford Reserve was the real story of the day with the home side already losing on first innings to the Demons.

Rye went into the game with zero wins for the 2016/17 season and four outright losses in just seven games. Boneo is also on zero points after losing seven from seven matches, none by outright. The team that finishes bottom will be relegated to Sub District next season and many predicted that it would come down to the final round of the season when Rye hosts Boneo in a one day game to determine who is booted. However, Rye is in a position to put some real pressure on the Pandas if they can go on and win this match against Seaford. Ryan McQueen was the top scorer for Seaford with 25 while Mathew Herbert hit 22. There were four ducks in Seaford’s card. Max Cairns was superb for the Demons with 6/34 from 13 overs while

Tom Baron snared 4/38 from 13 overs. In reply, the Demons are 5/111 after Andrew Hitchener top scored with 39. Tim Symons and Cooper Morks are the not out batsmen, both on 16. The scenario may stay the same of a final round showdown if Boneo can cause an upset over Delacombe Park. The Pandas rolled the Parkers for just 132 on Saturday and are just 120 runs away from victory in reply. Lachlan Yeoman top scored for Delacombe with 28 while Jon Guthrie hit 23. Chris Jobling and Daniel Wilson took three wickets each for Boneo. Stuey Peck is not out, along with Wilson and one thinks if Peck can turn back the clock and be there at the end, the Pandas will win the game. The will resume at 1/12. Shaun Foster is once again holding Main Ridge together after his side

collapsed trying to reach Flinders’ target of 127. Foster is unbeaten on 41 in the chase, his team to resume at 3/46. Earlier, the Ridge did extremely well with the ball, holding the Sharks to just 127 after Blake Hogan-Keogh again saved the day for the home side with 54. Luke Collins and Nick McNamara were the pick of the Main Ridge bowlers with 3/33 and 3/28 respectively. Sam Lyons picked up 2/18. Matt Burns was the man to get the job done with the ball for the Sharks, snaring all three of Main Ridges’ wickets in eight overs for just eight runs. Mt Martha is in a world of pain against Baden Powell. After restricting the Braves to 165, Mt Martha is struggling at 3/32 in re-

ply with Mitchel Darville, Riley Shaw and Kyle Bendle all back in the sheds. The Reds’ key bowlers did the job, Curtis Stone taking 4/35 and Rhys Whitling 3/40. Rosebud will need to bowl at their best to beat Seaford Tigers after being bowled out for 113. Brian Doughty top scored with 32 while Billy Quigley hit 26. In reply, the Tigers are 1/19. Red Hill is red hot favourite to beat Heatherhill. The Hillmen made 201 with Simon Dart again dominating with 62, while Andrew Mock made 34 and Glenn Collett a very timely 28. In reply, the Hills are 2/17 after Dart snared 2/6 from his opening four overs. The Hills faced the final 10 overs of the day.