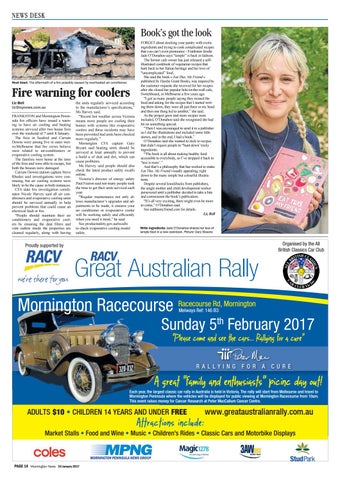 Book’s got the look

Heat blast: The aftermath of a fire possibly caused by overheated air conditioner.

Fire warning for coolers Liz Bell liz@mpnews.com.au FRANKSTON and Mornington Peninsula fire officers have issued a warning to have air cooling and heating systems serviced after two house fires over the weekend of 7 until 8 January. The fires in Seaford and Carrum Downs were among five in outer metro-Melbourne that fire crews believe were related to air-conditioners or evaporative cooling system. The families were home at the time of the fires and were able to escape, but both the houses were damaged. Carrum Downs station captain Steve Rhodes said investigations were continuing, but air cooling systems were likely to be the cause in both instances. CFA state fire investigation coordinator Nicole Harvey said all air conditioners and evaporative cooling units should be serviced annually to help prevent problems that could cause an electrical fault or fire. “People should maintain their air conditioners and evaporative coolers by ensuring the dust filters and vent outlets inside the properties are cleaned regularly, along with having

the units regularly serviced according to the manufacturer’s specifications,” Ms Harvey said. “Recent hot weather across Victoria means more people are cooling their homes with systems like evaporative coolers and these incidents may have been prevented had units been checked more regularly.” Mornington CFA captain Gary Bryant said heating units should be serviced at least annually to prevent a build u of dust and dirt, which can cause problems. Ms Harvey said people should also check the latest product safety recalls online. Victoria’s director of energy safety Paul Fearon said not many people took the time to get their units serviced each year. “Regular maintenance not only allows manufacturer’s upgrades and adjustments to be made, it ensures your air conditioner or evaporative cooler will be working safely and efficiently when you need it most,” he said. See productsafety.gov.au/recalls to check evaporative cooling model safety.

FORGET about stocking your pantry with exotic ingredients and trying to cook complicated recipes that you can’t even pronounce - Frankston foodie Jade O’Donahoo says “simple” is back in fashion. The former cafe owner has just released a selfillustrated cookbook of vegetarian recipes that hark back to her Italian heritage and her love of “uncomplicated” food. She said the book – Eat This, My Friend – published by Hardie Grant Books, was inspired by the customer requests she received for her recipes after she closed her popular hole-in-the-wall cafe, Switchboard, in Melbourne a few years ago. “I got so many people saying they missed the food and asking for the recipes that I started writing them down, they were all just there in my head and then one thing led to another,” she said. As the project grew and more recipes were included, O’Donahoo said she recognised she had hit on something special. “Then I was encouraged to send it to a publisher so I did the illustrations and included some little stories, and in the end, I had a book.” O’Donahoo said she wanted to stick to recipes that didn’t require people to “hunt down’ tricky ingredients. “The book is all about making healthy food accessible to everybody, so I’ve stripped it back to ‘less is more’.” And that’s a philosophy that has worked to make Eat This, My Friend visually appealing, right down to the many simple but colourful illustrations. Despite several knockbacks from publishers, the single mother and child development worker persevered until a publisher decided to take a bite and commission the book’s publication. “It’s all very exciting, there might even be more to come,” O’Donahoo said. See eatthismyfriend.com for details. Liz Bell

Organised by the All British Classics Car Club

A great "family and enthusiasts" picinc day out! Each year, the largest classic car rally in Australia is held in Victoria. The rally will start from Melbourne and travel to Mornington Peninsula where the vehicles will be displayed for public viewing at Mornington Racecourse from 10am. This event raises money for Cancer Research at Peter MacCallum Cancer Centre.