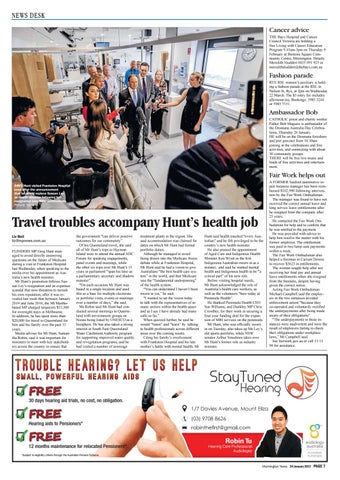 Ambassador Bob CATHOLIC priest and charity worker Father Bob Maguire is ambassador of the Dromana Australia Day Celebrations, Thursday 26 January. HE will be on the Dromana foreshore and pier precinct from 10.30am joining in the celebrations and free activities, and connecting with about 30 community groups. THERE will be free live music and loads of free activities and entertainment.

Fair Work helps out GREG Hunt visited Frankston Hospital soon after the announcement that he would replace Sussan Ley as health minister following her resignation over MPs’ entitlements. Picture: Yanni

Travel troubles accompany Hunt’s health job Liz Bell liz@mpnews.com.au FLINDERS MP Greg Hunt managed to avoid directly answering questions on the future of Medicare during a visit to Frankston Hospital last Wednesday when speaking to the media over his appointment as Australia’s new health minister. Mr Hunt’s promotion follows Sussan Ley’s resignation and an expenses scandal that now threatens to tarnish his own reputation, after it was revealed last week that between January 2014 and June 2016, the Mt Marthabased MP charged taxpayers $15,500 for overnight stays in Melbourne. In addition, he has spent more than $20,000 for travel to Queensland for him and his family over the past 15 years. Media adviser for Mr Hunt, Samantha Robin, said it was important for ministers to meet with key stakeholders across the country to ensure that

the government “can deliver positive outcomes for our community”. Of his Queensland travel, she said all of Mr Hunt’s trips to Hayman Island were to attend the annual ADC Forum for speaking engagements, panel events and meetings, while the other six trips over Mr Hunt’s 15 years in parliament “span his time as a parliamentary secretary and shadow minister”. “On each occasion Mr Hunt was based in a single location and used this as a base for multiple electorate or portfolio visits, events or meetings over a number of days,” she said. Ms Robin said Mr Hunt had conducted several meetings in Queensland with environment groups on Noosa being listed by UNESCO as a biosphere. He has also taken a strong interest in South East Queensland Water Catchment Authority program for supporting improved water quality and revegetation programs, and he had visited a number of sewerage

treatment plants in the region. She said accommodation was claimed for dates on which Mr Hunt had formal portfolio duties. Although he managed to avoid being drawn into the Medicare freeze debate while at Frankston Hospital, Mr Hunt said he had a vision to give Australians “the best health care system” in the world, and that Medicare was the “fundamental underpinning” of the health system. “You can understand I haven’t been sworn in yet,” he said. “I wanted to set the vision today to talk with the representatives of so many sectors within the health space and as I say I have already had many calls so far.” When quizzed further, he said he would “listen” and “learn” by talking to health professionals across different areas over the coming weeks. Citing his family’s involvement with Frankston Hospital and his late mother’s battle with mental health, Mr

Hunt said health touched “every Australian” and he felt privileged to be the country’s new health minister. He also praised the appointment of Aged Care and Indigenous Health Minister Ken Wyatt as the first Indigenous Australian sworn in as a minster, and said he wanted mental health and Indigenous health to be “a critical part” of his new role. Before visiting hospital wards, Mr Hunt acknowledged the role of Australia’s health care workers, as well as the volunteers “here today at Peninsula Health”. He thanked Peninsula Health CEO Sue Williams, and Dunkley MP Chris Crewther, for their work in securing a four-year funding deal for the expansion of MRI services on the peninsula. Mr Hunt, who was officially sworn in on Tuesday, also takes up Ms Ley’s old sports portfolio, while NSW senator Arthur Sinodinos takes over Mr Hunt’s former role as industry minister.

A FORMER Seaford automotive repair business manager has been reimbursed $102,990 following intervention by the Fair Work Ombudsman. The manager was found to have not received the correct annual leave and long service leave entitlements after he resigned from the company after 25 years. He contacted the Fair Work Ombudsman for help and to confirm that he was entitled to the payment. He was provided with advice to help him resolve the matter with his former employer. The entitlement was paid in two lump sum payments within a week. The Fair Work Ombudsman also helped a foreman in Carrum Downs to recover $5623 in entitlements. The woman sought help after not receiving her final pay and annual leave entitlements when she resigned from the business, despite having given the correct notice. Acting Fair Work Ombudsman Michael Campbell said the employers in the two instances avoided enforcement action “because they co-operated and voluntarily rectified the underpayments after being made aware of their obligations”. “The underpayments in these instances were inadvertent and were the result of employers failing to check their obligations under workplace laws,” Mr Campbell said. See fairwork.gov.au or call 13 13 94 for assistance.

*Subject to eligibility criteria through the Australian Pension Scheme.