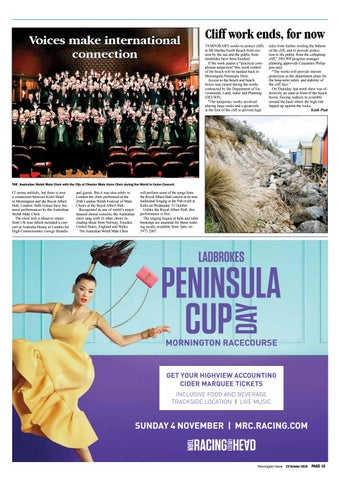 Cliff work ends, for now TEMPORARY works to protect cliffs at Mt Martha North Beach from erosion by the sea and the public from landslides have been finished. If the work passes a “practical completion inspection” this week control of the beach will be handed back to Mornington Peninsula Shire. Access to the beach and beach boxes was closed during the works contracted by the Department of Environment, Land, water and Planning (DELWP). “The temporary works involved placing large rocks and a geotextile at the foot of the cliff to prevent high

tides from further eroding the bottom of the cliff, and to provide protection to the public from the collapsing cliff,” DELWP program manager planning approvals Cassandra Philippou said. “The works will provide interim protection as the department plans for the long-term safety and stability of the cliff face.” On Thursday last week there was effectively no sand in front of the beach boxes, forcing walkers to scramble around the back where the high tide lapped up against the rocks. Keith Platt

THE Australian Welsh Male Choir with the City of Chester Male Voice Choir during the World in Union Concert.

IT seems unlikely, but there is now a connection between Kirks Hotel in Mornington and the Royal Albert Hall, London: both venues have featured performances by the Australian Welsh Male Choir. The choir will is about to return from UK tour which included a concert at Australia House in London for High Commissioner George Brandis

and guests. But it was also while in London the choir performed at the 26th London Welsh Festival of Male Choirs at the Royal Albert Hall. Recognised as one of world’s major massed choral concerts, the Australian choir sang with 16 other choirs including those from Norway, Sweden, United States, England and Wales. The Australian Welsh Male Choir

will perform some of the songs from the Royal Albert Hall concert at its now traditional Singing in the Pub event at Kirks on Wednesday 31 October Unlike the Royal Albert Hall, this performance is free. The singing begins at 8pm and table bookings are essential for those wanting meals, available from 5pm, on 5975 2007.