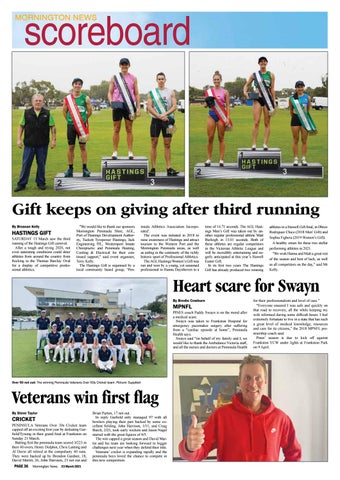 Gift keeps on giving after third running By Brosnan Kelly

SATURDAY 13 March saw the third running of the Hastings Gift carnival. After a tough and trying 2020, not even saturating conditions could deter athletes from around the country from flocking to the Thomas Barclay Oval for a display of competitive professional athletics.

insula Athletics Association Incorporated’. The event was initiated in 2018 to raise awareness of Hastings and attract tourism to the Western Port and the Mornington Peninsula areas, as well as aiding in the continuity of the richly historic sport of Professional Athletics. The AGL Hastings Women’s Gift was run and won by a young, yet seasoned professional in Hanna Duynhoven in a

time of 14.71 seconds. The AGL Hastings Men’s Gift was taken out by another regular professional athlete Matt Burleigh in 13.01 seconds. Both of these athletes are regular competitors in the Victorian Athletic League and will be incredibly entertaining and eagerly anticipated at this year’s Stawell Easter Gift. In its first two years The Hastings Gift has already produced two winning

athletes in a Stawell Gift final, in Dhruv Rodriguez Chico (2018 Men’ Gift) and Sophia Fighera (2019 Women’s Gift). A healthy omen for these two stellar performing athletes in 2021. &quot;We wish Hanna and Matt a great rest of the season and best of luck, as well as all competitors on the day,&quot; said Mr Kelly.

PINES coach Paddy Swayn is on the mend after a medical scare. Swayn was taken to Frankston Hospital for emergency pacemaker surgery after suffering from a “cardiac episode at home”, Peninsula Health says. Swayn said “on behalf of my family and I, we would like to thank the Ambulance Victoria staff, and all the nurses and doctors at Peninsula Health

Over 50 not out: The winning Peninsula Veterans Over 50s Cricket team. Picture: Supplied

PENINSULA Veterans Over 50s Cricket team capped off an exciting first year by defeating Garfield/Tynong in their grand final at Frankston on Sunday 21 March. Batting first the peninsula team scored 3/223 in their 40 overs. Henry Dolphin, Chris Lanting and Al Davie all retired at the compulsory 40 runs. They were backed up by Brendon Gardner, 18, David Martin, 26, John Harrison, 23 not out and

Brian Parton, 17 not out. In reply Garfield only managed 97 with all bowlers playing their part backed by some excellent fielding. John Harrison, 1/11, and Craig Burch, 2/25, took early wickets and Jason Nagel starred with the great figures of 4/5. The win capped a great season and David Martin and his team are looking forward to bigger challenges next year when they defend their title. Veterans’ cricket is expanding rapidly and the peninsula boys loved the chance to compete in this new competition.

for their professionalism and level of care.” “Everyone ensured I was safe and quickly on that road to recovery, all the while keeping my wife informed during some difficult hours. I feel extremely fortunate to live in a state that has such a great level of medical knowledge, resources and care for its citizens,” the 2018 MPNFL premiership coach said. Pines’ season is due to kick off against Frankston YCW under lights at Frankston Park on 9 April.