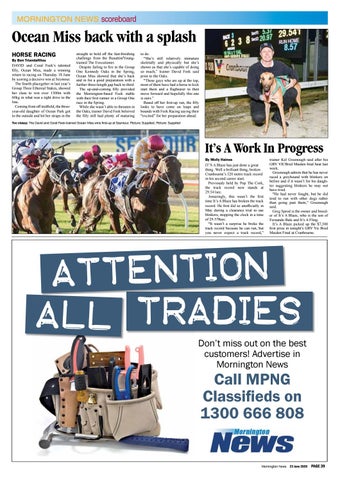 Ocean Miss back with a splash HORSE RACING

By Ben Triandafillou DAVID and Coral Feek’s talented filly, Ocean Miss, made a winning return to racing on Thursday 18 June by scoring a decisive win at Seymour. The fourth placegetter in last year’s Group Three Ethereal Stakes, showed her class to win over 1300m with 60kg in what was a tight drive to the line. Coming from off midfield, the threeyear-old daughter of Ocean Park got to the outside and hit her straps in the

straight to hold off the fast-finishing challenge from the Busuttin/Youngtrained The Executioner. Despite failing to fire in the Group One Kennedy Oaks in the Spring, Ocean Miss showed that she’s back and in for a good preparation with a further three-length gap back to third. The up-and-coming filly provided the Mornington-based Feek stable with their first runner in a Group One race in the Spring. While she wasn’t able to threaten in the Oaks, trainer David Feek believed the filly still had plenty of maturing

to do. “She’s still relatively immature skeletally and physically but she’s shown us that she’s capable of doing so much,” trainer David Feek said prior to the Oaks. “These guys who are up at the top, most of them have had a horse to kick start them and a flagbearer to then move forward and hopefully this one is ours.” Based off her first-up run, the filly looks to have come on leaps and bounds with Feek Racing saying their “excited” for her preparation ahead.

It’s A Work In Progress By Molly Haines IT’S A Blaze has just done a great thing. Well a brilliant thing, broken Cranbourne’s 520 metre track record in his second career start. Previously held by Pop The Cork, the track record now stands at 29.541sec. Amazingly, this wasn’t the first time It’s A Blaze has broken the track record. He first did so unofficially in May during a clearance trial to use blinkers, stopping the clock in a time of 29.578sec. “It wasn’t a surprise he broke the track record because he can run, but you never expect a track record,”

trainer Kel Greenough said after his GRV VICBred Maiden final heat last week. Greenough admits that he has never raced a greyhound with blinkers on before and if it wasn’t for his daughter suggesting blinkers he may not have tried. “He had never fought, but he did tend to run with other dogs rather than going past them,” Greenough said. Greg Sprod is the owner and breeder of It’s A Blaze, who is the son of Fernando Bale and It’s A Fling. It’s A Blaze picked up the $7,500 first prize in tonight’s GRV Vic Bred Maiden Final at Cranbourne.