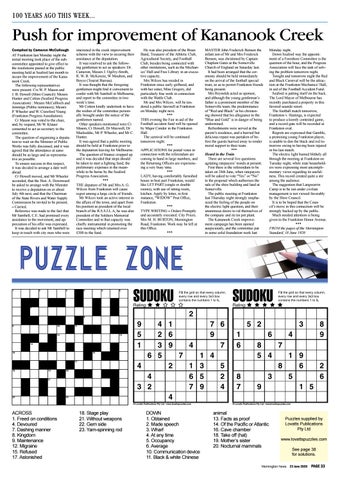 Push for improvement of Kananook Creek Compiled by Cameron McCullough AT Frankston last Monday night the initial meeting took place of the subcommittee appointed to give effect to the resolutions passed at the public meeting held at Seaford last month to secure the improvement of the Kananook Creek. The following representatives were present: Crs W. P. Mason and J. B. Howell (Shire Council): Messrs Hunter and Cotton (Seaford Progress Association) : Messrs McCullloch and Jennings (Public nominees); Messrs P. Wheeler and W. Crawford Young (Frankston Progress Assodiation). Cr Mason was voted to the chair, and, by request, Mr W. Klauer consented to act as secretary to the committee. The question of organising a deputation to wait on the Minister of Public Works was fully discussed, and it was agreed that the attendance at same should be as large and as representative as possible. To ensure success in this respect, it was decided to arrange a date well ahead. Cr Howell moved, and Mr Wheeler seconded, that the Hon. A. Downward be asked to arrange with the Minister to receive a deputation on or about July 4th next, and that the Chairman of the State Rivers and Water Supply Commission be invited to be present. – Carried. Reference was made to the fact that Mr Sambell, C.E. had promised every assistance to the movement, and appreciation of his offer was expressed. It was decided to ask Mr Sambell to keep in touch with city men who were

interested in the creek improvement scheme with the view to securing their assistance at the deputation. It was resolved to ask the following gentlemen to act as speakers: Dr. Cameron; Messrs J. Ogilvy-Smith, R. W. B. McKenzie, W Moulton, and Boyce (Tourist Bureau). It was thought that the foregoing gentlemen might find it convenient to confer with Mr Sambell in Melbourne, and report to the committee in two week’s time. Mr Cotton kindly undertook to have the wishes of the committee personally brought under the notice of the gentlemen named. Other speakers mentioned were Cr Mason, Cr Howell, Dr Maxwell, Dr Mackeddie, Mr P. Wheeler, and Mr C. Hunter. It was agreed that a public meeting should be held at Frankston prior to the deputation leaving for Melbourne. The question of finance cropped up and it was decided that steps should be taken to start a fighting fund, the preliminary expenses in the meanwhile to be borne by the Seaford Progress Association. *** THE depature of Mr and Mrs A. G. Wilcox from Frankston will cause regret among a large circle of friends. Mr Wilcox took an active interest in the affairs of the town, and apart from his position as president of the local branch of the R.S.S.I.L.A, he was also president of the Soldiers Memorial Committee and in that capacity was chiefly instrumental in promoting the race meeting which returned over £300 to the fund.

He was also president of the Brass Band, Treasurer of the Athletic Club, Agricultural Society, and Football Club, besides being connected with other institutions, such as the Mechanics’ Hall and Free Library in an executive capacity. Mrs Wilcox has resided in Frankston since early girlhood, and with her sister, Miss Gregory, did particularly fine work in connection with the Wattle Club. Mr and Mrs Wilcox. will be tendered a public farewell at Frankston on Monday night next. *** THIS evening the Fair in aid of the Football accident fund will be opened by Major Condor in the Frankston Hall. The carnival will be continued tomorrow night. *** APPLICATIONS for postal votes in connection with the referendum are coming to hand in large numbers, and the Returning Officers are experiencing a very busy time. *** LADY, having comfortably furnished house in best part Frankston, would like LET PART (single or double rooms), with use of sitting room, kitchen. Apply by letter, in first instance, “WIDOW” Post Office, Frankston. *** TYPE WRITING – Orders Promptly and accurately executed. City Prices. Mrs M. H. BURTON, Mornington Road, Frankston. Work may be left at this Office. ***

MASTER John Frederick Benson the infant son of Mr and Mrs Frederick Benson, was christened by Captain Chaplain Gates at the Somerville Church of England on Saturday last. It had been arranged that the ceremony should be held immediately on the arrival of the football special train, so as to permit Frankston friends being present. Mrs Reynolds acted as sponsor, and although the young gentleman’s father is a prominent member of the Somerville team, the predominance of “Red and Black” at his christening showed that his allegiance to the “Blue and Gold” is in danger of being undermined. Refreshments were served at the parent’s residence, and a hurried but delicious repast was partaken of before the guests hurried away to render moral support to their team. *** Heard in the Train There are several live questions agitating ratepayers’ minds at present. First there is the referendum to be taken on 24th June, when ratepayers will be asked to vote “Yes” or “No” to the proposal which authorises the sale of the shire building and land at Somerville. The public meeting at Frankston last Thursday night strongly emphasized the feeling of the people on the electric light question, and their unanimous desire to rid themselves of the company and its tin pot plant. The Kananook Creek improvement campaign has been opened auspiciously, and the committee put in some solid foundation work last

Monday night. Down Seaford way the appointment of a Foreshore Committee is the question of the hour, and the Progress Association will face the task of solving the problem tomorrow night. Tonight and tomorrow night the Red and Black Carnival will be the attraction at the Frankston Mechanics’ Hall, in aid of the Football Accident Fund. Seaford is patting itself on the back. The Lord Mayor of Melbourne has recently purchased a property in this favored seaside resort. The football match tomorrow, Frankston v. Hastings, is expected to produce a keenly contested game, and a record gate will be recorded at Frankston oval. Regrets are expressed that Gamble, a promising young Frankston player, is unable to don the black and red tomorrow owing to having been injured in his last match. The electric light burned blithely all through the meeting at Frankston on Tuesday night, while irate householders were expressing most uncomplimentary views regarding its usefulness. This record created quite a stir among the audience. The suggestion that Langwarrin Camp is to be run under civilian management is not viewed favorably by the Shire Council. It is to be hoped that the Council’s move in this connection will be strongly backed up by the public. Much needed attention is being given to the Frankston Honor Avenue. *** FROM the pages of the Mornington Standard, 18 June 1920