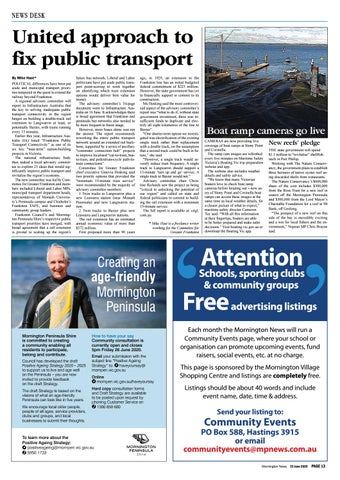 United approach to fix public transport By Mike Hast* POLITICAL differences have been put aside and municipal transport priorities tempered in the quest to extend the railway beyond Frankston. A regional advisory committee will report to Infrastructure Australia that the key to solving inadequate public transport connectivity in the region hinges on building a double-track rail extension to Langwarrin at least, or potentially Baxter, with trains running every 15 minutes. Earlier this year, Infrastructure Australia (IA) listed “Frankston Public Transport Connectivity” as one of its six key “near-term” nation-building projects in Victoria. The national infrastructure body then tasked a local advisory committee to explore 23 ideas that would significantly improve public transport and revitalise the region’s economy. The new committee was led by Committee for Greater Frankston and members included Liberal and Labor MPs, municipal transport department heads, representatives of Monash University’s Peninsula campus and Chisholm’s Frankston TAFE, and business and community group leaders. Frankston Council’s and Mornington Peninsula Shire’s respective public transport priorities have merged, with broad agreement that a rail extension is pivotal to scaling up the region’s

future bus network. Liberal and Labor politicians have put aside public transport point-scoring to work together on identifying which train extension options would deliver best value for money. The advisory committee’s 54-page document went to Infrastructure Australia on 16 June. It acknowledges there is broad agreement that Frankston and peninsula bus networks also needed to be more frequent to boost usage. However, more buses alone was not the answer. The report recommends reworking the entire public transport network around an extended rail backbone, supported by a series of ancillary “commuter connection hub” projects to improve localised “car-to-train, busto-train, and pedestrian–cycle path-totrain connections”. Committee for Greater Frankston chief executive Ginevra Hosking said two priority options that provided the “minimum 15-minute train service” were recommended by the majority of advisory committee members: 1 Twin tracks to Langwarrin plus a new Leawarra station (near Monash Peninsula) and new Langwarrin station. 2 Twin tracks to Baxter plus new Leawarra and Langwarrin stations. The rail extension has an estimated annual economic value of more than $572 million. First proposed more than 90 years

ago, in 1929, an extension to the Frankston line has an initial budgeted federal commitment of $225 million. However, the state government has yet to financially support or commit to its construction. Ms Hosking said the most controversial aspect of the advisory committee’s report was “what to do if, without state government investment, there was insufficient funds to duplicate and electrify all eight kilometres of the line to Baxter”. “One shorter-term option we investigated was electrification of the existing single track rather than replacement with a double track, on the assumption that a second track could be built in future,” she said. “However, a single track would severely reduce train frequency. A single track to Langwarrin should support a 15-minute ‘turn up and go’ service. A single track to Baxter would not.” Advisory committee chair Christine Richards saw the project as being “critical to unlocking the potential of our region” and called on state and federal politicians to commit to building the rail extension with a minimum 15-minute service. The full report is available at: c4gf. com.au * Mike Hast is a freelance writer working for the Committee for Greater Frankston

Creating an age-friendly Mornington Peninsula Mornington Peninsula Shire is committed to creating a community enabling all residents to participate, belong and contribute. Council has developed the draft Positive Ageing Strategy 2020 – 2025 to support us to live and age well on the Peninsula – you are now invited to provide feedback on the draft Strategy. The draft Strategy is based on the visions of what an age-friendly Peninsula can look like in five years. We encourage local older people, people of all ages, service providers, clubs and groups, and local businesses to submit their thoughts.

How to have your say Community consultation is currently open and closes 5pm Friday 26 June 2020. Email your submission with the subject line “Positive Ageing haveyoursay@ Strategy” to: mornpen.vic.gov.au Online mornpen.vic.gov.au/haveyoursay Hard copy consultation forms and Draft Strategy are available to be posted upon request by phoning Customer Service on 1300 850 600

To learn more about the Positive Ageing Strategy: positiveageing@mornpen.vic.gov.au 5950 1733

Boat ramp cameras go live CAMERAS are now providing live coverage of boat ramps at Stony Point and Corinella. The ramp cam images are refreshed every five minutes on Maritime Safety Victoria’s Boating Vic trip preparation website and app. The website also includes weather details and safety advice. “We know that many Victorian boaters love to check boat ramp cameras before heading out – now users of Stony Point and Corinella boat ramps can access these images at the same time as local weather details, for a clearer picture of what to expect,” maritime safety director Cameron Toy said. “With all this information at their fingertips, boaters are able to be better prepared and make safer decisions.” Visit boating.vic.gov.au or download the Boating Vic app.

New reefs’ pledge THE state government will spend $1.1 million to “revitalise” shellfish reefs in Port Phillip. Working with The Nature Conservancy, the government plans to establish three hectares of native oyster reef using discarded shells from restaurants. The Nature Conservancy’s $600,000 share of the cost includes $300,000 from the Ross Trust for a new reef in waters off the Mornington Peninsula and $300,000 from the Lord Mayor’s Charitable Foundation for a reef at 9ft Bank, off Geelong. “The prospect of a new reef on this side of the bay is incredibly exciting and a win for local fishers and the environment,” Nepean MP Chris Brayne said.

Free advertising listings Each month the Mornington News will run a Community Events page, where your school or organisation can promote upcoming events, fund raisers, social events, etc. at no charge. This page is sponsored by the Mornington Village Shopping Centre and listings are completely free. Listings should be about 40 words and include event name, date, time & address.