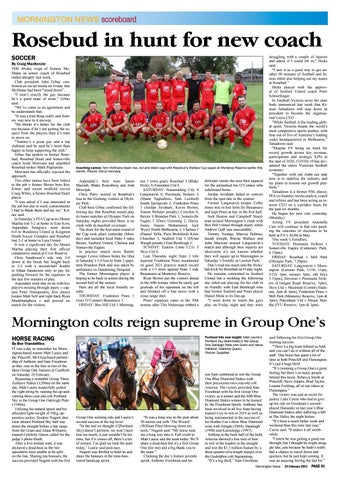 By Craig MacKenzie THE 40-day reign of Tommy McShane as senior coach of Rosebud ended abruptly last week. Club president John Grbac confirmed on social media on Friday that McShane had been “stood down”. “I won’t crucify the guy because he’s a good mate of mine,” Grbac said. “We’ve come to an agreement and he understands that. “It was a trial thing really and Tommy was new to it anyway. “He thinks it’s better for the club too because if he’s not getting the respect from the players then it’s time to move on. “Tommy’s a great guy and a top clubman and he said he’s more than happy to keep supporting the club.” Grbac has spoken to former Rosebud, Rosebud Heart and Somerville coach Scott Morrison and unsettled Rosebud striker Mark Pagliarulo. Morrison has officially rejected the approach. Two other names have been linked to the job – former Baxter boss Roy Kilner and recent midfield recruit Craig White, a former Rosebud Heart player. “I was asked if I was interested in the job but due to work commitments I had to thank them and say no,” Kilner said. In Saturday’s FFA Cup news Mount Martha lost 5-2 at home to East Kew, Aspendale Stingrays went down 6-0 to Bundoora United at Kingston Heath Soccer Complex and Rosebud lost 2-1 at home to Lara United. It was a significant day for Mount Martha playing their first official competitive match at Civic Reserve. Chris Sanderson’s side was 3-0 down at the break but fought back to 3-2 with a second-half double to Ethan Sanderson only to pay for pushing forward for the equaliser in the last few minutes of play. Aspendale went into its tie with key players missing through injury – captain Peter Dimopoulos, first choice keeper Matt Self and right back Ryan Maokhamphiou – and proved no match for the visitors.

Aspendale’s best were James Macnab, Blake Rosenberg and Josh Mravljak. Chris Parry scored in Rosebud’s loss to the Geelong visitors at Olympic Park. Club boss Grbac confirmed the following day that Rosebud would play its home matches at Olympic Park on Saturday nights provided there is no clash with its baseball co-tenant. The draw for the first main round of the Cup took place yesterday (Monday) and included local State 4 sides Baxter, Seaford United, Chelsea and Somerville Eagles. In practice match news Baxter winger Lewis Gibson broke his tibia in Saturday’s 1-0 loss to State 2 opponent Brandon Park and was taken by ambulance to Dandenong Hospital. The former Mornington player is hoping to be back in action during the second half of the season. Here are all the local friendly results: THURSDAY: Frankston Pines 1 (Joey O’Connor) Beaumaris 1. FRIDAY: Box Hill Utd 3 Morning-

defender inside the area then squared for the unmarked Joe O’Connor who sidefooted home. Jordan Avraham failed to convert from the spot late in the contest. Former Langwarrin keeper Colby Jones was in fine form for Beaumaris and kept Pines at bay in the first half. Josh Heaton and Campbell Steedman missed Mornington’s clash with Box Hill United through injury while Andrew Goff was unavailable. Tommy Youngs, Marcus Holmes, Isaiah Joseph, Wayne Wallace and John Maclean missed Langwarrin’s match and although their injuries are short-term it’s not known whether they will square up to Mornington in Saturday’s friendly at Lawton Park. Don’t read too much into the Hicks’ hat-trick for Rosebud on Friday night. He remains committed to Seaford United but a wedding the following day ruled out playing for his club in its friendly with East Bentleigh who had former Seaford and Pines player Daniel Mota in its line-up. “I went down to watch the guys play on Friday night and they were

struggling with a couple of injuries and asked if I could fill in,” Hicks said. “I saw it as a good way to get another 90 minutes of football and fitness while also helping out my mates at Rosebud.” Hicks played with the approval of Seaford United coach Peter Schwellinger. In Football Victoria news the state body announced last week that Kimon Taliadoros will step down as president to become the organisation’s new CEO. “While football is the leading global sport, Victoria boasts the world’s most competitive sports market, with four out of five of Australia’s leading codes headquartered in Melbourne,” Taliadoros said. “Despite FV being on track for record growth across key revenue, participation and strategic KPIs at the start of 2020, COVID-19 has devastated the entire Victorian football economy. “Together with our clubs our task now is to stabilise the industry and lay plans to resume our growth platform.” Taliadoros is a former NSL player, PFA co-founder, media analyst, coach and referee and has been acting as interim CEO on a caretaker basis for the past six months. He began his new role yesterday (Monday). Acting FV president Antonella Care will continue in that role pending the outcome of elections to be held at FV’s AGM in May. This week’s friendlies: TUESDAY: Peninsula Strikers v Somerville Eagles (Centenary Park, 6.15pm). FRIDAY: Rosebud v Mill Park (Olympic Park, 7.30pm). SATURDAY: Langwarrin v Mornington (Lawton Park, U19s 11am, U21s 1pm, seniors 3pm, old boys 5.15pm), Doveton v Peninsula Strikers (Crinigan Road Reserve, 1pm), Skye Utd v Mazenod (Comets Stadium, 2pm & 4pm), Frankston Pines v Mill Park (Monterey Reserve, 1pm & 3pm), Pakenham Utd v Mount Martha (IYU Reserve, 1pm & 3pm).

By Ben Triandafillou IT was a day to remember for Mornington-based trainer Matt Laurie and the Pinecliff, Mt Eliza-based partnership of Anthony and Sam Freedman as they rose to the fore in two of the three Group One features at Caulfield on Saturday 20 February. Bypassing a winnable Group Three Zeditave Stakes (1200m) on the same day, Matt Laurie masterfully pulled the right string by running his up-andcoming three-year-old colt Portland Sky in the Group One Oakleigh Plate (1100m). Utilising his natural speed and his allocated light-weight of 50kg, apprentice jockey Teodore Nugent shot clear aboard Portland Sky half way down the straight before a late surge from the Grant and Alana Williamstrained Celebrity Queen called for the judge’s photo finish. After a five-minute wait, it was declared a dead-heat as the two speedsters were unable to be split on the line. Sharing top honours, the success provided Nugent with his first

Group One winning ride and Laurie’s second success at the top level. “In the end we thought if [Portland Sky] doesn’t perform, we won’t have lost too much, it just wouldn’t be his time, but if it comes off, there’s a lot of reward. I’m glad we took the punt today,” Laurie said post-race. Nugent was thrilled to hold on and share the honours in the time-honoured handicap sprint.

“It was a long way to the post about 50 metres out with ‘The Wizard’ (William Pike) blowing down my neck,” Nugent said. “My horse took me a long way into it. Full credit to Matt Laurie and the team today. We’ll share a dead-heat but it’s a first Group One (for me) and a big thank you to the team.” Claiming the day’s feature juvenile sprint, Anthony Freedman and his

son Sam combined to win the Group One Blue Diamond Stakes with their precocious two-year-old colt Artorius. The victory provided Sam Freedman with his first Group One victory as a trainer and the fifth Blue Diamond Stakes winner to be trained by the Freedman family. Anthony has been involved in all five feats having trained Lyre to win in 2019 as well as being instrumental in the success of his brother Lee’s three Blue Diamond wins with Alinghi (2004), Danelagh (1998) and Knowledge (1997). Settling in the back half of the field, Artorius showed a fine turn of foot to reel in the leaders in the straight and win the $1.5 million feature by a three-quarter-of-a-length margin over the Godolphin colt Ingratiating. “It’s a big thrill,” Sam Freedman

said following his first Group One training success. “There’s a big team behind us both and you can’t do it without all of the staff. This horse has spent a lot of time at both Pinecliff and Flemington. It’s just a huge thrill. “It’s (winning a Group One) a great feeling but there’s so many people behind this horse. Rebecca Smith at Pinecliff, Steve Adams, Brad Taylor, Leanne Fielding, all of our riders at Flemington.” The victory was just as sweet for jockey Luke Currie who had to give up his ride on Freedman’s secondplaced Hanseatic in last year’s Blue Diamond Stakes after suffering a fall at The Valley the night before. “It’s been a much better week and weekend than this time last year,” Currie said. “It makes it all worthwhile. “I knew he was getting a good run through, but I thought he might struggle late, just because he hadn’t really had a chance to travel down and quicken, but he just kept coming. It was an amazing feeling the last bit.”