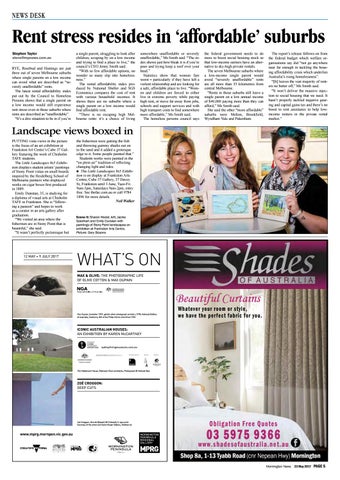 Rent stress resides in ‘affordable’ suburbs Stephen Taylor steve@mpnews.com.au RYE, Rosebud and Hastings are just three out of seven Melbourne suburbs where single parents on a low income can avoid what are described as “severely unaffordable” rents. The latest rental affordability index put out by the Council to Homeless Persons shows that a single parent on a low income would still experience rent stress even in these suburbs where rents are described as “unaffordable”. “It’s a dire situation to be in if you’re

a single parent, struggling to look after children, scraping by on a low income and trying to find a place to live,” the council’s CEO Jenny Smith said. “With so few affordable options, no wonder so many slip into homelessness.” The rental affordability index produced by National Shelter and SGS Economics compares the cost of rent with various household incomes. It shows there are no suburbs where a single parent on a low income would find affordable rent. “There is no escaping high Melbourne rents: it’s a choice of living

somewhere unaffordable or severely unaffordable,” Ms Smith said. “The index shows just how bleak it is if you’re poor and trying keep a roof over your head.” Statistics show that women fare worst – particularly if they have left a violent relationship and are looking for a safe, affordable place to live. “Women and children are forced to either live in extreme poverty while paying high rent, or move far away from jobs, schools and support services and with high transport costs to find somewhere more affordable,” Ms Smith said. The homeless persons council says

the federal government needs to do more to boost social housing stock so that low-income earners have an alternative to sky-high private rentals. The seven Melbourne suburbs where a low-income single parent would avoid “severely unaffordable” rents are all more than 35 kilometres from central Melbourne. “Rents in those suburbs still leave a single parent on a low annual income of $40,000 paying more than they can afford,” Ms Smith said. She said the other “more affordable” suburbs were Melton, Brookfield, Wyndham Vale and Pakenham.

The report’s release follows on from the federal budget which welfare organisations say did “not go anywhere near far enough in tackling the housing affordability crisis which underlies Australia’s rising homelessness”. “[It] leaves the vast majority of renters no better off,” Ms Smith said. “It won’t deliver the massive injection to social housing that we need. It hasn’t properly tackled negative gearing and capital gains tax and there’s no boost to rent assistance to help lowincome renters in the private rental market.”

Landscape views boxed in PUTTING vista views in the picture is the focus of an art exhibition at Frankston Art Centre’s Cube 37 Gallery featuring the work of Chisholm TAFE students. The Little Landscapes 9x5 Exhibition displays student artists’ paintings of Stony Point vistas on small boards inspired by the Heidelberg School of Melbourne painters who displayed works on cigar boxes first produced in 1889. Emily Dunstan, 35, is studying for a diploma of visual arts at Chisholm TAFE in Frankston. She is “following a passion” and hopes to work as a curator in an arts gallery after graduation. “We visited an area where the fishermen are in Stony Point that is beautiful,” she said. “It wasn’t perfectly picturesque but

the fishermen were gutting the fish and throwing gummy sharks out on to the sand and it added a grotesque edge to it. Some people painted that.” Students works were painted in the “en plein air” tradition of reflecting changing light and tides. n The Little Landscapes 9x5 Exhibition is on display at Frankston Arts Centre, Cube 37 Gallery, 37 Davey St, Frankston until 3 June, Tues-Fri 9am-5pm, Saturdays 9am-2pm, entry free. See thefac.com.au or call 9784 1896 for more details. Neil Walker

Whatever your room or style, we have the per fect fabric for you .