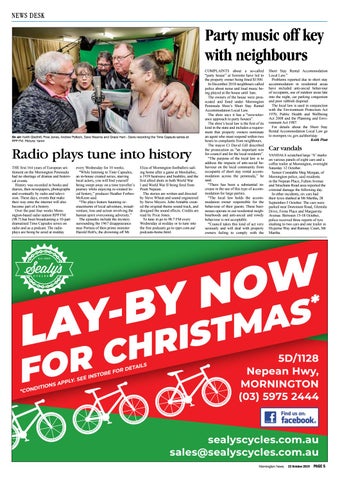 Party music off key with neighbours

Radio plays tune into history THE first 164 years of European settlement on the Mornington Peninsula had no shortage of dramas and historical events. History was recorded in books and diaries, then newspapers, photographs and eventually by radio and television. These days, events that make their way onto the internet will also become part of a history. Over the past four weeks Mornington-based radio station RPP FM (98.7) has been broadcasting a 10-part dramatised Time Capsules series on radio and as a podcast. The radio plays are being be aired at midday

every Wednesday for 10 weeks. “While listening to Time Capsules, an in-house created series, starring local actors, you will find yourself being swept away on a time traveller’s journey while enjoying re-created local history,” producer Heather ForbesMcKeon said. “The plays feature haunting reenactments of local adventure, misadventure, loss and action involving the human spirit overcoming adversity.” The episodes include the mystery surrounding the 1967 disappearance near Portsea of then prime minister Harold Holt's, the drowning off Mt

Eliza of Mornington footballers sailing home after a game at Mordialloc, a 1939 heatwave and bushfire, and the first allied shots in both World War I and World War II being fired from Point Nepean. The stories are written and directed by Steve Wheat and sound engineered by Steve Meyers. John Annable created the original theme sound track, and designed the sound effects. Credits are read by Pixie Jones. To tune in go to 98.7 FM every Wednesday at midday or to tune into the free podcasts go to rppv.com.au/ podcasts-home.html.

COMPLAINTS about a so-called “party house” at Sorrento have led to the property owner being fined $1500. In December 2018 neighbours called police about noise and loud music being played at the house until 3am. The owners of the house were prosecuted and fined under Mornington Peninsula Shire’s Short Stay Rental Accommodation Local Law. The shire says it has a “zero-tolerance approach to party houses”. The shire’s local law is the first of its kind in the state and includes a requirement that property owners nominate an agent who must respond within two hours to complaints from neighbours. The mayor Cr David Gill described the prosecution as “an important win for council and for the local residents”. “The purpose of the local law is to address the impacts of anti-social behaviour on the local community from occupants of short stay rental accommodation across the peninsula,” he said. “There has been a substantial increase in the use of this type of accommodation for large parties. “The local law holds the accommodation owner responsible for the behaviour of their guests. These businesses operate in our residential neighbourhoods and anti-social and rowdy behaviour is not acceptable. “Council takes this kind of act very seriously and will deal with property owners failing to comply with the

Short Stay Rental Accommodation Local Law.” Problems reported due to short stay accommodation in residential areas have included anti-social behaviour of occupants, use of outdoor areas late into the night, car parking congestion and poor rubbish disposal. The local law is used in conjunction with the Environment Protection Act 1970, Public Health and Wellbeing Act 2008 and the Planning and Environment Act 1987. For details about the Short Stay Rental Accommodation Local Law go to mornpen.vic.gov.au/shortstay Keith Platt