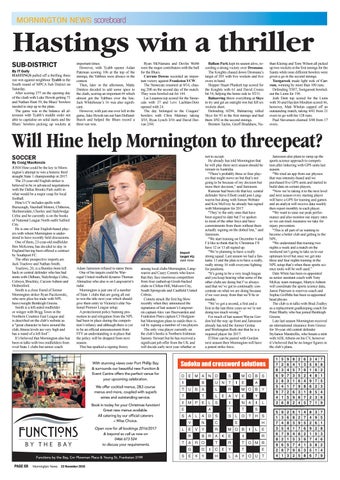 Hastings win a thriller SUB-DISTRICT By IT Gully HASTINGS pulled off a thrilling three run win against neighbour Tyabb in the fourth round of MPCA Sub District on Saturday. After scoring 277 on the opening day of the clash with Luke Hewitt getting 71 and Nathan Hunt 59, the Blues’ bowlers needed to step up to the plate. The game was in the balance all afternoon with Tyabb’s middle order not able to capitalise on solid starts and the Blues’ bowlers picking up wickets at

important times. However, with Tyabb opener Aidan Pateman scoring 106 at the top of the innings, the Yabbies were always in the contest. Then, later in the afternoon, Matty Dimkos decided to add some spice to the clash, scoring an important 44 which almost got the Yabbies over the line. Jack Whitehouse’s 16 was also significant. However, with just one over left in the game, Jake Hewitt ran out Sam HollandBurch and helped the Blues record a three run win.

Ryan McNamara and Devlin Webb were the major contributors with the ball for the Blues. Carrum Downs recorded an important victory against Frankston YCW. The Stonecats resumed at 0/14, chasing 208 on the second day of the match. They were bowled out for 144. Lai Leaunoa top scored for the Stonecats with 37 and Levi Lachlan-Dore opened with 24. The day belonged to the Cougars’ bowlers with Chris Maloney taking 3/35, Ryan Lynch 3/16 and David Dervan 2/44.

Ballam Park kept its season alive, recording a strong victory over Dromana. The Knights chased down Dromana’s target of 205 with five wickets and five overs in hand. Skipper Stuart Plunkett top scored for the Knights with 61 and David Crosss hit 54, helping the home side to 5/211. Balnarring threw everything at Skye to try and get an outright win but fell six wickets short. Defending 6/294, Balnarring rolled Skye for 93 in the first innings and had them 3/92 in the second innings. Brenton Taylor, Geoff Bradshaw, Na-

than Kleinig and Tony Wilson all picked up two wickets in the first innings for the Saints while nine different bowlers were given a go in the second innings. Tootgarook made light wok of Carrum, winning by more than 100 runs. Defending 7/307, Tootgarook bowledout the Lions for 194. Josh Dent top scored for the Lions with 50 and Hayden Moulton scored 46, however, Matt Whelan capped off an outstanding match, taking 4/42 from 21 overs to go with his 128 runs. Paul Stevenson claimed 3/48 from 17 overs.

By Craig MacKenzie JOSH Hine could be the key to Mornington’s attempt to win a historic third straight State 1 championship in 2017. The 25-year-old English striker is believed to be in advanced negotiations with the Dallas Brooks Park outfit in what would be a major coup for local football. Hine’s CV includes spells with Burscough, Vauxhall Motors, Clitheroe, Skelmersdale, Chorley and Stalybridge Celtic and he currently is on the books of National League North outfit Salford City. He is one of four English-based players with whom Mornington is understood to have recently held discussions. One of them, 23-year-old midfielder Ben McKenna, has decided to stay in England having been offered a contract by Southport FC. The other prospective imports are Jack Truelove and Nathan Smith. Truelove, 20, is a Burnley-born left back or central defender who has had stints with Oldham, Stalybridge Celtic, Colwyn, Brackley, Curzon Ashton and Hednesford. Smith is a close friend of former Mornington striker Ryan Paczkowski, who now plies his trade with NPL heavyweight Bentleigh Greens. Smith is a left-sided midfielder or winger with Brigg Town in the Northern Counties East League and is described on the club’s website as a “great character to have around the club, fitness levels are very high and has a wand of a left foot”. It’s believed that Mornington also has been in talks with two midfielders from rival State 1 clubs but senior coach

Adam Jamieson refused to name them. One of his targets could be Warragul United midfield dynamo Thomas Ahmadzai who also is on Langwarrin’s radar. Mornington is just one of a number of State 1 clubs that are going all out to win the title next year which should give them entry to Victoria’s elite National Premier League setup. A protectionist policy banning promotion to and relegation from the NPL had been in place during the competition’s infancy and although there is yet to be an official announcement from FFV an understanding is in place that the policy will be dropped from next season. This has sparked a signing frenzy

among local clubs Mornington, Langwarrin and Casey Comets who know that they face enormous competition from four cashed-up Greek-backed clubs in Clifton Hill, Malvern City, South Springvale and Caulfield United Cobras. Comets struck the first big blow recently when they announced the signatures of last season’s Langwarrin captain Alex van Heerwarden and Frankston Pines captain CJ Hodgson but Mornington plans to outdo their rival by signing a number of visa players. The only visa player currently on the club’s books is Northern Irishman Sammy Stewart but he has received a significant job offer from the UK and will decide early next year whether or

With stunning views over Port Phillip Bay & surrounds our beautiful new Function & Event Centre offers the perfect venue for your upcoming celebration. We offer cocktail menus, 2&3 course menus and more, coupled with superb wines and outstanding service. Book in today for your Christmas function! Great new menus available. čV>ÌiÀ}LÞÕÀvwV>V>ÌiÀiÀÃ – Wise Choice. Open now for all bookings 2016/2017 & beyond so call us now on 0466 673 524 to discuss your requirements. Functions by the Bay, Cnr Plowman Place & Young St, Frankston 3199

not to accept. He already has told Mornington that he will play there next season should he remain in Australia. “There’s probably three or four players that might move on but that’s not going to be because of my decision but more their decision,” said Jamieson. Rumour had been rife that key central defender Steve Elliott could join Langwarrin but along with Simon Webster and Kris McEvoy he already has signed with Mornington for 2017. “They’re the only ones that have been signed to date but I’ve spoken to most of the other boys and have commitments from them without them actually signing on the dotted line,” said Jamieson. “We start training on December 6 and I’d like to think that by Christmas I’ll have 12 or 13 all signed up. “We’re planning to have a really strong squad. Last season we had a fantastic 13 and the plan is to have a really, really strong 16 with everyone fighting for positions. “It’s going to be a very tough league and you keep hearing what some of the other clubs are doing but I’ve always said that we’ve got to continually concentrate on what we are doing because if we veer away from that we’ll be in trouble. “We’ve got a second, a first and a first in the last three years so we’re not doing too much wrong.” For much of last season Wayne Gordon led the way up front and Jamieson already has told the former Gretna and Workington Reds star that he is a required player for 2017. If Hine can be paired with Gordon next season then Mornington will have a potent strike force.

Jamieson also plans to ramp up the sports science approach to competition after tinkering with GPS units last season. “We tried an app from our physios that was intensity-based and we purchased five GPS units and started to build data on certain players. “Now we’re taking it to the next level and next season every starting player will have a GPS for training and games and an analyst will receive data weekly then report monthly to each player. “We want to raise our peak performance and also monitor our injury rates so we can track measures we take for injury prevention. “This is all part of us wanting to become a better club and getting to the NPL. “We understand that training two nights a week and a match on the weekend isn’t going to take us to our optimum level but once we get into three and four nights training in the NPL setup that’s when these sports science tools will be well used.” Dale White has been re-appointed as senior assistant coach with Tony McKay team manager, Martyn Ashton will coordinate the sports science data, Jamie Paterson is reserves coach and Sophie Griffiths has been re-appointed head physio. The club is in talks with Brad Zealley as a replacement goalkeeping coach for Peter Blasby who has joined Bentleigh Greens. Late last season Mornington received an international clearance from Greece for 36-year old central defender Stylianos Maistrellis, who boasts a stint with AEK Athens on his CV, however it’s believed that he no longer figures in the club’s plans.