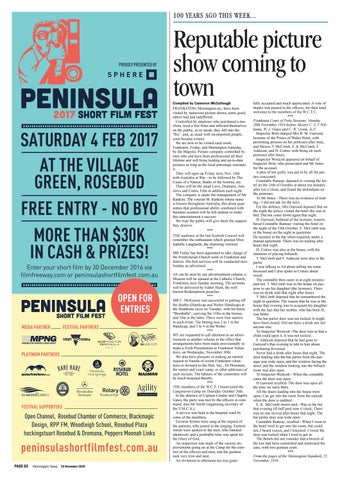 Compiled by Cameron McCullough FRANKSTON, Mornington etc, have been visited by numerous picture shows, some good, others bad and indifferent. Controlled by amateurs who purchased a machine, tried a few films and inflicted themselves on the public, so to speak, they fell into the ‘Biz’. and, as usual with incompetent people, soon became extinct. We are now to be visited each week; Frankston, Friday, and Mornington Saturday, by the Majestic Picture company controlled by men who and have been professional all their lifetime and will bring leading and up-to-date pictures as long as the local patronage warrants it. They will open on Friday next, Nov. 24th with Australia at War - to be followed by The Cause of a Nation; Battle of the Somme, etc. There will be the usual Love, Dramatic, Sensitive and Comic Film in addition each night. The company is under the management of Mr Rankini. The veteran M. Rankini whose name is known throughout Australia, this alone guarantees that professional ability combined with business acumen will be left undone to make this entertainment a success. We trust the public will give them the support they deserve. *** THE audience at the last Scottish Concert will remember the enthusiasm which greeted Miss Isabelle Langlands, the charming violinist. *** MR Finlay has been appointed to take charge of the Presbyterian Church work in Frankston and district. His first services will be conducted next Sunday as advertised. *** AS can be seen by our advertisement column, a Mission will be opened at the Catholic Church, Frankston, next Sunday morning. The sermons will be delivered by Father Hunt, the well known Redemptorist preacher. *** MR C. McKenzie was successful in pulling off the double (Handicap and Welter Handicap) at the Heathcote races on Tuesday, with his horse “Boothulla”, carrying 8st 11lbs in the former, and 10st in the latter. There were four starters in each event. The betting was 2 to 1 in the Handicap, and 5 to 4 in the Welter. *** WE are requested to call attention to an advertisement in another column to the effect that arrangements have been made provisionally to make a Sixth Presentation to Frankston Volunteers, on Wednesday, November 30th. We also have pleasure in making an earnest request to friends of recent Frankston volunteers to forward to the Hon. Sec., Dr Plowman, the names and exact camp, or other addresses of such recruits. The labours of the committee will be much lessened thereby. *** THE members of the W.C.T. Unionvisited the Langwarrin Camp on Thursday October 26th. In the absence of Captain Condor and Chaplin Gates, the party was met by the officers in command, also Mr Smith (organising secretary of the Y.M.C.A.). A service was held in the hospital ward by some of the members. Favorite hymns were sung at the request of the patients, who joined in the singing. Earnest words were spoken to the men, who listened attentively and a profitable time was spent for the Glory of God. An inspection was made of the various improvements going on at the Camp for the comfort of the officers and men, and the gardens look very trim and neat. An invitation to afternoon tea was grate-

fully accepted and much appreciated. A vote of thanks was passed to the officers, for their kind welcome to the members of the W.C.T.U. *** Frankston Court of Petty Sessions. Monday 20th November 1916 before Messrs C. G V Williams, W. J. Oates and C. W. Grant, Js.P. Inspector Britt charged Mrs B. M. Garrood, licensee of the Prince of Wales Hotel, with permitting persons on her premises after hour, and Messrs T. McComb, E. K McComb, F. Addicott, and H. Cottier with being on such premises after hours. Inspector Westcott appeared on behalf of Inspector Britt, who prosecuted and Mr Jones for the accused. A plea of not guilty was put in by all the parties concerned. Constable Ramsay deposed to visiting the hotel on the 14th of October at about ten minutes after ten o’clock, and found the defendants on the premises. To Mr Jones - There was no evidence of trading - I did not ask for the keys. For the defence, Mrs Garrood deposed that on the night the police visited the hotel she was in bed. Did not come down again that night. H. Garrood, husband of the licensee, remembered Constable Ramsay visiting the hotel on the night of the 14th October. E. McComb was in the house on the night in questions. He assisted in the bar when required, under a mutual agreement. There was no trading after hours that night. H. Cottier was also in the house, with the intention of playing billiards. T. McComb and F. Addicott were also in the parlor. I was talking to Ad about selling me some firewood and I also spoke to Cottier about wood. The constable then came in at eight minutes past ten. T. McComb was in the house on purpose to see his daughter (the licensee). There was no drink sold that night after hours. T. McComb deposed that he remembered the night in question. The reason that he was in the house that evening was to acquaint his daughter with the fact that her mother, who has been ill, was better. The bar parlor door was not locked. It might have been closed. Did not have a drink nor did anyone else. To Inspector Westcott -The door was so that a child could open it. It was not locked. F. Addicott deposed that he had gone to Garrood’s that evening to talk to him about purchasing firewood. Never had a drink after hours that night. The door leading into the bar parlor from the passage was wide open, and the window facing the street and the window looking into the billiard room was also open. To Inspector Westcott - When the constable came the door was open. H Garrood recalled- The door was open all the time we were there. All the doors leading into the house were open. Can get into the room from the outside when the door is snibbed. E. K. McComb sworn said - Was in the bar that evening till half past nine o’clock, There was no one served after hours that night. The bar parlor doer was wide open. Constable Ramsay, recalled - When I went to the hotel tried to get into the room, but could not, I heard voices, and I knocked. I swear the door was locked when I tried to get in. The Bench did not consider that a breech of the law had been committed and dismissed the case, with two guineas costs. *** From the pages of the Mornington Standard, 25 November, 1916