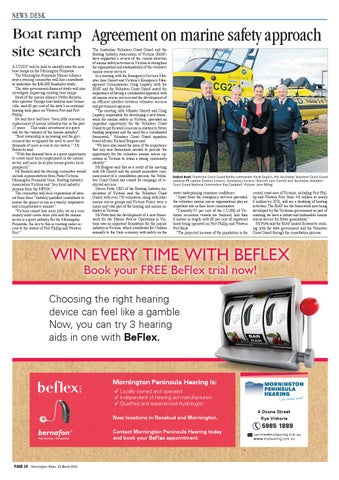 Boat ramp Agreement on marine safety approach site search A STUDY will be held to identify sites for new boat ramps on the Mornington Peninsula. The Mornington Peninsula Marine Alliance says a steering committee will hire consultants to undertake the $40,000 feasibility study. The state government-financed study will also investigate improving existing boat ramps. Head of the marine alliance Stefan Borzeki, who operates Yaringa boat harbour near Somerville, said 60 per cent of the state’s recreational boating took place on Western Port and Port Phillip. He said there had been “been little renewal or replacement of marine infrastructure in the past 25 years … This under investment is a grave risk for the viability of the marine industry”. “Boat ownership is increasing and the government has recognised the need to meet the demands of more access to our waters,”’ Mr Borzecki said. “With this demand there is a great opportunity to create more local employment in the marine sector, and more local jobs means greater local prosperity.” Mr Borzeki said the steering committee would include representatives from Parks Victoria, Mornington Peninsula Shire, Boating Industry Association Victoria and “key local industry persons from the MPMA”. The committee will seek expressions of interest from three “suitably qualified consultants to ensure the project is run in a timely, responsive and comprehensive manner”. “Victoria cannot lose more jobs, we as a community must create more jobs and the marine sector is a great industry for the Mornington Peninsula; the key to this is creating easier access to the waters of Port Phillip and Western Port.”

The Australian Volunteer Coast Guard and the Boating Industry Association of Victoria (BIAV) have supported a review of the current structure of marine safety activities in Victoria to strengthen the organisation and sustainability of the volunteer marine rescue services. In a meeting with the Emergency Services Minister Jane Garrett and Victoria’s Emergency Management Commissioner Craig Lapsley, both the BIAV and the Volunteer Coast Guard raised the importance of having a coordinated approach with all marine rescue services and the development of an efficient interface between volunteer services and government agencies. “The meeting with Minister Garrett and Craig Lapsley, responsible for developing a new framework for marine safety in Victoria, provided an important opportunity for the Volunteer Coast Guard to put forward concerns in relation to future funding programs and the need for a coordinated framework,” Volunteer Coast Guard squadron board advisor Richard Burgess said. “We have also raised the issue of the importance that any new framework needed to provide the opportunity for the volunteer marine rescue operation in Victoria to retain a strong community identity.” Mr Burgess said that as a result of the meeting with Mr Garrett and the almost immediate commencement of a consultation process, the Volunteer Coast Guard has ceased its campaign of restricted services. Steven Potts, CEO of the Boating Industry Association of Victoria said the Volunteer Coast Guard, with over 750 volunteers, along with other marine rescue groups and Victoria Police were a major and vital part of the boating and marine industry in Victoria. Mr Potts said the development of a new framework for the Marine Rescue Operations in Victoria was an important foundation for the marine industry in Victoria, which contributes $4.5 billion annually to the State economy with safety on the

water underpinning consumer confidence. “Apart from the emergency services provided, the volunteer marine rescue organisations play an important role in their local communities. “Currently 95 per cent of the 172,000 of Victorian recreation vessels are trailered, less than 8 metres in length with 68 per cent of registered boats being operated on Port Phillip and Western Port Bays. “The projected increase of the population in the

central coast area of Victoria, including Port Phillip and Western Port, from 4.6 million to nearly 8 million by 2050, will see a doubling of boating activities. The BIAV see the framework now being developed by the Victorian government as part of ensuring we have a robust and sustainable marine rescue service for future generations.” Mr Potts said the BIAV looked forward to working with the state government and the Volunteer Coast Guard through the consultation process.

Choosing the right hearing device can feel like a gamble. Now, you can try 3 hearing aids in one with BeFlex.