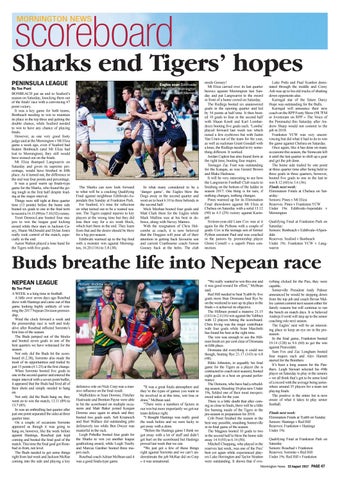 By Toe Punt BONBEACH put an end to Seaford’s season on Saturday, knocking them out of the finals’ race with a convincing 47 point victory. It was a key game for both teams, Bonbeach needing to win to maintain its place in the top three and getting the double chance, while Seaford needed to win to have any chance of playing finals. However, as one very good footy judge said at the Mornington v Mt Eliza game a week ago, even if Seaford had beaten Bonbeach (and Mt Eliza had lost to Mornington), they still would have missed out on the finals. Mt Eliza thumped Langwarrin on Saturday and given its supreme percentage, would have finished in fifth place. As it turned out, the difference in the end was four points and percentage. It was a good warm up finals-type game for the Sharks, who found the going tough in the first half despite leading at the major interval. Things were still tight at three quarter time (13 points) before the home side booted six goals to one in the final term to record a 14.15 (99) to 7.10 (52) victory. Trent Dennis-Lane booted four majors to win the league goal kicking award while their stars in Jackson Casey, Shane McDonald and Dylan Jones really took control of the match, especially in the end. Aaron Walton played a lone hand for the Tigers with five goals.

The Sharks can now look forward to what will be a cracking Qualifying Final against neighbour Edithvale-Aspendale this Sunday at Frankston Park. For Seaford, it’s time for reflection on what turned out to be a wasted season. The Tigers copped injuries to key players at the wrong time but they did lose their way for a six week block, which hurt them in the end. They learn from that and the desire should be there for a big pre-season. Edithvale warmed up to the big final with a monster win against Mornington, 16.20 (116) to 5.8 (38).

In what many considered to be a ‘danger game’, the Eagles blew the Dogs away in the second quarter and went on to boot 6.10 to three behinds in the second half. Mick Meehan booted four goals and Matt Clark three for the Eagles while Mark Mullins was at his best in defence, along with Stevey Mannix. With the resignation of Chris Holcombe as coach, it is now believed that the Doggies will pour all of their attention in getting back favourite son and current Cranbourne coach Simon Goosey back at the helm. The club

needs Goosey! Mt Eliza carried over its last quarter heroics against Mornington last Sunday and put Langwarrin to the sword in front of a home crowd on Saturday. The Redlegs booted six unanswered goals in the opening quarter and led by 54 points at half time. It then booted 10 goals to four in the second half with Shaun Knott and Karl Lombardozzi booting five goals each. ‘Lomba’ played forward last week too which raised a few eyebrows but with Justin Van Unen out of the team for the year, as well as ruckman Grant Goodall with a knee, the Redlegs needed to try something different. It worked. Jordan Capkin has also found form at the right time, booting four majors. Teenager Zac Foot was outstanding for the Kangas, as was Gerard Brown and Blake Harkness. It will be very interesting to see how the Langwarrin Football Club reacts to finishing on the bottom of the ladder in season 2017. One thing is for sure, if nothing changes, nothing changes. Pines warmed up for its Elimination Final showdown against Mt Eliza at Chelsea on Saturday with a solid 13.12 (90) to 4.5 (29) victory against Karingal. Sixteen-year-old Liam Cox was at it again for the Pythons with a couple of goals. Cox is the teenage son of former Python assistant Paul and was coached in the juniors by premiership player Glenn Cornell – a superb Pines connection.

Luke Potts and Paul Scanlon dominated through the middle and Corey Ash was up to his old trucks of shutting down opponents also. Karingal star of the future Darcy Hope was outstanding for the Bulls. Karingal will announce their new coach on the RPP Footy Show (98.7FM or livestream on RPP – The Voice of the Peninsula) this Saturday after Andrew Sharp would not commit to the job in 2018. Frankston YCW was very unconvincing but did what it had to do to win the game against Chelsea on Saturday. Once again, like it has done on many occasions this season, the Stonecats left it until the last quarter to shift up a gear and get the job done. The home side trailed by one point at three quarter time after being held to three goals in three quarters, however, booted five goals to one in the last to win 8.12 (60) to 5.6 (36). Finals next week: Elimination Finals at Chelsea on Saturday: Seniors: Pines v Mt Eliza Reserves: Pines v Frankston YCW Under 19s: Edithvale-Aspendale v Mornington Qualifying Final at Frankston Park on Saturday: Seniors: Bonbeach v Edithvale-ASpendale Reserves: Seaford v Bonbeach Under 19s: Frankston YCW v Langwarrin

Buds breathe life into Nepean race NEPEAN LEAGUE By Toe Punt A WEEK is a long time in football. A little over seven days ago Rosebud drew with Hastings and came out of that game looking highly unlikely of winning the 2017 Nepean Division premiership. Wind the clock forward a week and the premiership race is well and truly alive after Rosebud inflicted Sorrento’s first loss of the season. The Buds jumped out of the blocks and booted seven goals in one of the best quarters we have witnessed for the season. Not only did the Buds hit the scoreboard (6.2.38), Sorrento also made the most of its opportunities and trailed by just 13 points (4.1.25) at the first change. When Sorrento booted five goals to one in the second quarter and entered the major interval with a seven point buffer, it appeared that the Buds had fired all of their shots and simply needed to hang on. Not only did the Buds hang on, they went on to win the match, 13.11 (89) to 13.7 (85). In was an enthralling last quarter after just one point separated the sides at three quarter time. On a couple of occasions Sorrento appeared as though it was going to hang on, however, like the week before against Hastings, Rosebud just kept coming and booted the final goal of the match. This time the final goal got Rosebud in front, not level. The Buds needed to get some things right from last week and Jackson McRae coming into the side and playing a key

defensive role on Nick Corp was a massive influence on the final result. Midfielders in Sean Downie, Fletcher Hustwaite and Brenton Payne were able to hit the scoreboard on multiple occasions and Matt Baker joined Keegan Downie once again in attack and they booted two goals each. Seb Krumeich and Bart Wallace did outstanding jobs defensively too while Ben Dwyer was masterful in the ruck. Leigh Poholke booted four goals for the Sharks to win yet another league goalkicking award, while Leigh Treeby and Marcus Gardner booted three majors each. Rosebud coach Adrian McBean said it was a good finals-type game.

“It was a great finals atmosphere and they’re the types of games you want to be involved in at this time, win lose or draw,” McBean said. “There were a numbers of factors in our win but more importantly we got our team defence right. “I thought Hastings was really good the week before and we were lucky to get away with a draw. “Before the Hastings game I think we got away with a lot of stuff and didn’t get hurt on the scoreboard but Hastings proved last week that we can. “We just got a few of those things right against Sorrento and we can’t underestimate the job McRae did on Corp – it was sensational.

“We really wanted to win this one and it was good reward for effort,” McBean said. Red Hill needed to beat Tyabb by five goals more than Dromana beat Rye by on the weekend to sure up its place in the finals – it achieved its objective. The Hillmen posted a massive 21.15 (141) to 2.4 (16) win against the Yabbies with 12 players hitting the scoreboard. Chris Irving was the major contributor with four goals while Sean Marchetti has found his best at the right time. The win was enough to see the Hillmen finish six per cent clear of Dromana in fifth place. Dromana did everything it could too though, beating Rye 21.17 (143) to 6.8 (48). Rikki Johnston, in arguably his final game for the Tigers as a player (he is contracted to coach next season), booted eight goals in a best on ground performance. The Demons, who have had a rebuilding season, blooding 10-plus new Under 19s, fielded one of their most inexperienced sides for the year. There is a little doubt that after coming so close to finals, there will be a little fire burning inside of the Tigers in the pre-season in preparation for 2018. Crib Point finished the season in the best way possible, smashing Somerville in its final game of the season. The Magpies booted 10 goals to two in the second half to blow the home side away 14.9 (93) to 6.14 (50). Mitchell Chopping, who played in the reserves last week, was one of the Pies’ best yet again while experienced players Luke Herrington and Taylor Stratton were outstanding. It shows that if eve-

rything clicked for the Pies, they were capable. Somerville President Andy Palmer announced he would be stepping down from the top job and coach Bevan Malloy cannot commit next season either for family reasons but will continue to run the bench on match days. It is believed Andrejs Everitt will step up to the senior coaching role next season. The Eagles’ nest will be an interesting place to keep an eye on in the preseason. In the final game, Frankston booted 19.14 (128) to 9.6 (60) to get the win against Pearcedale. Sam Fox and Zac Longham booted four majors each and Alex Harnett starred for the Bombers. It’s been a long season for the Panthers. Leigh Stewart selected his 49th player on Saturday to play in the seniors – we all think that’s got to be some kind of a record with the average being somewhere around 35 players for a team not playing finals. The positive is the entire list is now aware of what it takes to play senior football. Finals next week: Elimination Finals at Tyabb on Sunday Seniors: Hastings v Red Hill Reserves: Frankston v Hastings Under 19s: Qualifying Final at Frankston Park on Saturday Seniors: Rosebud v Frankston Reserves: Sorrento v Red Hill Under 19s: Red Hill v Frankston