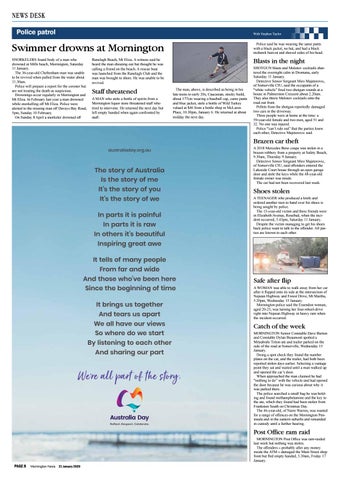 Police said he was wearing the same pants with a black jacket, no hat, and had a black mohawk haircut and shaved sides of his head.

SNORKELERS found body of a man who drowned at Mills beach, Mornington, Saturday 11 January. The 36-year-old Cheltenham man was unable to be revived when pulled from the water about 11.30am. Police will prepare a report for the coroner but are not treating the death as suspicious. Drownings occur regularly in Mornington and Mt Eliza. In February last year a man drowned while snorkelling off Mt Eliza. Police were alerted to the missing man off Daveys Bay Road, 5pm, Sunday 10 February. On Sunday 8 April a snorkeler drowned off

Blasts in the night

Ranelagh Beach, Mt Eliza. A witness said he heard the man shouting out but thought he was calling a friend on the beach. A rescue boat was launched from the Ranelagh Club and the man was brought to shore. He was unable to be revived.

Staff threatened A MAN who stole a bottle of spirits from a Mornington liquor store threatened staff who tried to intervene. He returned the next day but left empty handed when again confronted by staff.

The man, above, is described as being in his late teens to early 20s, Caucasian, stocky build, about 177cm wearing a baseball cap, camo pants and blue jacket, stole a bottle of Wild Turkey valued at $46 from a bottle shop in McLaren Place, 10.30pm, January 6. He returned at about midday the next day.

SHOTGUN blasts and Molotov cocktails shattered the overnight calm in Dromana, early Saturday 11 January. Detective Senior Sergeant Miro Majstorovic, of Somerville CIU, said the occupants of a “white vehicle” fired two shotgun rounds at a house in Palmerston Crescent about 2.20am. They also threw Molotov cocktails onto the road out front. Pellets from the shotgun reportedly damaged two cars in the driveway. Three people were at home at the time: a 59-year-old female and two men, aged 51 and 32. No one was injured. Police “can’t rule out” that the parties knew each other, Detective Majstorovic said.

A 2018 Mercedes Benz coupe was stolen in a brazen robbery from a property at Safety Beach, 9.30am, Thursday 9 January. Detective Senior Sergeant Miro Majstorovic, of Somerville CIU, said offenders entered the Lakeside Court house through an open garage door and stole the keys while the 48-year-old female owner was inside. The car had not been recovered last week.

Shoes stolen A TEENAGER who produced a knife and ordered another teen to hand over his shoes is being sought by police. The 15-year-old victim and three friends were in Elizabeth Avenue, Rosebud, when the incident occurred, 5.45pm, Saturday 11 January. Despite the victim managing to get his shoes back police want to talk to the offender. All parties are known to each other.

It tells of many people

By listening to each other And sharing our part

We’re all part of the story.

Safe after flip A WOMAN was able to walk away from her car after it flipped onto its side at the intersection of Nepean Highway and Forest Drive, Mt Martha, 5.20pm, Wednesday 15 January. Mornington police said the Essendon woman, aged 20-25, was turning her four-wheel-drive right into Nepean Highway in heavy rain when the incident occurred.

Catch of the week MORNINGTON Senior Constable Dave Burton and Constable Dylan Beaumont spotted a Mitsubishi Triton ute and trailer parked on the side of the road at Somerville, Wednesday 15 January. Doing a spot check they found the number plates on the car, and the trailer, had both been reported stolen days earlier. Selecting a vantage point they sat and waited until a man walked up and opened the car’s door. When approached the man claimed he had “nothing to do” with the vehicle and had opened the door because he was curious about why it was parked there. The police searched a small bag he was holding and found methamphetamine and the key to the ute, which they found had been stolen from Frankston South on Christmas Day. The 46-year-old, of Narre Warren, was wanted for a range of offences on the Mornington Peninsula and in the eastern suburbs and remanded in custody until a further hearing.

Post Office ram raid MORNINGTON Post Office was ram-raided last week but nothing was stolen. The offenders – probably after any money inside the ATM – damaged the Main Street shop front but fled empty handed, 5.30am, Friday 17 January.