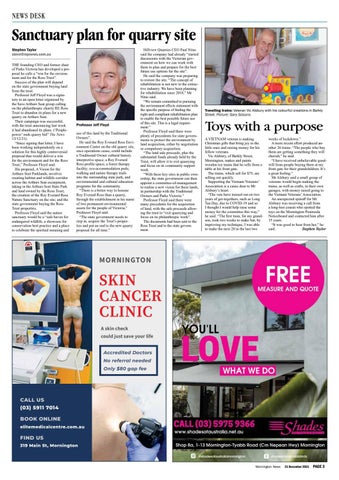 Sanctuary plan for quarry site Stephen Taylor steve@mpnews.com.au THE founding CEO and former chair of Parks Victoria has developed a proposal he calls a “win for the environment and for the Ross Trust”. Success of the plan will depend on the state government buying land from the trust. Professor Jeff Floyd was a signatory to an open letter organised by the Save Arthurs Seat group calling on the philanthropic charity RE Ross Trust to abandon its plans for a new quarry on Arthurs Seat. Their campaign was successful, with the trust announcing last week it had abandoned its plans. (‘Peoplepower’ ends quarry bid” The News 13/12/21). “Since signing that letter, I have been working independently on a solution for this highly controversial proposal that would deliver a win for the environment and for the Ross Trust,” Professor Floyd said. His proposal, A Vision for the Arthurs Seat Parklands, involves creating habitat and wildlife corridor across the Arthurs Seat escarpment, taking in the Arthurs Seat State Park and land owned by the Ross Trust; the creation of the Roy Everard Ross Nature Sanctuary on the site; and the state government buying the Ross Trust properties. Professor Floyd said the nature sanctuary would be a “safe haven for endangered wildlife, a showcase for conservation best practice and a place to celebrate the spiritual meaning and

Professor Jeff Floyd use of this land by the Traditional Owners”. He said the Roy Everard Ross Environment Centre on the old quarry site, once operations cease, could include a Traditional Owner cultural history interpretive space; a Roy Everard Ross profile space; a forest therapy facility; eco-accommodation pods; walking and nature therapy trails into the surrounding state park, and environmental and cultural education programs for the community. “There is a better way to honour Roy Everard Ross than a quarry, through the establishment in his name of two permanent environmental assets for the people of Victoria,” Professor Floyd said. “The state government needs to step in, acquire the Trust’s properties and put an end to the new quarry proposal for all time.”

Hillview Quarries CEO Paul Nitas said the company had already “started discussions with the Victorian government on how we can work with them to plan and prepare for the best future use options for the site”. He said the company was preparing to restore the site. “The concept of rehabilitation is not new to the extractive industry. We have been planning for rehabilitation since 2018,” Mr Nitas said. “We remain committed to pursuing the environment effects statement with the specific purpose of finding the right and compliant rehabilitation plan to enable the best possible future use of this site. This is a legal requirement.” Professor Floyd said there were plenty of precedents for state governments to protect the environment by land acquisition, either by negotiation or compulsory acquisition. “The land sale proceeds, plus the substantial funds already held by the Trust, will allow it to exit quarrying and focus on its community support work. “With these key sites in public ownership, the state government can then appoint a committee-of-management to realise a new vision for these lands, in partnership with the Traditional Owners and Parks Victoria.” Professor Floyd said there were many precedents for the acquisition of land, with the sale proceeds allowing the trust to “exit quarrying and focus on its philanthropic work”. The documents had been sent to the Ross Trust and to the state government.

Toys with a purpose A VIETNAM veteran is making Christmas gifts that bring joy to the little ones and raising money for his fellow veterans. Vic Alsbury, of Barkly Street, Mornington, makes and paints wooden toy trains that he sells from a table at his front gate. The trains, which sell for $75, are selling out quickly. Supporting the Vietnam Veterans’ Association is a cause dear to Mr Alsbury’s heart. “The vets have missed out on two years of get-togethers, such as Long Tan Day, due to COVID-19 and so I thought I would help raise some money for the committee this way,” he said. “The first train, for my grandson, took two weeks to make but, by improving my technique, I was able to make the next 20 in the last two

weeks of lockdown.” A more recent effort produced another 26 trains. “The people who buy them are getting something they will cherish,” he said. “I have received unbelievable goodwill from people buying them at my front gate for their grandchildren. It’s a great feeling.” Mr Alsbury said a small group of veterans would begin making the trains, as well as crafts, in their own garages, with money raised going to the Vietnam Veterans’ Association. An unexpected spinoff for Mr Alsbury was receiving a call from a long-lost cousin who spotted the toys on the Mornington Peninsula Noticeboard and contacted him after 15 years. “It was good to hear from her,” he said. Stephen Taylor