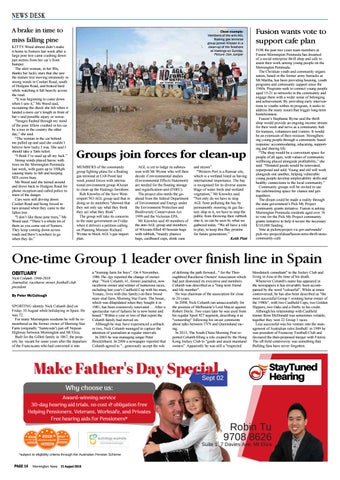 NEWS DESK A brake in time to miss falling pine KITTY Wood almost didn’t make it home to Somers last week after a large pine tree came crashing down just metres from her car’s front bumper. The alert woman, in her 80s, thanks her lucky stars that she saw the mature tree moving ominously in strong winds in Coolart Road, south of Hodgins Road, and braked hard while watching it fall heavily across the road. “It was beginning to come down when I saw it,” Ms Wood said, recounting the shock she felt when it landed a mere car’s length in front of her – and possible injury or worse. “Images flashed through my mind of the poor fellow crushed in his car by a tree in the country the other day,” she said. “The woman in the car behind me pulled up and said she couldn’t believe how lucky I was. She said I should take a Tatts ticket. “I think I’ve used up all my luck.” Strong winds played havoc with trees on the Mornington Peninsula last week, with gusts up to 100kph causing many to fall and keeping SES crews busy. Ms Wood said she turned around and drove back to Hodgins Road for phone reception and called police to warn of the danger. Cars were still driving down Coolart Road and being forced to turn around when they came to the fallen tree. “I don’t like these pine trees,” Ms Wood said. “There’s a whole lot of them as you come out of Somers. They keep coming down across roads and there’s nowhere to go when they do.”

Clean example: Members of the anti-AGL floating gas terminal group joined 4Ocean in a clean-up of the fireshore at Hastings on Sunday. Picture: Don Juniper

Groups join forces for clean-up MEMBERS of the community group fighting plans for a floating gas terminal at Crib Point last week joined forces with international environment group 4Ocean to clean up the Hastings foreshore. Rob Knowles of the Save Westernport NO AGL group said that in doing so its members “showed that they not only say what they think they act what they think”. The group will take its concerns to the state government on Friday when it delivers a petition calling on Planning Minister Richard Wynne to block AGL’s gas import plan.

AGL is yet to lodge its submission with Mr Wynne who will then decide if environmental studies (Environmental Effects Statement) are needed for the floating storage and regasification unit (FSRU). The project also needs the goahead from the federal Department of Environment and Energy under the Environment Protection and Biodiversity Conservation Act 1999 and the Victorian EPA. Mr Knowles said 40 members of the anti-AGL group and members of 4Oceans filled 40 hessian bags with rubbish, “mainly plastics bags, cardboard cups, drink cans

and straws”. “Western Port is a Ramsar site, which is a wetland listed as having international importance. The bay is recognised for its diverse assemblage of water birds and wetland vegetation,” Mr Knowles said. “Not only do we have to stop AGL from polluting the bay by permanently mooring its gas factory ship in it, we have to stop the public from throwing their rubbish into it, as can be seen by what we gathered today. “We all have a role to play, to keep this Bay pristine for future generations.” Keith Platt

Fusion wants vote to support cafe plan FOR the past two years team members at Fusion Mornington Peninsula has dreamed of a social enterprise thrift shop and cafe to assist their work among young people on the Mornington Peninsula. The Christian youth and community organisation, based in the former army barracks at Mt Martha, has been providing housing, youth programs and community support since the 1960s. Programs seek to connect young people aged 15-21 to networks in the community and engage them with a wider sense of belonging and achievement. By providing early interventions to youths within its program, it seeks to address the many issues that trigger long-term homelessness. Fusion‘s Stephanie Byrne said the thrift shop would provide an ongoing income stream for their work and serve as a community hub for trainees, volunteers and visitors. It would be an extension of their mission: Strengthening young people through a community based response: accommodating, educating, supporting and sharing life. “The shop would be a convenient space for people of all ages, with values of community wellbeing placed alongside profitability,” she said. “Donated goods would be renovated, repurposed and sold. Young and old will work alongside one another, helping vulnerable young people develop employability skills and healthy connections to the local community.” Community groups will be invited to use the cafe/meeting space for classes and gettogethers. The dream could be made a reality through the state government’s Pick My Project community grants initiative. Fusion is asking Mornington Peninsula residents aged over 16 to vote for the Pick My Project community grants initiative to help it secure the necessary $110,000 funding. Vote at pickmyproject.vic.gov.au/rounds/ pick-my-project/ideas/fusion-retro-thrift-storecommunity-cafe

Nick Columb, 1946-2018 Journalist, racehorse owner, football club president By Peter McCullough SPORTING identity Nick Columb died on Friday 10 August while holidaying in Spain. He was 72. For many Mornington residents he will be remembered as the former owner of Morning Star Farm (originally ‘Sunnyside') just off Nepean Highway between Mornington and Mt Eliza. Built for the Gillett family in 1867, the property lay vacant for some years after the departure of the Franciscans who had converted it into

a “training farm for boys”. On 4 November, 1986 The Age reported the change of ownership: "Nick Columb, 41, former journalist, now racehorse owner and winner of numerous races, including last year's Caulfield Cup with his mare, Tristarc, lives with (his family) on their brood mare stud farm, Morning Star Farm. The house, which was dilapidated when they bought it in 1981, has been extensively renovated … After a spectacular run of failures he is now home and hosed." Within a year or two of that report the Columb family had moved on. Although he may have experienced a setback or two, Nick Columb managed to capture the attention of journalists at regular intervals. In 2003 he was managing singer Peter Brocklehurst. In 2006 a newspaper reported that Columb agreed to "...generously accept the role

of defining the path forward..." for the Thoroughbred Racehorse Owners' Association which had just dismissed its executive and members. Columb was described as a "long term friend and life member”. He was chairman of the association for close to 20 years. In 2008, Nick Columb ran unsuccessfully for the position of Melbourne’s Lord Mayor against Robert Doyle. Two years later he was axed from his regular Sport 927 segment, describing it as “censorship” following his on-air comments about talks between TVN and Queensland racing. In 2013, The South China Morning Post reported Columb filling a role created by the Hong Kong Jockey Club to "guide and assist mainland owners”. Apparently he was still a "respected

bloodstock consultant" to the Jockey Club and living in Asia at the time of his death. Whenever Columb's name has appeared in the newspapers it has invariably been accompanied by the word “colourful”. While at times controversial, he has also been described as "the most successful Group 1 winning horse owner of the 1980s", with two Caulfield Cups, two Golden Slippers, two Oaks and a Derby to his credit. Although his relationship with Caulfield trainer Ross McDonald was sometimes volatile, together they won 22 Group 1 races. Less successful was his venture into the management of Australian rules football: in 1989 he was president of Footscray Football Club and favoured the then-proposed merger with Fitzroy. The off-field controversy was something that Bulldog fans have never forgotten.