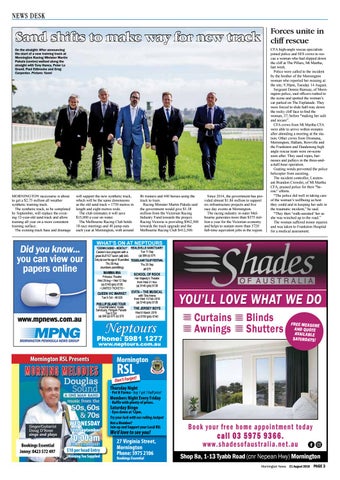 MORNINGTON racecourse is about to get a $2.75 million all weather synthetic training track. The synthetic track, to be completed by September, will replace the existing 12-year-old sand track and allow training all year on a more consistent training surface. The existing track base and drainage

86 trainers and 440 horses using the track to train. Racing Minister Martin Pakula said the government would give $1.38 million from the Victorian Racing Industry Fund towards the project. Racing Victoria is providing $962,500 towards the track upgrade and the Melbourne Racing Club $412,500.

will support the new synthetic track, which will be the same dimensions as the old sand track – 1730 metres in length and eight metres wide. The club estimates it will save $15,000 a year on water. The Melbourne Racing Club holds 18 race meetings and 40 jump outs each year at Mornington, with around

Since 2014, the government has provided almost $1.84 million to support six infrastructure projects and five race day events at Mornington. The racing industry in outer Melbourne generates more than $375 million a year for the Victorian economy and helps to sustain more than 3720 full-time equivalent jobs in the region.

CFA high-angle rescue specialists joined police and SES crews to rescue a woman who had slipped down the cliff at The Pillars, Mt Martha, last week. Police were called to the incident by the brother of the Mornington woman who reported her missing at the site, 9.30pm, Tuesday 14 August. Sergeant Dennis Ramsay, of Mornington police, said officers rushed to the scene and spotted the woman’s car parked on The Esplanade. They were forced to slide half-way down the rocky cliff face to find the woman, 37, before “making her safe and secure”. CFA crews from Mt Martha CFA were able to arrive within minutes after attending a meeting at the station. Other crews from Dromana, Mornington, Hallam, Rowville and the Frankston and Dandenong high angle rescue team were on-scene soon after. They used ropes, harnesses and pulleys in the three-anda-half-hour operation. Gusting winds prevented the police helicopter from assisting. The incident controller, Lieutenant Brandon Crowder, of Mt Martha CFA, praised police for their “heroic” efforts. “The police did well in taking care of the woman’s wellbeing as best they could and in keeping her safe in the traumatic incident,” he said. “They then ‘walk-assisted’ her as she was winched up to the road.” The woman suffered minor injuries and was taken to Frankston Hospital for a medical assessment.

- Raffle with plenty of prizes.

- Eyes down at 12pm. Try your luck with our rolling Jackpot Not a Member? Join up and Support your Local RSL