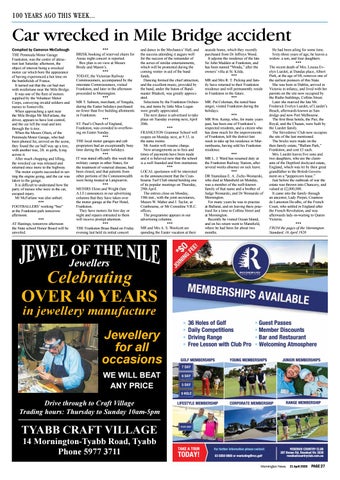 Car wrecked in Mile Bridge accident Compiled by Cameron McCullough THE Peninsula Motor Garage Frankston, was the centre of attraction last Saturday afternoon, the object of interest being a wrecked motor car which bore the appearance of having experienced a hot time on the battlefields of France. It turned out that the car had met with misfortune near the Mile Bridge. It was one of the fleet of motors supplied by the Volunteer Motor Corps, conveying invalid soldiers and nurses to Somerville. When approaching a spot near the Mile Bridge Mr McFarlane, the driver, appears to have lost control, and the car left the road and tore through the ti-tree. When the Messrs Olsen, of the Peninsula Motor Garage, who had been phoned for, arrived on the scene, they found the car half way up a tree, with another tree, 2ft. in girth, lying across it. After much chopping and lifting, the wrecked car was released and returned once more to the highway. The motor experts succeeded in setting the engine going, and the car was taken to the garage. It is difficult to understand how the party of nurses who were in the car, escaped injury. Mr McFarlane was also unhurt. *** FOOTBALLERS’ working “bee” at the Frankston park tomorrow afternoon. *** AT Hastings, tomorrow afternoon the State school Honor Board will be unveiled.

*** BRISK booking of reserved chairs for Anzac night concert is reported. Box plan is on view at Messrs Brody and Mason’s. *** TODAY, the Victorian Railway Commissioners, accompanied by the interstate Commissioners, visited Frankston, and later in the afternoon proceeded to Mornington. *** MR T. Salmon, merchant, of Tongala, during the Easter holidays purchased no fewer than five building allotments in Frankston. *** ST. Paul’s Church of England, Frankston, was crowded to overflowing on Easter Sunday. *** THE local motor garages and cab proprietors had an exceptionally busy time during the Easter holidays. *** IT was stated officially this week that military camps in other States, for the treatment of venereal disease, had been closed, and that patients from other portions of the Commonwealth were being treated at Langwarrin. *** MESSRS Ekins and Wright (late A.I.F.) announces in our advertising columns that they have taken over the motor garage at the Pier Hotel, Frankston. They have motors for hire day or night and repairs entrusted to them will receive prompt attention. *** THE Frankston Brass Band on Friday evening last held its initial concert

and dance in the Mechanics’ Hall, and the success attending it augurs well for the success of the remainder of the series of similar entertainments, which will be promoted during the coming winter in aid of the band funds. Dancing formed the chief attraction, and the excellent music, provided by the band, under the baton of Bandmaster Blaskett, was greatly appreciated. Selections by the Frankston Orchestra, and items by little Miss Logan were greatly appreciated. The next dance is advertised to take place on Tuesday evening next, April 20th. *** FRANKSTON Grammar School will reopen on Monday next, at 9.15. in the same rooms. Mr Austin will resume charge. New arrangements as to fees and times of payments have been made and it is believed now that the school is a well founded and firm institution. *** LOCAL sportsmen will be interested in the announcement that the Cranbourne Turf Club intend holding one of its popular meetings on Thursday, 29th April. The entries close on Monday, 19th inst., with the joint secretaries, Messrs W. Maher and J. Taylor, at Cranbourne, or Mr Considine V.R.C. offices. The programme appears in our advertising columns. *** MR and Mrs A. S. Woolcott are spending the Easter vacation at their

seaside home, which they recently purchased from Dr Jeffreys Wood. It adjoins the residence of the late Sir John Madden at Frankston, and has been named “Minda,” after the owners’ villa at St. Kilda. *** MR and Mrs R. T. Picking and family have returned to their Frankston residence and will permanently reside in Frankston in the future. *** MR. Pat Coleman, the noted base singer, visited Frankston during the holidays. *** MR Wm. Kemp, who, for many years past, has been one of Frankston’s respected residents, and a citizen who has done much for the improvements of Frankston, left the district last week to take up his residence in Murrumbeena, having sold his Frankston residence. *** MR L. J. Ward has resumed duty at the Frankston Railway Station, after several weeks absence on sick leave. *** DR Stanislaus E. A. Zichy-Woinarski, who died at Mansfield on Monday, was a member of the well-known family of that name and a brother of Judge Woinarski, and Dr Woinarski of Mornington. For many years he was in practise at Ballarat, and on leaving there practised for a time in Collins Street and at Mornington. Recently he visited Ocean Island, and on his return went to Mansfield, where he had been for about two months.

He had been ailing for some time. Sixty-three years of age, he leaves a widow. a son, and four daughters. *** The recent death of Mrs. Louisa Evelyn Liardet, at Dundas place, Albert Park, at the age of 68, removes one of the earliest pioneers of this State. She was born in Dublin, arrived in Victoria in infancy, and lived with her parents on the site now occupied by the Rialto buildings, Collins Street. Later she married the late Mr. Frederick Evelyn Liardet, of Liardet’s Beach, afterwards known as Sandridge and now Port Melbourne. The first three hotels, the Pier, the Royal, and the Chusan, were built by the Liardet family. The Stevedores’ Club now occupies the site of the last mentioned. The bricks were made on the then family estate, “Ballam Park,” Frankston, and cost £5 each. Mrs. Liardet leaves five sons and two daughters, who are the claimants of the Deptford dockyard estate, England, which was let by their great grandfather to the British Government on a “peppercorn lease.” Just before the outbreak of war the estate was thrown into Chancery, and valued at £2,000,000. It came into the family through an ancestor, Lady Perpet, Countess de Lamonon De-albe, of the French Court, who settled in England after the French Revolution, and was afterwards lady-in-waiting to Queen Victoria. *** FROM the pages of the Mornington Standard, 16 April 1920

Celebrating OVER 40 YEARS in jewellery manufacture

WE WILL BEAT ANY PRICE Drive through to Craft Village Trading hours: Thursday to Sunday 10am-5pm