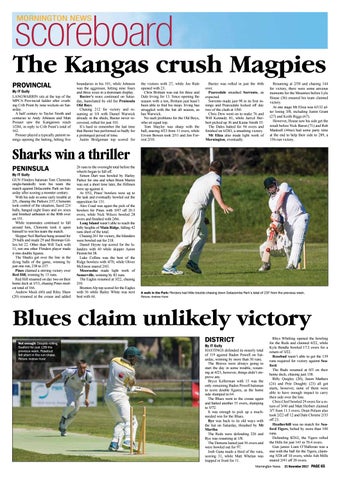 By IT Gully LANGWARRIN sits at the top of the MPCA Provincial ladder after crushing Crib Point by nine wickets on Saturday. A half century to Taylor Smith and centuries to Andy Johnson and Matt Prosser saw the Kangaroos reach 1/284, in reply to Crib Point’s total of 162. Prosser played a typically patient innings opening the batting, hitting five

boundaries in his 101, while Johnson was the aggressor, hitting nine fours and three sixes in a dominant display. Baxter’s woes continued on Saturday, humiliated by old foe Peninsula Old Boys. Chasing 212 for victory and resuming at 1/4 with Daniel Warwick already in the sheds, Baxter never recovered, rolled for just 101. It’s hard to remember the last time that Baxter has performed so badly for a prolonged period of time. Justin Bridgeman top scored for

the visitors with 27, while Joe Rule opened with 23. Chris Brittain was out for three and Dale Irving for 13. Since opening the season with a ton, Brittain just hasn’t been able to find his mojo. Irving has struggled with the bat all season, as has Warwick. No such problems for the Old Boys, who sit equal top. Tom Shayler was sharp with the ball, snaring 4/23 from 11 overs, while Eivion Bowen took 2/11 and Jon Forrest 2/10.

Baxter was rolled in just the 46th over. Pearcedale smashed Sorrento, as expected. Sorrento made just 98 in its first innings and Pearcedale kicked off day two of the clash at 1/60. Chris Dew went on to make 76 and Will Kennedy 81, while Jarryd Herbert picked up 36 and Kaine Smith 35. The Dales batted for 94 overs and finished on 6/283, a smashing victory. Mt Eliza also made light work of Mornington, eventually.

Resuming at 2/50 and chasing 144 for victory, there were some anxious moments for the Mounties before Lyle House (36) ensured his team claimed victory. At one stage Mt Eliza was 6/132 after losing 3/8, including Justin Grant (27) and Keith Biggs (67). However, House saw his side get the result before Nick Baron (71) and Rob Maskiell (44no) had some party time at the end to help their side to 289, a 150-run victory.

By IT Gully GUN Flinders batsman Tom Clements single-handedly won his team the match against Delacombe Park on Saturday after scoring a monster century. With his side in some early trouble at 2/5, chasing the Parkers 237, Clements took control of the situation, faced 224 balls, banged eight fours and six sixes and finished unbeaten in the 80th over on 151. While teammates continued to fall around him, Clements took it upon himself to win his team the match. Skipper Neil Barfuss hung around for 29 balls and made 29 and Brennan Gillies hit 22. Other than Will Tuck with 11, not one other Flinders player made it into double figures. The Sharks got over the line in the dying balls of the game, winning by just one run, 238 to 237. Pines claimed a stirring victory over Red Hill, winning by 15 runs. Red Hill resumed on day two on their home deck at 1/13, chasing Pines modest total of 166. Andrew Mock (60) and Riley Shaw (20) resumed at the crease and added

26 runs to the overnight total before the wheels began to fall off. Simon Dart was bowled by Harley Parker for one and when Brent Martin was out a short time later, the Hillmen were up against it. At 5/52, Pines’ bowlers were up to the task and eventually bowled out the opposition for 151. Alex Coad was again the pick of the bowlers for Pines with 5/47 off 20.3 overs, while Nick Wilcox bowled 28 overs and finished with 2/66. Long Island wasn’t able to reach the lofty heights of Main Ridge, falling 42 runs short of the total. Chasing 261 for victory, the Islanders were bowled out for 218. Daniel Heyne top scored for the Islanders with 40 while skipper Aaron Paxton hit 38. Luke Collins was the best of the Ridge bowlers with 4/70, while Oliver McEnroe snared 2/45. Moorooduc made light work of Somerville, winning by 82 runs. The Eagles resumed at 3/22, chasing 210. Brenton Alp top scored for the Eagles with 56 while Bailey White was next best with 44.

A walk in the Park: Flinders had little trouble chasing down Delacombe Park’s total of 237 from the previous week. Picture: Andrew Hurst

By IT Gully HASTINGS defended its miserly total of 119 against Baden Powell on Saturday, winning by more than 50 runs. The Braves were always going to start the day in some trouble, resuming at 4/23, however, things didn’t improve any. Bryce Kellerman with 15 was the only remaining Baden Powell batsman to score double figures, as the home side slumped to 64. The Blues went to the crease again and batted another 51 overs, slumping to 5/72. It was enough to pick up a muchneeded win for the Blues. Rye was back to its old ways with the bat on Saturday, thrashed by Mt Martha. The Reds were defending 226 and Rye was resuming at 1/8. The Demons lasted just 56 overs and were bowled out for 97. Josh Gana made a third of the runs, scoring 31, while Matt Whelan was trapped in front for 11.