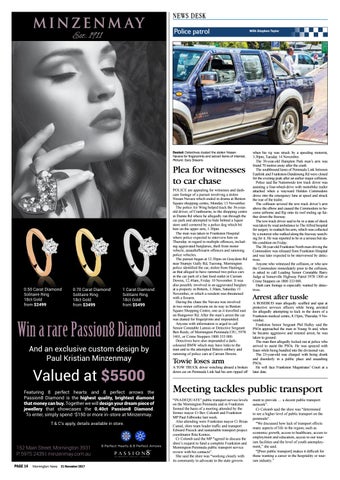 Plea for witnesses to car chase

POLICE are appealing for witnesses and dashcam footage of a pursuit involving a stolen Nissan Navara which ended in drama at Benton Square shopping centre, Monday 13 November. The police Air Wing helped track the 36-yearold driver, of Cranbourne, to the shopping centre in Dunns Rd where he allegedly ran through the car park and attempted to hide behind a liquor store until cornered by a police dog which bit him on the upper arm, 1.30pm. The man was taken to Frankston Hospital where police expected to interview him on Thursday in regard to multiple offences, including aggravated burglaries, theft from motor vehicle, assaults/firearm offences and ramming police vehicles. The pursuit began at 12.30pm on Graydens Rd near Stumpy Gully Rd, Tuerong. Mornington police identified the car, stolen from Hastings, as that alleged to have rammed two police cars in the car park of a fast food outlet in Carrum Downs, 12.40am, Friday 10 November. It was also possibly involved in an aggravated burglary at a property in Bittern, 3.30am, Saturday 11 November, in which a resident was threatened with a firearm. During the chase the Navara was involved in two minor collisions on its way to Benton Square Shopping Centre, one as it travelled east on Bungower Rd. After the man’s arrest the car was dusted for fingerprints and impounded. Anyone with information is urged to call Senior Constable Lamsis or Detective Sergeant Ben Reidy, of Mornington Peninsula CIU, 5978 1401, or Crime Stoppers 1800 333 000. Detectives have also impounded a darkcoloured BMW which may have links to the man and to the attempted Bittern robbery and ramming of police cars at Carrum Downs.

when his rig was struck by a speeding motorist, 3.30pm, Tuesday 14 November. The 30-year-old Hampton Park man’s arm was found 70 metres away after the crash. The southbound lanes of Peninsula Link between Eastlink and Frankston-Dandenong Rd were closed for the evening peak after an earlier major collision. Police said the Nationwide tow truck driver was assisting a four-wheel-drive with motorbike trailer attached when a wayward Holden Commodore drove into the emergency lane at speed and struck the rear of the trailer. The collision severed the tow truck driver’s arm above the elbow and caused the Commodore to become airborne and flip onto its roof ending up further down the freeway. The tow truck driver said to be in a state of shock was taken by road ambulance to The Alfred hospital for surgery to reattach his arm, which was collected by a motorist who walked along the freeway searching for it. He was reported to be in a serious but stable condition on Friday. The 38-year-old Frankston North man driving the Commodore was released from Frankston Hospital and was later expected to be interviewed by detectives. Anyone who witnessed the collision, or who saw the Commodore immediately prior to the collision, is asked to call Leading Senior Constable Barry Judge at Somerville Highway Patrol 5978 1300 or Crime Stoppers on 1800 333 000. Dash cam footage is especially wanted by detectives.

A ROSEBUD man allegedly scuffled and spat at protective services officers while being arrested for allegedly attempting to kick in the doors of a Frankston medical centre, 8.15pm, Thursday 9 November. Frankston Senior Sergeant Phil Hulley said the PSOs approached the man in Young St and, when he became aggressive and resisted arrest, he was taken to ground. The man then allegedly kicked out at police who arrived to assist the PSOs. He was sprayed with foam while being bundled into the divisional van. The 23-year-old was charged with being drunk and disorderly in a public place and assaulting PSOs. He will face Frankston Magistrates’ Court at a later date.

ment to provide … a decent public transport network”. Cr Colomb said the shire was “determined to see a higher level of public transport on the peninsula”. “We discussed how lack of transport effects many aspects of life in the region, such as economic growth, access to healthcare, access to employment and education, access to our tourism facilities and the level of youth unemployment,” she said. “[Poor public transport] makes it difficult for those wanting a career in the hospitality or tourism industry.”