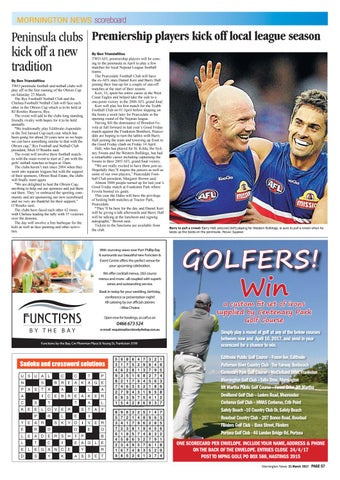 kick off a new tradition

By Ben Triandafillou TWO peninsula football and netball clubs will play off in the first running of the Obrien Cup on Saturday 25 March. The Rye Football/ Netball Club and the Chelsea Football/ Netball Club will face each other in the Obrien Cup which is to be held at RJ Rowley Reserve, Rye. The event will add to the clubs long standing friendly rivalry with hopes for it to be held annually. “We traditionally play Edithvale-Aspendale in the Ted Jarrard Cup each year which has been going for about 20 years now so we hope we can have something similar to that with the Obrien cup,” Rye Football and Netball Club president, Mick O’Rourke said. The event will involve three football matches with the main event to start at 2 pm with the girls’ netball matches to begin at 10am. The clubs haven’t met since 2004 when they went into separate leagues but with the support of their sponsors, Obrien Real Estate, the clubs will finally meet again. “We are delighted to host the Obrien Cup, anything to help out our sponsors and put them out there. They’ve embraced the sporting community and are sponsoring our new scoreboard and we very are thankful for their support,” O’Rourke said. The clubs have faced each other 62 times with Chelsea leading the tally with 37 victories over the demons. The day will involve a free barbeque for the kids as well as face painting and other activities.

By Ben Triandafillou TWO AFL premiership players will be coming to the peninsula in April to play a few matches for local Nepean League football teams. The Pearcedale Football Club will have the ex-AFL stars Daniel Kerr and Barry Hall joining their line-up for a couple of one-off matches at the start of their season. Kerr, 33, spent his entire career at the West Coast Eagles and helped take the side to a one-point victory in the 2006 AFL grand final. Kerr will play his first match for the Tyabb Football Club on 01 April before slipping on the boots a week later for Pearcedale in the opening round of the Nepean league. Having felt the dominance of Brendon Fevola at full forward in last year’s Good Friday match against the Frankston Bombers, Pearcedale are hoping to turn the tables with Barry Hall joining the team and towering up front in the Good Friday clash on Friday 14 April. Hall, who has played for St. Kilda, the Sydney Swans and the Western Bulldogs, has had a remarkable career including captaining the Swans to their 2005 AFL grand final victory. “We are really excited to have them join us. Hopefully they’ll inspire the juniors as well as some of our own players,” Pearcedale Football Club president, Margaret Brown said. Almost 5000 people turned up for last year’s Good Friday match at Frankston Park where Fevola booted six goals. This year the Dales will have the privilege of hosting both matches at Tractor Park, Pearcedale. “They’ll be here for the day and Daniel Kerr will be giving a talk afterwards and Barry Hall will be talking at the luncheon and signing autographs,” Brown said. Tickets to the functions are available from the club.

Barry to pull a crowd: Barry Hall, pictured (left) playing for Western Bulldogs, is sure to pull a crowd when he laces up the boots on the peninsula. Picture: Supplied

Book in today for your wedding, birthday, conference or presentation night! All catering by our official caterers - Wise Choice. Open now for bookings, so call us on

We offer cocktail menus, 2&3 course menus and more - all coupled with superb wines and outstanding service.