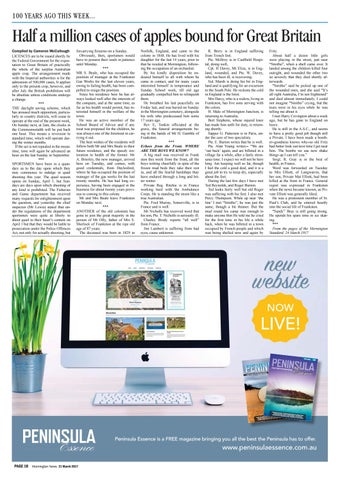 Half a million cases of apples bound for Great Britain Compiled by Cameron McCullough LICENCES are to be issued shortly by the Federal Government for the exportation to Great Britain of practically the whole of the surplus Australian apple crop. The arrangemnent made with the Imperial authorities is for the admission of 500,000 cases, It applies only to the present crop, however, and after July the British prohibition will be absolute unless conditions undergo a change. *** THE daylight saving scheme, which has aroused much opposition, particularly in country districts, will cease to operate at the end of the present week, On Sunday next, at 2am, the clocks in the Commonwetalth will be put back one hour. This means a reversion to standard time, which will operate during the winter months. If the act is not repealed in the meantime, time will again be advanced an hour on the last Sunday in September. *** SPORTSMEN have been in a quandary as to the day upon which they may commence to indulge in quail shooting this year. The quail season opens on Sunday, April 1. but Sundays are days upon which shooting of any kind is prohibited. The Fisheries and Game department has received many requests for enlightenment upon the question, and yesterday the chief inspector (Mr Lewis) stated that under the regulations of the department sportsmen were quite at liberty to shoot quail to their heart’s content on April 1 but that they would be liable to prosecution under the Police Offences Act, not only for actually shooting, but

forcarrying firearms on a Sunday. Obviously, then, sportsmen would have to possess their souls in patience until Monday. *** MR S. Beale, who has occupied the position of manager at the Frankston Gas Works for the last eleven years, owing to failing health, has been compelled to resign the position. Since his residence here he has always looked well after the interests of the company, and at the same time, as far as his health would permit, has interested himself in the welfare of the town. He was an active member of the School Board of Advice and if any treat was proposed for the children, he was always one of the foremost in carrying it out. The best wishes of the residents will follow both Mr and Mrs Beale to their future residence, and the speedy restoration to health of the former. Mr A. Brierley, the new manager, arrived here on Tuesday, and comes, with good credentials, from Daylesford, where he has occupied the position of manager of the gas works for the last twenty months. He has had long experience, having been engaged in the business for about twenty years previous to coming to this colony. Mr and Mrs Beale leave Frankston on Monday next. *** ANOTHER of the old colonists has gone to join the great majority in the person of Mr Olly, father of Mrs S. Sherlock of Frankston at the ripe old age of 87 years. The deceased was born in 1829 in

Norfolk, England, and came to the colony in 1848. He has lived with his daughter for the last 14 years, prior to that he resided at Mornington, following the occupation of an orchardist. By his kindly disposition he endeared himself to all with whom he came in contact, and for many years interested himself in temperance and Sunday School work, till old age gradually compelled him to relinguish them. He breathed his last peacefully on Friday last, and was buried on Sunday in the Mornington cemetery, alongside his wife who predeceased him some 17 years ago. Rev E, Tonkin officiated at the grave, the funeral arrangements being in the hands of Mr H. Gamble of Frankston. *** Echoes from the Front. WHERE ARE THE BOYS WE KNOW? A big mail was received in Frank ston this week from the front, all the boys writing cheerfully in spite of the frozen mud beds they take their rest in, and all the fearful hardships thay have endured through a long and bitter winter. Private Reg. Ritchie is in France working hard with the Ambulance Corps. He is standing the strain like a true Australian. Pte. Fred Murray, Somerville, is in France and is well. Mr Nicholls has received word that his son, Pte. T. Nicholls is seriously ill. Charley Brody reports “all well” from France. Jim Lambert is suffering from bad eyes, cause unknown.

Fritz. About half a dozen little girls were playing in the street, just near “Smitho”, when a shell came over. It landed among the children killed four outright, and wounded the other two so severely that they died shortly afterwards. “Smitho” said he picked up one of the wounded ones, and she said “It’s all right Australia, I’m not frightened” and died almost immediately. I could not imagine “Smitho” crying, but the tears were in his eyes while he was telling me about it. I met Harry Covington about a week ago, but he has gone to England on leave. He is still in the A.S.C., and seems to have a pretty good job though still a Private. I have been made a bomber–goodness knows why–so old Fritz had better look out next time I get near him. The bombs we use now shake things up I can tell you.” Sergt. R. Gray is in the best of health, in France. Word was forwarded on Tuesday to Mrs Elliott, of Langwarrin, that her son, Private Mat Elliott, had been killed at the front in France. General regret was expressad in Frankston when the news became known, as Private Elliott was generally liked. He was a prominent member of St. Paul’s Club, and he entered heartly into the social life of Frankston. “Sandy” Bray is still going strong. He spends his spare time in ice skating. *** From the pages of the Mornington Standard, 24 March 1917

R. Berry is in England suffering from Trench feet. Pte. McIlroy is in Caulfield Hospital, doing well, Cpt. H Davey, Mt Eliza, is in England, wounded, and Pte. W. Davey, who has been ill, is recovering. Sid. Marsh is doing his bit in England and is qualifying for an excursion to the South Pole. He reckons the cold in England is the limit. Mrs Darcy, who is a widow, living in Frankston, has five sons serving with the colors. H. Male of Mornington Junction, is returning to Australia. Bert Stephens, whose injured knee has made him unfit for duty, is returning shortly. Sapper G. Patterson is in Paris, under the care of two specialists. Pte. E. Burton writes that he is well. Pte. Alan Young writes:– “We are ‘out back’ again, and are billeted in a village far a while, after a fairly strenuous time. I expect we will not be here long. Am keeping well so far, though I feel the cold a good deal, and it is a great job to try to keep dry, especially about the feet. During the last few days I have met Ted Reynolds, and Roger Burton. Ted looks fairly well but old Roger was suffering with his feet. I also met Percy Thompson. While up near ‘the line’ I met “Smitho”; he was just the same, though a bit thinner. But the mud round his camp was enough to make anyone thin He told me he cried for the first time in his life a while back, when he was billeted in a town occupied by French people and which was being shelled now and again by

Peninsula Essence is a FREE magazine bringing you all the best the Peninsula has to offer.