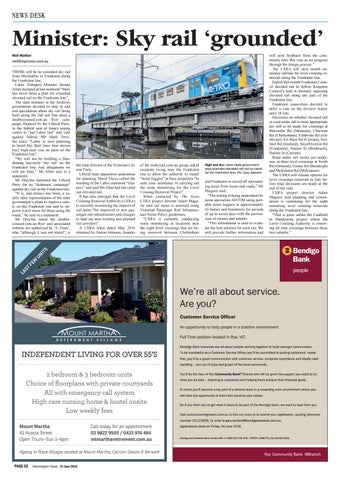 the state director of the Victorian Liberal Party. Liberal state opposition spokesman for planning David Davis called the wording of the Labor statement â&#x20AC;&#x153;slipperyâ&#x20AC;? and said Ms Allan had not ruled out elevated rail. It has also emerged that the Level Crossing Removal Authority (LXRA) is currently monitoring the impacts of rail noise â&#x20AC;&#x153;for improved or new passenger rail infrastructure and changes to land use near existing and planned rail corridorsâ&#x20AC;?. A LXRA letter dated May 2016 obtained by Simon Johnson, founder

of the noskyrail.com.au group, asked residents living near the Frankston line to allow the authority to install â&#x20AC;&#x153;noise loggersâ&#x20AC;? at their properties â&#x20AC;&#x153;to seek your assistance in carrying out the noise monitoring for the Level Crossing Removal Projectâ&#x20AC;?. When contacted by The News LXRA project director Adam Maguire said rail noise is assessed using Victorian Passenger Rail Infrastructure Noise Policy guidelines. â&#x20AC;&#x153;LXRA is currently conducting noise monitoring at locations near the eight level crossings that are being removed between Cheltenham

and Frankston to record all surrounding noise from trains and roads,â&#x20AC;? Mr Maguire said. â&#x20AC;&#x153;The testing is being undertaken by noise specialists AECOM using portable noise loggers at approximately 45 homes and businesses for periods of up to seven days with the permission of owners and tenants. â&#x20AC;&#x153;This information is used to evaluate the best solution for each site. We will provide further information and

will seek feedback from the community later this year as we progress through the design process.â&#x20AC;? The LXRA will next month announce options for level crossing removals along the Frankston line. Earlier this month Frankston Council decided not to follow Kingston Councilâ&#x20AC;&#x2122;s lead in formally opposing elevated rail along any part of the Frankston line. Frankston councillors decided to defer a vote on the divisive matter until 18 July. Decisions on whether elevated rail or road under rail is more appropriate are still to be made for crossings at Balcombe Rd (Mentone), Charman Rd (Cheltenham), Edithvale Rd (Edithvale), Eel Race Rd (Carrum), Seaford Rd (Seaford), Skye/Overton Rd (Frankston), Station St (Bonbeach), Station St (Carrum). Road under rail works are underway at three level crossings at North Rd (Ormond), Centre Rd (Bentleigh) and McKinnon Rd (McKinnon). The LXRA will release options for level crossings removals in July before final decisions are made at the end of the year. LXRA project director Adam Maguire said planning and consultation is continuing for the eight remaining level crossing removals along the Frankston line. â&#x20AC;&#x153;This is quite unlike the Caulfield to Dandenong project where the Level Crossing Authority is removing all nine crossings between these two suburbs.â&#x20AC;?

:HÂˇUHDOODERXWVHUYLFH Are you? &XVWRPHU6HUYLFH2IĂ&#x20AC;FHU An opportunity to help people in a positive environment Full Time position located in Rye, VIC Bendigo Bank branches are all about people working together to build stronger communities.