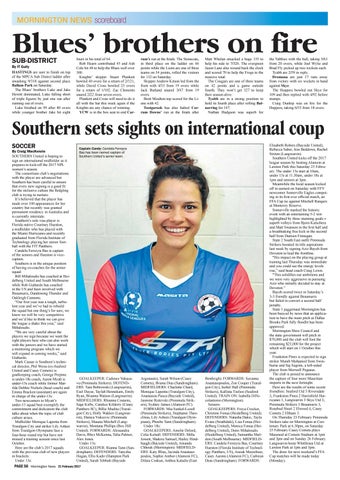 By IT Gully HASTINGS are sure to finish on top of the MPCA Sub Distrct ladder after smashing 9/318 against second place Ballam Park on Saturday. The Blues’ brothers Luke and Jake Hewitt dominated, Luke falling short of triple figures by just one run after running out of overs. Luke finished on 99 after 80 overs while younger brother Jake hit eight

fours in his total of 64. Rob Hearn contributed 45 and Ash Cole hit 48 to help the Blues well over 300. Knights’ skipper Stuart Plunkett bowled 40 overs for a return of 2/121, while David Cross bowled 25 overs for a return of 1/102. Zac Clements snared 2/22 from seven overs. Plunkett and Cross will need to do it all with the bat this week again if the Knights are any chance of winning. YCW is in the box seat to end Car-

rum’s run at the finals. The Stonecats, in third place on the ladder on 66 points while the Lions are one of three teams on 54 points, rolled the visitors for 132 on Saturday. Skipper Andrew Kitson led from the front with 4/33 from 19 overs while Jack Butland snared 3/47 from 19 overs. Brett Moulton top scored for the Lions with 42. Tootgarook has also halted Carrum Downs’ run at the finals after

Matt Whelan smacked a huge 155 to help his side to 7/326. The evergreen Jason Lane also wound back the clock and scored 70 to help the Frogs to the massive total. The Cougars are one of three teams on 42 points and a game outside fourth. They won’t get 327 to keep their season alive. Tyabb are in a strong position to hold its fourth place after rolling Balnarring for 147. Nathan Hudgson was superb for

the Yabbies with the ball, taking 5/61 from 20 overs, while Joel Wylie and Brad Fly picked up two wickets each. Tyabb are 2/59 in reply. Dromana are just 17 runs away from victory with six wickets in hand against Skye. The Hoppers bowled out Skye for 109 and then replied with 4/92 before stumps. Craig Dunlop was on fire for the Hoppers, taking 6/33 from 18 overs.

By Craig MacKenzie SOUTHERN United is hoping to sign an international midfielder as it prepares to kick-off the 2017 NPL women’s season. The consortium club’s negotiations with the player are advanced but Southern has been careful to ensure that every new signing is a good fit for the inclusive culture the fledgling club is trying to nurture. It’s believed that the player has made over 100 appearances for her country but recently was granted permanent residency in Australia and is currently interstate. Southern’s sole visa player is Florida native Courtney Hueston, a midfielder who has played with the Miami Hurricanes and recently graduated from Florida Institute of Technology playing her senior football with the FIT Panthers. Candela Ferreyra Bas is captain of the seniors and Hueston is vicecaptain. Southern is in the unique position of having co-coaches for the senior squad. Bill Mihaloudis has coached at Heidelberg United and South Melbourne while Rob Giabardo has coached in the US and been involved with Beaumaris, Dandenong Thunder and Oakleigh Cannons. “Our first year was a tough, turbulent year and we’ve had to rebuild the squad but one thing’s for sure, we know we will be very competitive and we’d like to think we can give the league a shake this year,” said Mihaloudis. “We are very careful about the players we sign because we want the right players here who can also work with the juniors and we have started a mentoring program which we will expand in coming weeks,” said Giabardo. Mark Cassar is Southern’s technical director, Phil Weiss (ex-Seaford United and Casey Comets) is goalkeeping coach, George Perpina is under-18s coach, Aaron Myatt is under-15s coach while former Matilda Debbie Nichols (head coach) and Emma Bracken (assistant) are again in charge of the under-13s. Two newcomers to Myatt’s under-15 squad best exemplify the commitment and dedication the club talks about when the topic of club culture arises. Midfielder Monique Lapenta from Traralgon City and striker Lily Aitken from Traralgon Olympians face a four-hour round trip but have not missed a training session since last October. Here are the club’s 2017 squads with the previous club of new players in brackets: Under 13s:

Elisabeth Robers (Bayside United), Rebecca Saber, Jess Beddows, Rachel Stirton (Langwarrin). Southern United kicks off the 2017 league season by hosting Alamein at Lawton Park this Saturday 25 February. The under 13s start at 10am, under 15s at 11.30am, under 18s at 1pm and seniors at 3pm. Meanwhile the local season kicked off in earnest on Saturday with FFV newcomer Somerville Eagles competing in its first ever official match, an FFA Cup tie against Mitchell Rangers at Monterey Reserve. Somerville marked the historic event with an entertaining 5-2 win highlighted by three stunning goals – superb volleys from Bjorn Kutschera and Matt Swanson in the first half and a breathtaking free kick in the second half from Damien Finnegan. State 2 South East outfit Peninsula Strikers boosted its title aspirations last week by signing Aziz Bayeh from Doveton to lead the frontline. “His impact on the playing group at training last Thursday was immediate and you could see the energy levels rise,” said head coach Craig Lewis. “This solidifies our ambitions and we were very aggressive in pursuing Aziz who initially decided to stay at Doveton.” Bayeh scored twice in Saturday’s 3-3 friendly against Beaumaris but failed to convert a second half penalty. State 1 juggernaut Mornington has been buoyed by news that an application to have the main pitch at Dallas Brooks Park fully floodlit has been approved. Mornington Shire Council and the state government will pitch in $70,000 and the club will foot the remaining $25,000 for the project which will start on 1 October this year. Frankston Pines is expected to sign striker Munib Mohamed from Swinburne and Saj Sugrim, a left-sided player from Morwell Pegasus. The club is poised to announce the capture of four more Mauritian imports in the next fortnight. Here are the results of some recent friendlies: Seaford Utd 5 Riversdale 3, Frankston Pines 2 Harrisfield Hurricanes 1, Langwarrin 3 Skye Utd 3, Peninsula Strikers 3 Beaumaris 3, Rosebud Heart 2 Elwood 4, Casey Comets 2 Eltham 3. On Thursday 23 February Peninsula Strikers take on Mornington at Centenary Park at 6.30pm, on Saturday 25 February Casey Comets plays Mazenod at Comets Stadium at 1pm and 3pm and on Sunday 26 February Langwarrin hosts Whittlesea Utd at Lawton Park at 1pm and 3pm. The draw for next weekend’s FFA Cup matches will be made today (Monday).