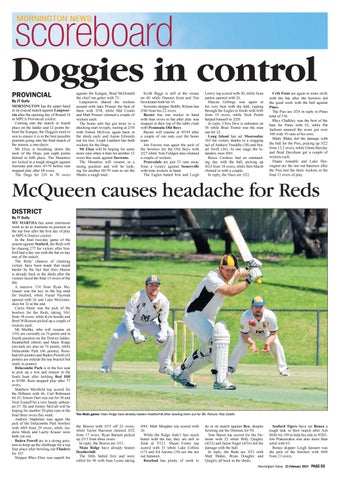 Doggies in control PROVINCIAL By IT Gully MORNINGTON has the upper hand in its crucial match against Langwarrin after the opening day of Round 10 in MPCA Provincial cricket. Coming into the match in fourth place on the ladder and 12 points behind the Kangas, the Doggies need to win to ensure it is in the best possible position going into the final match of the season, a one-dayer. Mt Eliza is breathing down the neck of the Dogs, just eight points behind in fifth place. The Mounties are locked in a tough struggle against Sorrento and were 4/174 before rain stopped play after 68 overs. The Dogs hit 210 in 70 overs

against the Kangas, Brad McDonald the chief run getter with 73. Langwarrin shared the wickets around with Jake Prosser the best of them with 3/38, while Mal Coutts and Matt Prosser claimed a couple of wickets each. The home side has got away to a shocking start in reply, reeling at 2/10 with Simon McEvoy again back in the sheds early and Aaron Edwards out for two. Leigh Lambert has both wickets for the Dogs. Mt Eliza will be hoping for some more runs when it bats for another 12 overs this week against Sorrento. The Mounties will resume in a strong position and will be looking for another 60-70 runs to set the Sharks a tough total.

Keith Biggs is still at the crease on 40 while Damien Kent and Tim Strickland both hit 35. Sorrento skipper Bobby Wilson has 2/46 from his 22 overs. Baxter has one wicket in hand with four overs to bat after play was stopped in their top of the table clash with Peninsula Old Boys. Baxter will resume at 9/194 after a couple of run outs cost the home team. Jon Forrest was again the pick of the bowlers for the Old Boys with 2/27 while Tom Feldgen also claimed a couple of wickets. Pearcedale are just 33 runs away from a victory against Somerville with nine wickets in hand. The Eagles batted first and Leigh

Lowry top scored with 30, while Sean parker opened with 26. Shayne Gillings was again at his very best with the ball, ripping through the Eagles to finish with 6/46 from 19 overs, while Nick Pettitt helped himself to 2/20. In reply, Chris Dew is unbeaten on 56 while Brad Trotter was the man out for 22. Long Island has set Moorooduc 165 for victory thanks to a wagging tail of Andrew Tweddle (38) and Stuart Swift (36). At one stage the Islanders were 6/65. Reece Cordeux had an outstanding day with the ball, picking up 4/24 from 18 overs, while Ben Marsh chimed in with a couple. In reply, the Ducs are 1/22.

Crib Point are again in some strife with the bat after the bowlers did the good work with the ball against Pines. The Pies are 3/24 in reply to Pines total of 136. Rhys Chalkley was the best of the bats for Pines with 52, while Pat Jackson ensured the score got over 100 with 19 runs of his own. Matty Blake did the damage with the ball for the Pies, picking up 5/22 from 13.2 overs, while Glenn Barclay and Brad Davidson got a couple of wickets each. Duane Annable and Luke Herrington are the not out batsmen after the Pies lost the three wickets in the final 12 overs of play.

McQueen causes headache for Reds DISTRICT By IT Gully MT MARTHA has some enormous work to do to maintain its position in the top four after the first day of play in MPCA District cricket. In the final two-day game of the season against Seaford, the Reds will be chasing 277 for victory after Seaford had a day out with the bat on day one of the match. The Redsâ&#x20AC;&#x2122; chances of claiming victory have been made that much harder by the fact that Alex Mason is already back in the sheds after the visitors faced the final 13 overs of the day. A massive 154 from Ryan McQueen was the key to the big total for Seaford, while Faisal Payenda opened with 26 and Luke McGennisken hit 32 at the end. Curtis Stone was the pick of the bowlers for the Reds, taking 5/61 from 18 overs, while Kyle bendle and Brett Wilkinson picked up a couple of wickets each. Mt Martha, who will resume on 1/10, are currently on 74 points and in fourth position on the District ladder. Heatherhill (third) and Main Ridge (second) are also on 74 points, while Delacombe Park (66 points), Rosebud (66 points) and Baden Powell (62 points) are outside the top bracket but ready to pounce. Delacombe Park is in the box seat to pick up a win and remain in the finals hunt after holding Red Hill to 9/180. Rain stopped play after 77 overs. Matthew Merifield top scored for the Hillmen with 46, Carl Robinson hit 45, Simon Dart was out for 30 and Nick Esipoff hit a very handy unbeaten 27. He and Jimmy McCall will be hoping for another 20-plus runs in the final three overs this week. Andrew Stapleton was again the pick of the Delacombe Park bowlers with 4/69 from 29 overs, while Andrew Mock and Lachy Klauer were both run out. Baden Powell are in a strong position to keep up the challenge for a top four place after bowling out Flinders for 107. Skipper Rhys Elmi was superb for

The Main game: Main Ridge have already beaten Heatherhill after bowling them out for 96. Picture: Rab Siddhi

the Braves with 3/15 off 22 overs, while Taylor Harrison claimed 3/32 from 17 overs. Ryan Barnett picked up 2/13 from three overs. In reply, the Braves are 1/11. Main Ridge have already beaten Heatherhill. The Hills batted first and were rolled for 96 with Sam Lyons taking

do in its match against Rye, despite bowling out the Demons for 94. Tom Baron top scored for the Demons with 22 while Billy Quigley (4/23) and Jason Nagel (4/16) did the damage with the ball. In reply, the Buds are 3/23 with Matt Maher, Brian Doughty and Quigley all back in the sheds.

Seaford Tigers have set Boneo a tough task in their match after Ash Mills hit 109 to help his side to 9/265. Jon Plakourakis was also more than solid with 63. Boneo skipper Leigh Janssen was the pick of the bowlers with 4/60 from 23 overs.