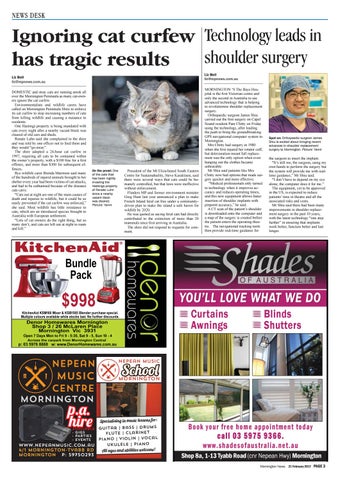 Liz Bell liz@mpnews.com.au DOMESTIC and stray cats are running amok all over the Mornington Peninsula as many cat-owners ignore the cat curfew. Environmentalists and wildlife carers have called on Mornington Peninsula Shire to enforce its cat curfew to stop increasing numbers of cats from killing wildlife and causing a nuisance to residents. One Hastings property is being inundated with cats every night after a nearby vacant block was cleared of old cars and sheds. Renate Luhn said she complained to the shire and was told by one officer not to feed them and they would “go away”. The shire adopted a 24-hour cat curfew in 1997, requiring all cats to be contained within the owner’s property, with a $100 fine for a first offence, and more than $300 for subsequent offences. Rye wildlife carer Brenda Marmion said many of the hundreds of injured animals brought to her shelter every year had been victims of cat attacks, and had to be euthanised because of the diseases cats carry. “Cats out at night are one of the main causes of death and injuries to wildlife, but it could be so easily prevented if the cat curfew was enforced,” she said. Most wildlife has little resistance to cats, which are an introduced species brought to Australia with European settlement. “Lots of cat owners do the right thing, but so many don’t, and cats are left out at night to roam and kill.”

On the prowl: One of the cats that has been nightly invading the Hastings property of Renate Luhn since a nearby vacant block was cleared. Picture: Yanni

President of the Mt Eliza-based South Eastern Centre for Sustainabaility, Steve Karaktisos, said there were several ways that cats could be humanely controlled, but that laws were ineffective without enforcement. Flinders MP and former environment minister Greg Hunt last year announced a plan to make French Island feral cat free under a communitydriven plan to make the island a safe haven for wildlife by 2020. He was quoted as saying feral cats had directly contributed to the extinction of more than 20 mammals since first arriving in Australia. The shire did not respond to requests for comment.

MORNINGTON ‘S The Bays Hospital is the first Victorian centre and only the second in Australia to use advanced technology that is helping to revolutionise shoulder replacement surgery. Orthopaedic surgeon James Shiu carried out the first surgery on Capel Sound resident Pam Chitty on Friday using the technology, after leading the push to bring the groundbreaking GPS navigational computer system to Mornington. Mrs Chitty had surgery in 1980 when she first injured her rotator cuff, but deterioration meant full replacement was the only option when even hanging out the clothes became unbearable. Mr Shiu said patients like Mrs Chitty now had options that made surgery quicker and more effective. “Medical professionals only turned to technology when it improves accuracy and reduces operating times, and this new equipment allows faster insertion of shoulder implants with pinpoint accuracy,” he said. A CT scan of the patient’s shoulder is downloaded onto the computer and a map of the surgery is created before the patient enters the operating theatre. The navigational tracking tools then provide real-time guidance for

the surgeon to insert the implant. “It’s still me, the surgeon, using my own hands to perform the surgery but the system will provide me with realtime guidance,” Mr Shiu said. “I don’t have to depend on my eye alone; the computer does it for me.” The equipment, yet to be approved in the US, is expected to reduce patients’ time in theatre and all the associated risks and costs. Mr Shiu said there had been many improvements in shoulder replacement surgery in the past 10 years, with the latest technology “one step further” in ensuring that implants work better, function better and last longer.

All ages and abilities welcome!