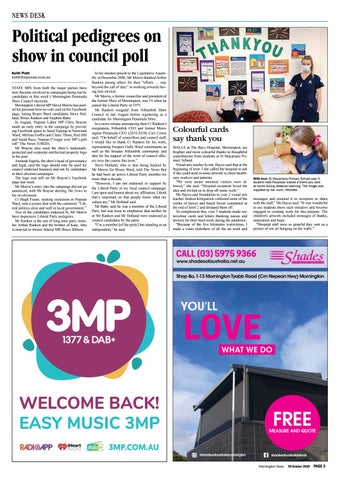 Political pedigrees on show in council poll Keith Platt keith@mpnews.com.au STATE MPs from both the major parties have now become involved in campaigns being run by candidates in this week’s Mornington Peninsula Shire Council elections. Mornington Liberal MP David Morris has posted his personal how-to-vote card on his Facebook page, listing Briars Ward candidates Steve Holland, Bruce Ranken and Stephen Batty. In August, Nepean Labor MP Chris Brayne made an early entry in the campaign by providing Facebook space to Jared Tipping in Seawinds Ward, Melissa Goffin and Claire Thorn, Red Hill and Sarah Race, Nepean (“Anger over MP’s poll roll” The News 31/8/20). Mr Brayne also used the shire’s trademarkprotected and corporate intellectual property logo in his post. Amanda Sapolu, the shire’s head of governance and legal, said the logo should only be used for council endorsed business and not by candidates in their election campaigns. The logo was still on Mr Brayne’s Facebook page last week. Mr Morris’s entry into the campaign did not go unnoticed, with Mr Brayne alerting The News to his involvement. Cr Hugh Fraser, seeking reelection in Nepean Ward, sent a screen shot with the comment: “Liberal politics alive and well in local government.” Two of the candidates endorsed by Mr Morris have impressive Liberal Party pedigrees. Mr Ranken is the son of long time party member Arthur Ranken and the brother of Kate, who is married to former federal MP, Bruce Billson.

In his maiden speech to the Legislative Assembly in December 2006, Mr Morris thanked Arthur Ranken among others for their “efforts … way beyond the call of duty” in working towards having him elected. Mr Morris, a former councillor and president of the former Shire of Mornington, was 19 when he joined the Liberal Party in 1975. Mr Ranken resigned from Nillumbik Shire Council in late August before registering as a candidate for Mornington Peninsula Shire. In a news release announcing then Cr Ranken’s resignation, Nillumbik CEO and former Mornington Peninsula CEO (2014-2018) Carl Cowie said: “On behalf of councillors and council staff, I would like to thank Cr Ranken for his work, representing Swipers Gully Ward constituents as well as the broader Nillumbik community and also for his support of the work of council officers over the course this term.” Steve Holland, who is also being backed by Mr Morris for Briars Ward, told The News that he had been an active Liberal Party member for more than a decade. “However, I am not endorsed or support by the Liberal Party in my local council campaign. I am open and honest about my affiliation, I think that’s important so that people know what my values are,” Mr Holland said. Mr Batty said he was a member of the Liberal Party but was keen to emphasise that neither he or Mr Ranken and Mr Holland were endorsed as council candidates by the party. “I’m a member [of the party] but standing as an independent,” he said.

Colourful cards say thank you WALLS at The Bays Hospital, Mornington, are brighter and more colourful thanks to thoughtful contributions from students at St Macartans Primary School. Visual arts teacher Kristy Hayes said that at the beginning of term 3 she called the hospital to ask if she could send in some artwork to cheer healthcare workers and patients. “We were aware minimal visitors were allowed,” she said. “Hospital reception loved the idea and invited us to drop off some work.” Ms Hayes and foundation to year 2 visual arts teacher Andrea Kirkpatrick collected some of the works of leaves and beach boxes completed at the end of term 2 and dropped them off. To complement this, year 5 students made watercolour cards and letters thanking nurses and doctors for their hard work during the pandemic. “Because of the five kilometre restrictions, I made a video slideshow of all the art work and

messages and emailed it to reception to share with the staff,” Ms Hayes said. “It was wonderful to see students show such initiative and become engaged in creating work for this purpose. The children&#39;s artwork included messages of thanks, inspiration and hope. “Hospital staff were so grateful they sent us a picture of our art hanging on the walls.”