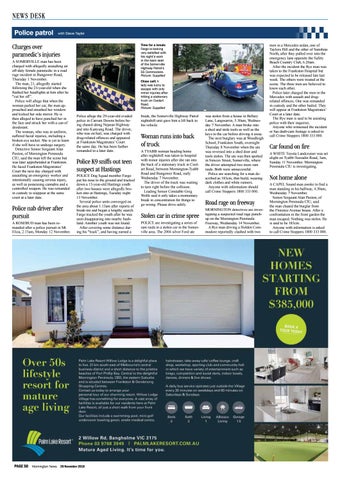 Charges over paramedic’s injuries A SOMERVILLE man has been charged with allegedly assaulting an off-duty female paramedic in a road rage incident in Bungower Road, Thursday 1 November. The man, 21, allegedly started following the 23-year-old when she flashed her headlights at him after he “cut her off”. Police will allege that when the woman parked her car, the man approached and smashed her window and kicked her side mirror. He is then alleged to have punched her in the face and struck her with a can of deodorant. The woman, who was in uniform, suffered facial injuries, including a broken eye socket. She is yet to learn if she will have to undergo surgery. Detective Senior Sergeant Alan Paxton, of Mornington Peninsula CIU, said the man left the scene but was later apprehended at Frankston. He faced Frankston Magistrates’ Court the next day charged with assaulting an emergency worker and intentionally causing serious injury, as well as possessing cannabis and a controlled weapon. He was remanded in custody to reappear at the same court at a later date.

Police nab driver after pursuit A ROSEBUD man has been remanded after a police pursuit in Mt Eliza, 2.15am, Monday 12 November.

Time for a break: Fargo is looking very satisfied with his night’s work in the back seat of the Somerville Highway Patrol’s SS Commodore. Picture: Supplied Close call: A lady was lucky to escape with only minor injuries after hitting a stationary truck on Coolart Road. Picture: Supplied

Police allege the 29-year-old evaded police in Carrum Downs before being chased along Nepean Highway and into Kunyung Road. The driver, who was on bail, was charged with drug-related offences and appeared at Frankston Magistrates’ Court the same day. He has been further remanded to a later date.

POLICE Dog Squad member Fargo put his nose to the ground and tracked down a 15-year-old Hastings youth after two houses were allegedly broken into at Hastings, Tuesday night 13 November. Several police units converged on the area about 1.15am after reports of break-ins and began a lengthy search. Fargo tracked the youth after he was seen disappearing into nearby bushland. Another youth was not found. After covering some distance during his “track”, and having earned a

break, the Somerville Highway Patrol nightshift unit gave him a lift back to his vehicle.

Woman runs into back of truck A TYABB woman heading home after nightshift was taken to hospital with minor injuries after she ran into the back of a stationary truck in Coolart Road, between Mornington-Tyabb Road and Bungower Road, early Wednesday 7 November. The driver of the truck was waiting to turn right before the collision. Leading Senior Constable Greg Wolfe said it only takes a momentary break in concentration for things to go wrong. Please drive safely.

Stolen car in crime spree POLICE are investigating a series of ram raids in a stolen car in the Somerville area. The 2004 silver Ford ute

was stolen from a house in Bellary Lane, Langwarrin, 5.30am, Wednesday 7 November. A man broke into a shed and stole tools as well as the keys to the car before driving it away. The next burglary was at Woodleigh School, Frankston South, overnight Thursday 8 November when the ute was reversed into a shed door and tools stolen. The ute was then spotted in Simcox Street, Somerville, where the driver attempted two more ram raids. Both were unsuccessful. Police are searching for a man described as 183cm, thin build, wearing dark clothes and white runners. Anyone with information should call Crime Stoppers 1800 333 000.

men in a Mercedes sedan, one of Taylors Hill and the other of Sunshine North, after they pulled over into the emergency lane opposite the Safety Beach Country Club, 6.20am. After the incident the Rye man was taken to the Frankston Hospital but was expected to be released late last week. The others were treated at the scene. The three men are believed to know each other. Police later charged the men in the Mercedes with assault and drugrelated offences. One was remanded in custody and the other bailed. They will appear at Frankston Magistrates’ Court at a later date. The Rye man is said to be assisting police with their inquiries. Anyone who witnessed the incident or has dash-cam footage is asked to call Crime Stoppers 1800 333 000.

Not home alone A CAPEL Sound man awoke to find a man standing in his hallway, 4.30am, Wednesday 7 November. Senior Sergeant Alan Paxton, of Mornington Peninsula CIU, said the man chased the burglar from the Florence Avenue house. After a confrontation in the front garden the man escaped. Nothing was stolen. He is said to be 183cm. Anyone with information is asked to call Crime Stoppers 1800 333 000.