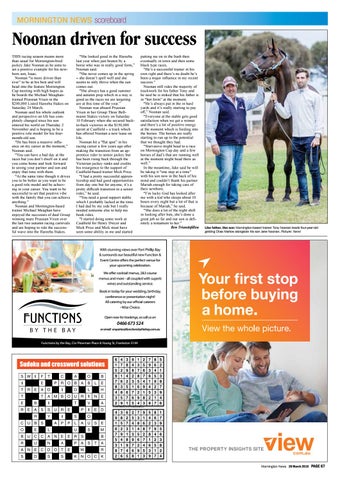 Noonan driven for success THIS racing season means more than usual for Mornington-bred jockey Jake Noonan as he aims to set a positive example for his newborn son, Isaac. Noonan “is more driven than ever” to be at his best and will head into the feature Mornington Cup meeting with high hopes as he boards the Michael Meaghantrained Prussian Vixen in the $200,000 Listed Hareeba Stakes on Saturday 24 March. Noonan said his whole outlook and perspective on life has completely changed since his son entered his world on Thursday 2 November and is hoping to be a positive role model for his fourmonth-old son. “He has been a massive influence on my career at the moment,” Noonan said. “You can have a bad day at the races but you don’t dwell on it and you come home and look forward to seeing your partner and son and enjoy that time with them. “At the same time though it drives you to be better as you want to be a good role model and be achieving in your career. You want to be successful to set that positive vibe with the family that you can achieve anything.” Noonan and Mornington-based trainer Michael Meaghan have enjoyed the successes of dual Group winning mare Prussian Vixen over the last two autumn racing carnivals and are hoping to ride the successful wave into the Hareeba Stakes.

“She looked good in the Hareeba last year when just beaten by a horse who was in really good form,” Noonan said. “She never comes up in the spring – she doesn’t spell well and she seems to only thrive when the sun comes out. “She always has a good summer and autumn prep which in a way is good as the races we are targeting are at this time of the year.” Noonan was aboard Prussian Vixen in her Group Three Bellmaine Stakes victory on Saturday 10 February when she secured backto-back victories in the $150,000 sprint at Caulfield – a track which has offered Noonan a new lease on life. Noonan hit a “flat spot” in his racing career a few years ago after making the transition from an apprentice rider to senior jockey but has been rising back through the Victorian jockey ranks and credits his resurgence to the support of Caulfield-based trainer Mick Price. “I had a pretty successful apprenticeship and had good opportunities from day one but for anyone, it’s a pretty difficult transition to a senior rider,” he said. “You need a good support stable which I probably lacked at the time. I had dad by my side but I really needed someone else to help me book rides. “I started doing some work at Caulfield for Henry Dwyer and Mick Price and Mick must have seen some ability in me and started

putting me on in the bush then eventually in town and then some black type races. “He’s a successful trainer in his own right and there’s no doubt he’s been a major influence in my recent success.” Noonan still rides the majority of trackwork for his father Tony and he said he is stoked that his father is in “hot form” at the moment. “He’s always put in the in hard yards and it’s really starting to pay off,” Noonan said. “Everyone at the stable gets good satisfaction when we get a winner and there’s a lot of positive energy at the moment which is feeding into the horses. The horses are really starting to run up to the potential that we thought they had. “Starvasive might head to a race on Mornington Cup day and a few horses of dad’s that are running well at the moment might head there as well.” In the meantime, Jake said he will be taking it “one step at a time” with his son now in the back of his mind and couldn’t thank his partner Mariah enough for taking care of their newborn. “I’m lucky God has looked after me with a kid who sleeps about 10 hours every night but a lot of that is because of Mariah,” he said. “She does a lot of the night shift in looking after him, she’s done a great job so far and our son is definitely a testament to her.” Ben Triandafillou