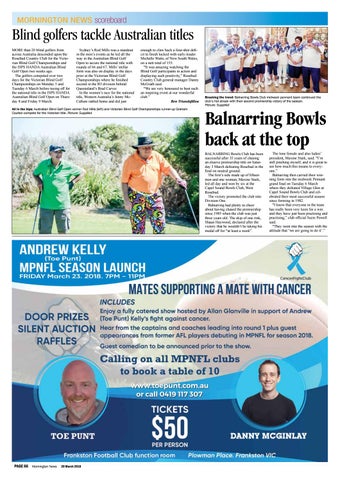 Sydney’s Rod Mills was a standout in the men’s events as he led all the way in the Australian Blind Golf Open to secure the national title with rounds of 66 and 67. Mills’ stellar form was also on display in the days prior at the Victorian Blind Golf Championships where he finished second in the B3 division behind Queensland’s Brad Carver. In the women’s race for the national title, Western Australia’s Jenny McCallum rattled home and did just

enough to claw back a four-shot deficit to finish locked with early-leader Michelle Watts, of New South Wales, on a nett total of 155. “It was amazing watching the Blind Golf participants in action and displaying such positivity,” Rosebud Country Club general manager Danny McGrath said. “We are very honoured to host such an inspiring event at our wonderful club.” Ben Triandafillou

Balnarring Bowls back at the top BALNARRING Bowls Club has been successful after 35 years of chasing an elusive premiership title on Saturday 3 March defeating Rosebud in the final on neutral ground. The first’s side made up of fifteen men and one woman, Maxine Stark, led all day and won by six at the Capel Sound Bowls Club, West Rosebud. The victory promoted the club into Division One. Balnarring had plenty to cheer about having chased the premiership since 1985 when the club was just three years old. The skip of one rink, Shaun Haywood, declared after the victory that he wouldn’t be taking his medal off for “at least a week”.

The lone female and also ladies’ president, Maxine Stark, said: “I’m still pinching myself, and it is great to see how much this means to everyone.” Balnarring then carried their winning form into the midweek Pennant grand final on Tuesday 6 March where they defeated Village Glen at Capel Sound Bowls Club and celebrated their most successful season since forming in 1982. “I know that everyone in the team has really been very keen for a win and they have just been practising and practising,” club official Suzie Powell said. “They went into the season with the attitude that ‘we are going to do it’.”