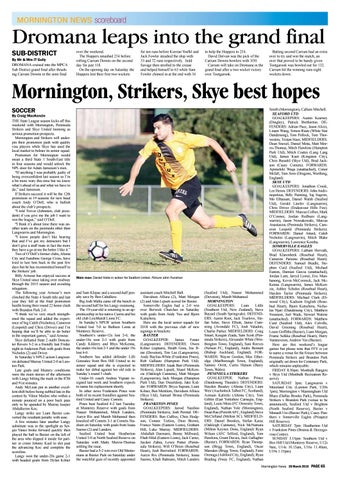 over the weekend. The Hoppers smashed 254 before rolling Carrum Downs on the second day for just 118. On the opening day on Saturday the Hoppers lost their first two wickets

for ten runs before Kierran Voelkl and Jack Fowler steadied the ship with 53 and 72 runs respectively. Jedd Savage then strolled to the crease and helped himself to 63 while Sam Fowler chimed in at the end with 34

to help the Hoppers to 254. David Dervan was the pick of the Carrum Downs bowlers with 3/50. Carrum will take on Dromana in the grand final after a two wicket victory over Tootgarook.

Batting second Carrum had an extra over to try and win the match, an over that proved to be handy given Tootgarook was bowled out for 132. Carrum hit the winning runs eight wickets down.

By Craig MacKenzie THE State League season kicks off this weekend with Mornington, Peninsula Strikers and Skye United looming as serious promotion prospects. Mornington and Strikers will underpin their promotion push with quality visa players while Skye has used the local market to bolster its senior squad. Promotion for Mornington would mean a third State 1 South-East title in four seasons and would unlock the NPL door for Adam Jamieson’s men. “If anything I was probably guilty of being overconfident last season so I’m a bit more wary this time but we know what’s ahead of us and what we have to do,” said Jamieson. If Strikers succeed it will be the 12th promotion in 19 seasons for new head coach Andy O’Dell, who is bullish about the club’s prospects. “I told Trevor (Johnston, club president) if you give me the job I want to win the league,” said O’Dell. “I think it’s about time there was another team on the peninsula other than Langwarrin and Mornington. “I know people don’t like hearing that and I’ve got my detractors but I don’t give a stuff mate in fact the more they have a go at me the better I like it.” Two of O’Dell’s former clubs, Altona City and Sunshine George Cross, have tried to lure him back in the past few days but he has recommitted himself to the Strikers’ job. Billy Armour has enjoyed success at Skye United since taking over midway through the 2015 season and avoiding relegation. The following year Armour’s men clinched the State 4 South title and last year they fell at the final promotion hurdle losing their round 22 home clash with Brandon Park 2-0. “I think we’ve very much strengthened the squad and added the experience of big Caleb (Nicholes), Cameron (Leopold) and Chris (Driver) and I’m hoping that we’ll be able to do better in the important games,” said Armour. Skye defeated State 2 outfit Doncaster Rovers 3-2 in a friendly last Friday night at Anderson Park with goals from Nicholes (2) and Driver. In Saturday’s NPL2 action Langwarrin defeated Murray United 2-0 at Lawton Park. Late goals and blustery conditions were the main stories of the afternoon with Langy hitting the mark in the 87th and 91st minutes. Andy McLean put in another excellent shift before being subbed late in the contest by Viktor Medini who within a minute pounced on a poor back pass only to be upended by Murray keeper Abdulkerim Koc. Langy strike ace Liam Baxter converted the resultant penalty with ease. A few minutes later another Langy substitute was in the spotlight as Sergio Yanez broke forward quickly then played the ball to Baxter on the left of the area who slipped it inside for partner in crime Johnny Kuol to slot past the advancing Koc and complete the scoreline. Langy won the under-20s game 2-1 with headed goals from Dylan Kilner

and Sam Klepac and a second-half penalty save by Ben Caballero. Big Josh Mulla came off the bench in the second half for his Langy swansong. The 19-year-old is returning to an apprenticeship in his native Cairns and his old club Leichhardt Lions FC. In Sunday’s NPLW action Southern United lost 7-0 to Bulleen Lions at Monterey Reserve. Southern’s under-12s lost 2-0, the under-14s won 2-1 with goals from Candy Kilderry and Rhys McKenna, the under-16s lost 2-1 and the under 19s lost 4-0. Southern has added defender Lilli Gonzalez from Box Hill United to its senior squad and she is expected to make her debut against her old side in Sunday’s round 5 clash. Under-16 coach Andrea Vignati resigned last week and Southern expects to name his replacement shortly. In other news Frankston Pines won both of its recent friendlies against Seaford United and Casey Comets. Pines beat Seaford 4-2 last Tuesday at Monterey Reserve with goals from Naseer Mohammed, Mitch Landers, Aaryn Rix and Munib Mohamed then knocked off Comets 3-1 at Comets Stadium on Saturday with goals from Ioasa Saemo (2) and Landers. Seaford United beat Heatherton United 1-0 at North Seaford Reserve on Saturday with Matty Morris-Thomas settling the issue. Baxter had a 5-2 win over Old Mentonians at Baxter Park on Saturday under the watchful gaze of recently appointed