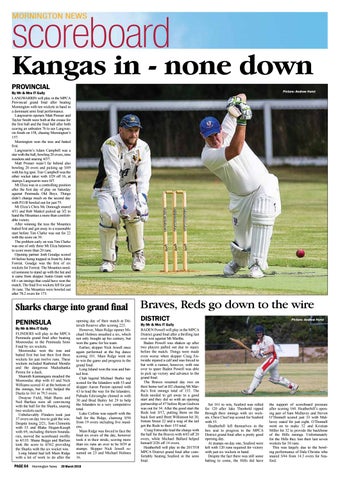 Kangas in - none down PROVINCIAL

By Mr & Mrs IT Gully LANGWARRIN will play in the MPCA Provincial grand final after beating Mornington with ten wickets in hand in a dominant semi final performance. Langwarrin openers Matt Prosser and Taylor Smith were both at the crease for the first ball and the final ball after both scoring an unbeaten 76 to see Langwarrin finish on 158, chasing Mornington’s 157. Mornington won the toss and batted first. Langwarrin’s Adam Campbell was a star with the ball, bowling 20 overs, nine maidens and snaring 4/37. Matt Prosser wasn’t far behind also bowling 20 overs and picking up 5/49 with his leg spin. Trav Campbell was the other wicket taker with 1/29 off 16, at stumps Langwarrin were 0/7. Mt Eliza was in a controlling position after the first day of play on Saturday against Peninsula Old Boys. Things didn’t change much on the second day with P.O.B bowled out for just 75. Mt Eliza’s Chris Mc Donough snared 4/11 and Rob Maskel picked up 3/2 to hand the Mounties a more than comfortable victory. After winning the toss the Mounties batted first and got away to a reasonable start before Tim Clarke was out for 22 with the score on 39. The problem early on was Tim Clarke was one of only three Mt Eliza batsmen to score more than 20 runs. Opening partner Josh Goudge scored 44 before being trapped in front by John Forrest. Goudge was the first of six wickets for Forrest. The Mounties needed someone to stand up with the bat and it came from skipper Justin Grant with 68 – an innings that could have won the match. The final five wickets fell for just 36 runs. The Mounties were bowled out after 78.2 overs for 173.

By Mr & Mrs IT Gully FLINDERS will play in the MPCA Peninsula grand final after beating Moorooduc in the Peninsula Semi Final by six wickets. Moorooduc won the toss and batted first but lost their first three wickets for just twelve runs. These wickets included Rashimal Mendis and the dangerous Madushanka Perera for a duck. Shamith Kannangara steadied the Moorooduc ship with 43 and Nick Williams scored 41 at the bottom of the innings, but it only helped the Ducks to 161 in 79.5 overs. Dwayne Field, Matt Burns and Neil Barfuss were all convincing with the ball for the Sharks, snaring two wickets each. Unbelievably Flinders took just 37 overs on day two to grab the win. Despite losing 2/21, Tom Clements with 53 and Blake Hogan-Keogh with 69, including thirteen boundaries, moved the scoreboard swiftly to 4/135. Shane Beggs and Barfuss took the score to 4/162 providing the Sharks with the six wicket win. Long Island had left Main Ridge with a lot of work to do after the

opening day of their match at Ditterich Reserve after scoring 225. However, Main Ridge opener Michael Holmes smashed a six, which not only bought up his century, but won the game for his team. Earlier, skipper Nick Jewell once again performed at the big dance scoring 101. Main Ridge went on to win the game and progress to the grand final. Long Island won the toss and batted first. Club legend Michael Burke top scored for the Islanders with 53 and skipper Aaron Paxton opened with 43 to lead the way for the Islanders. Pubudu Edirisinghe chimed in with 30 and Brad Bailey hit 29 to help the Islanders to a very competitive total. Luke Collins was superb with the ball for the Ridge, claiming 5/50 from 19 overs including five maidens. Main Ridge was forced to face the final six overs of the day, however took it in their stride, scoring more than six runs an over to be 0/39 at stumps. Skipper Nick Jewell resumed on 23 and Michael Holmes 16.

Braves, Reds go down to the wire DISTRICT

By Mr & Mrs IT Gully BADEN Powell will play in the MPCA District grand final after a thrilling last over win against Mt Martha. Baden Powell was shaken up after two players pulled out due to injury before the match. Things were made even worse when skipper Craig Entwistle injured a calf and was forced to bat with a runner, however, with one over to spare Baden Powell was able to pick up victory and advance to the grand final. The Braves resumed day two on their home turf at 0/2 chasing Mt Martha’s first innings total of 155. The Reds needed to get away to a good start and they did so with an opening partnership of 47 before Ryan Godwin was out for 34. After the good start the Reds lost 3/17, putting them on the back foot until Brett Wilkinson hit 30, Simon Street 22 and a wag of the tail got the Reds to their 155 total. Craig Entwistle lead the charge with the ball for the Braves with 4/45 off 20 overs, while Michael Ballard helped himself 2/26 off 14 overs. Heatherhill will play in the 2017/18 MPCA District grand final after comfortably beating Seaford in the semi final.

Set 161 to win, Seaford was rolled for 120 after Jake Theobold ripped through their innings with six wickets. Chris Cleef top scored for Seaford with 55. Heatherhill left themselves in the box seat to progress to the MPCA District grand final after a pretty good opening day. At stumps on day one, Seaford were left with 120 runs required for victory with just six wickets in hand. Despite the fact there was still some batting to come, the Hills did have

the support of scoreboard pressure after scoring 160. Heatherhill’s opening pair of Sam Mullavey and Steven O’Donnell scored just 33 with Mullavey outed for just eight. O’Donnell went on to make 52 and Kristian Miller hit 32 to provide the backbone of the Hills innings. Unfortunately for the Hills they lost their last seven wickets for 50 runs. This was largely due to the bowling performance of Dale Christie who snared 5/44 from 14.5 overs for Seaford.