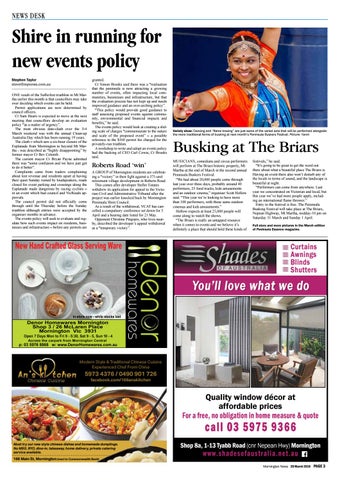 Shire in running for new events policy Stephen Taylor steve@mpnews.com.au ONE result of the Sufferfest triathlon in Mt Martha earlier this month is that councillors may take over deciding which events can be held. Permit applications are now determined by council officers. Cr Sam Hearn is expected to move at the next meeting that councillors develop an evaluation policy “as a matter of urgency”. The most obvious date-clash over the 3-4 March weekend was with the annual Clean-up Australia Day which has been running 19 years. The clash – which saw a six-hour closure of the Esplanade from Mornington to beyond Mt Martha - was described as “highly disappointing” by former mayor Cr Bev Colomb. The current mayor Cr Bryan Payne admitted there was “some confusion and we have just got to do it better”. Complaints came from traders complaining about lost revenue and residents upset at having their quiet Sunday ruined by loudspeakers, roads closed for event parking and crossings along the Esplanade made dangerous by racing cyclists – in an event which had council and VicRoads approvals. The council permit did not officially come through until the Thursday before the Sunday triathlon although entries were accepted by the organiser months in advance. The events policy will seek to evaluate and regulate how such events impact on residents, businesses and infrastructure – before any permits are

granted. Cr Simon Brooks said there was a “realisation that the peninsula is now attracting a growing number of events, often impacting local communities, businesses and infrastructure, but that the evaluation process has not kept up and needs improved guidance and an over-arching policy”. “This policy would provide good guidance to staff assessing proposed events against community, environmental and financial impacts and benefits,” he said. The events policy would look at creating a sliding scale of charges “commensurate to the nature and scale of the proposed event” – a possible reference to the $160 permit fee charged for the privately-run triathlon. A workshop to write and adopt an events policy had the backing of CEO Carl Cowie, Cr Brooks said.

Roberts Road ‘win’ A GROUP of Mornington residents are celebrating a “victory” in their fight against a 371-unit retirement village development in Roberts Road. This comes after developer Steller Estates withdrew its application for appeal to the Victorian Civil and Administrative Tribunal after the project was earlier knocked back by Mornington Peninsula Shire Council. As a result of the withdrawal, VCAT has cancelled a compulsory conference set down for 5 April and a hearing date listed for 21 May. Opponent Christine Pingiaro, who lives nearby, described the developer’s appeal withdrawal as a “temporary victory”.

Variety show: Dancing and “flame trowing” are just some of the varied acts that will be performed alongside the more traditional forms of busking at next month’s Peninsula Buskers Festival. Picture: Yanni

Busking at The Briars MUSICIANS, comedians and circus performers will perform at The Briars historic property, Mt Martha at the end of March in the second annual Peninsula Buskers Festival. “We had about 20,000 people come through last year over three days, probably around 40 performers, 25 food trucks, kids amusements and an outdoor cinema,” organiser Scott Hollow said. “This year we’re looking to have more than 100 performers, with those same outdoor cinemas and kids amusements.” Hollow expects at least 25,000 people will come along to watch the shows. “The Briars is really an untapped resource when it comes to events and we believe it’s definitely a place that should hold these kinds of

festivals,” he said. “It’s going to be great to get the word out there about what a beautiful place The Briars is. Having an event there also won’t disturb any of the locals in terms of sound, and the landscape is beautiful at night. “Performers can come from anywhere. Last year we concentrated on Victorian and local, but this year we’ve had more people apply, including an international flame thrower.” Entry to the festival is free. The Peninsula Busking Festival will take place at The Briars, Nepean Highway, Mt Martha, midday-10 pm on Saturday 31 March and Sunday 1 April. Full story and more pictures in the March edition of Peninsula Essence magazine.