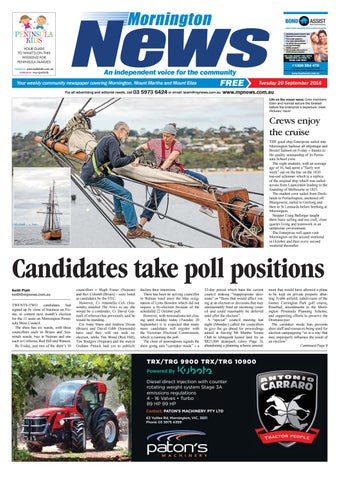 Crews enjoy the cruise THE good ship Enterprize sailed into Mornington harbour all shipshape and Bristol fashion on Friday – thanks to the quality seamanship of its Peninsula School crew. The eight students, with an average age of 16, had spent a “fairly wet week” out on the bay on the 1830 top-sail schooner which is a replica of the original ship which was sailed across from Launceston leading to the founding of Melbourne in 1835. The student crew sailed from Docklands to Portarlington, anchored off Blairgowrie, sailed to Geelong and then to St Leonards before berthing at Mornington. Skipper Craig Ballinger taught them basic sailing and sea craft, close quarter living and teamwork in an unfamiliar environment. The Enterprize will again visit Mornington on the second weekend in October and then every second weekend thereafter.

Candidates take poll positions Keith Platt keith@mpnews.com.au TWENTY-TWO candidates had signed up by close of business on Friday to contest next month’s election for the 11 seats on Mornington Peninsula Shire Council. The shire has six wards, with three councillors each in Briars and Seawinds wards, two in Nepean and one each in Cerberus, Red Hill and Watson. By Friday, just two of the shire’s 10

councillors – Hugh Fraser (Nepean) and Bev Colomb (Briars) - were listed as candidates by the VEC. However, Cr Antonella Celi (Seawinds) emailed The News to say she would be a contender; Cr David Garnock (Cerberus) has previously said he would be standing. Crs Anne Shaw and Andrew Dixon (Briars) and David Gibb (Seawinds) have said they will not seek reelection, while Tim Wood (Red Hill), Tim Rodgers (Nepean) and the mayor Graham Pittock had yet to publicly

declare their intentions. There has been no serving councillor in Watson ward since the May resignation of Lynn Bowden which did not require a by-election because of the scheduled 22 October poll. However, with nominations not closing until midday today (Tuesday 20 September) it is expected that many more candidates will register with the Victorian Electoral Commission, which is running the poll. The close of nominations signals the shire going into “caretaker mode” – a

32-day period which bans the current council making “inappropriate decisions” or “those that would affect voting at an election or decisions that may unreasonably bind an incoming council and could reasonably be deferred until after the election”. A “special” council meeting last night (Monday) called for councillors to give the go ahead for proceedings aimed at forcing Mt Martha Tennis Club to relinquish leased land for an $825,000 skatepark (story Page 3); abandoning a planning scheme amend-

ment that would have allowed a plane to be kept on private property abutting Tyabb airfield; subdivision of the former Carrington Park golf course, Rosebud; amendments to the Mornington Peninsula Planning Scheme; and supporting efforts to preserve the Dromana pier. The caretaker mode ban prevents shire staff and resources being used for election campaigning “or in a way that may improperly influence the result of an election”. Continued Page 9